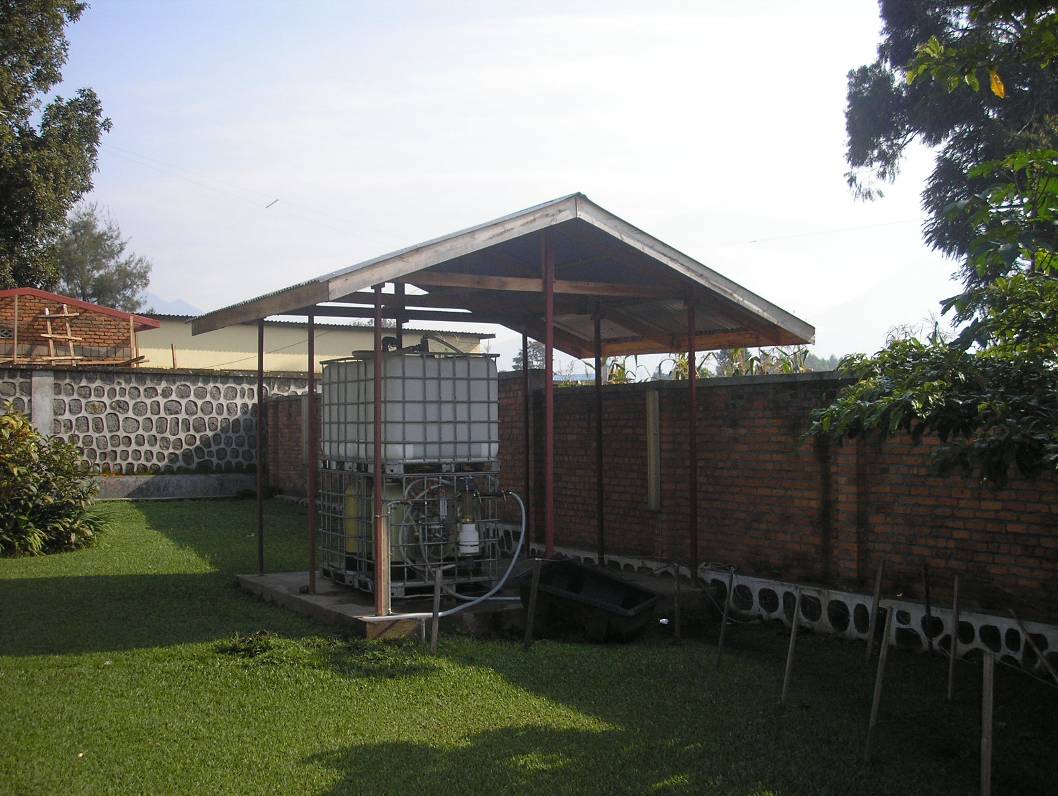 Plagued by a legacy of civil war, ethnic genocide and the HIV/AIDS epidemic, many rural communities in Rwanda lack access to adequate drinking water. Although many inhabitants purify water by boiling, this time-consuming and energy-intensive practice is impractical for most. 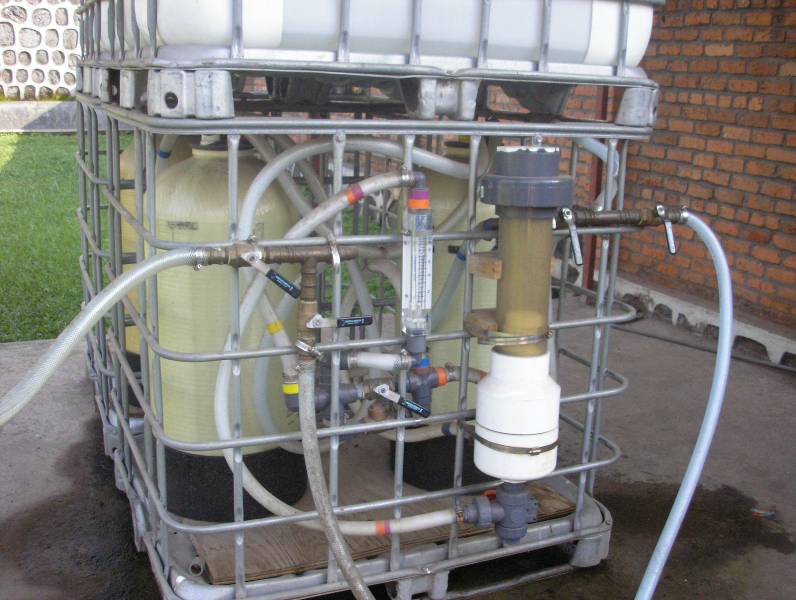 A water and power utility provides drinking water to the capital, Kigali City, and all urban centers of Rwanda, while rural areas are supplied by natural springs or surface water sources. In many rural areas of the country, taps are accessible every few kilometers along most major and secondary roads, but water quality is inconsistent.

The Sonrise School in Rwanda uses sand filters and chlorine
tablets to treat water for drinking, cleaning and bathing.
Plumbing problems forced the school to take the system offline.

Furthermore, despite the wide availability of piped water, much is still collected from rivers and streams and there are a variety of concerns with the water quality in the region, including pathogenic bacteria, viruses and protozoa. Not all residents can afford or have access to the wood or charcoal needed to boil water, so the risk of infection is high.

The antiquated process at Sonrise School
The kitchen staff at Sonrise School once needed to boil about 265 gallons of water over wood fires each day. They had to physically carry vats of boiling hot water to pour into 80-gallon barrels used to store water that is drawn for washing and drinking. In the past few years, there have been two incidents in which kitchen workers suffered serious burn injuries from the scalding water.

Chlorine powder is available in Rwanda, but only in Kigali, and at a high cost, since the powder is imported. As a result, boiling is considered the only viable solution for water disinfection in this scenario.

However, boiled water with no chlorine residual is susceptible to recontamination once the water has cooled. In addition to the immediate risk posed to community members, the non-managed harvesting of limited resources for fuel has led to soil erosion and other problems associated with nutrient loss.

Emmanuel Ignance, the school’s full-time water manager, received a sand filter/chlorine tablet disinfection system from a charitable organization. However, because the school’s plumbing is not adequate to pressurize the sand filter with enough capacity to carry water for the kitchen, laundry, showers, taps and for drinking, the unit is presently offline while the school awaits a plumbing upgrade. In addition, only expensive imported chlorine tablets are available.

Volunteer efforts
Mark and Peg Henjum live in Colorado Springs, CO. Mark is an IT specialist at Agilent Technologies and has been active in volunteer service activities for over 30 years. He and Peg became involved with Rwanda in 2004 and recently completed their third trip.

Through the Rwandan Anglican Diocese, they have been involved with projects that include housing for returned refugees, fair trade coffee, microenterprise loans, agricultural and other cooperatives and a health clinic. The couple wished to expand their involvement with the Diocese to include a water project that would deliver potable water to communities in Rwanda. In the fall of 2006, the Henjums decided to take three portable, briefcase-sized mixed oxidant generation systems to Rwanda and train church and community members in water disinfection technology.

Peg visited the donating company headquarters in February 2006 to solicit the company’s assistance. When Mark and Bob Parsons (a fellow volunteer and general contractor based in Colorado Springs) returned later to pick up the units, they learned how to assemble, operate and troubleshoot the systems. They also learned how to conduct water quality studies, determine correct dosage and measure free available chlorine under varying water conditions.

In July 2007, Henjum returned to the Sonrise School to deliver the BPS systems and train community members to operate and apply the concentrated chlorine-based disinfectant properly. Now in its seventh year of operation, the Sonrise boarding school—launched in 2001 by Bishop John Rucyahana to be a ‘light on a hill’— is considered one of the top academic schools in Rwanda, based on recent national exams.

The school has 1,000 students, teachers, dorm parents and security guards. Sonrise is continuing to expand, adding one grade per year to the school. The first secondary grade-six class (equivalent to the US high school senior year) will graduate at the end of 2010.

The Sonrise community solution
Ignace and four of his co-community members at Sonrise School now use the self-contained, portable BPS system to create a chlorine-based disinfectant through the electrolysis of a dilute brine solution. The non-automated system is ideal for small-scale water disinfection, especially for the treatment of drinking water.

Due to the portability of the unit, water is also disinfected at the school’s guesthouse, allowing it to serve an additional 200 people. The guesthouse is a separate enterprise owned and operated by the Anglican Diocese as a conference center and hotel for visitors and tourists, the cathedral and the Diocesan offices.

The chlorine residual in the treated water allows the Sonrise community to continue to obtain their water from the same sources and residents have gradually been adapting to the taste of the ‘new’ water. When dosing raw water at  one mg/L, residuals between 0.5 and 1.0 mg/L were obtained. When dosing with mixed-oxidants, recommended treatment conditions for ensuring adequate elimination of Cryptosporidia are a five mg/L FAC residual and four-hour contact time.

Separate containers are used to store the brine solution (which is manually mixed to the proper concentration) and to collect the disinfecting oxidant solution as it is generated from the cell. The unit has two posts for connection to a 12V DC battery or solar power, as well as a terminal plug for 110/220 VAC operation.

The system generates enough disinfectant to purify 30,000 gallons (113 m3) of water a day at a dose of two mg/L. Henjum worked with engineers from the donating company to adapt a dosing methodology that would be successful using vessels and materials available in Rwanda. 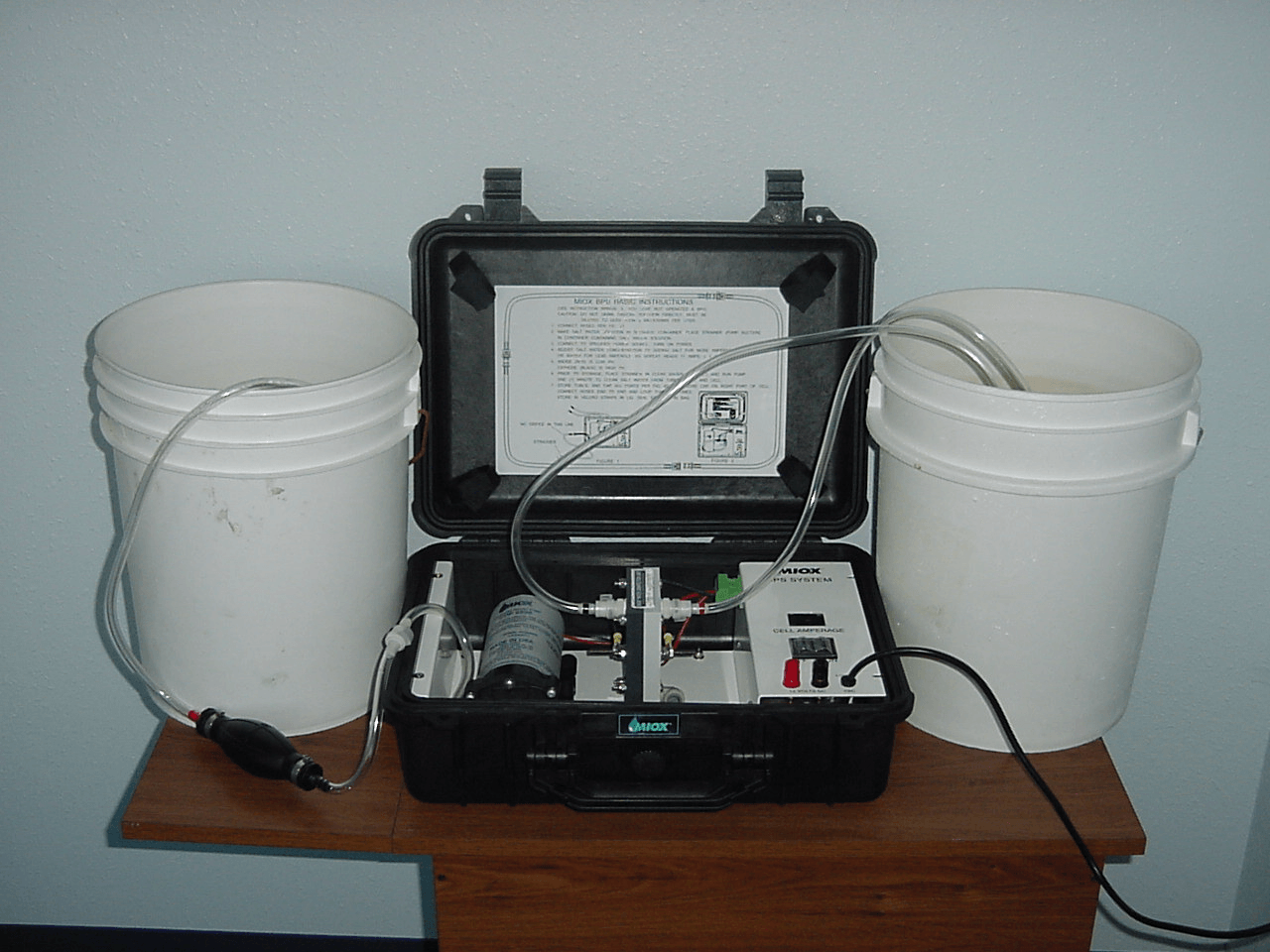 The normal product methodology and protocols were adapted to ensure that the community’s water disinfection needs would be met by proper dosing with oxidant from the BPS. The training process for the participating community members included learning how to determine the necessary dosing requirements and accurately measure chlorine residual.

The MIOX Brine Pump System (BPS) is a portable unit that uses
electrolysis of a dilute brine solution to safely and quickly create a
chlorine-based disinfectant effective for treating drinking water in Rwanda.

Henjum also used his professional training to further develop the dosing and measurement protocol. “Another interesting measurement adaptation I innovated was to calibrate drinking straws for use in (oxidant) demand studies and testing for free chlorine in small quantities of treated water,” said Henjum.

“The straws are everywhere, used with bottled soft-drinks. So I taught the residents how to calibrate a straw by filling it 10 times, putting the liquid in a small calibrated cylinder and dividing by 10 to determine the total volume of the straw. Typically the volumes were five mL—then I used a marker to show one mL increments.” 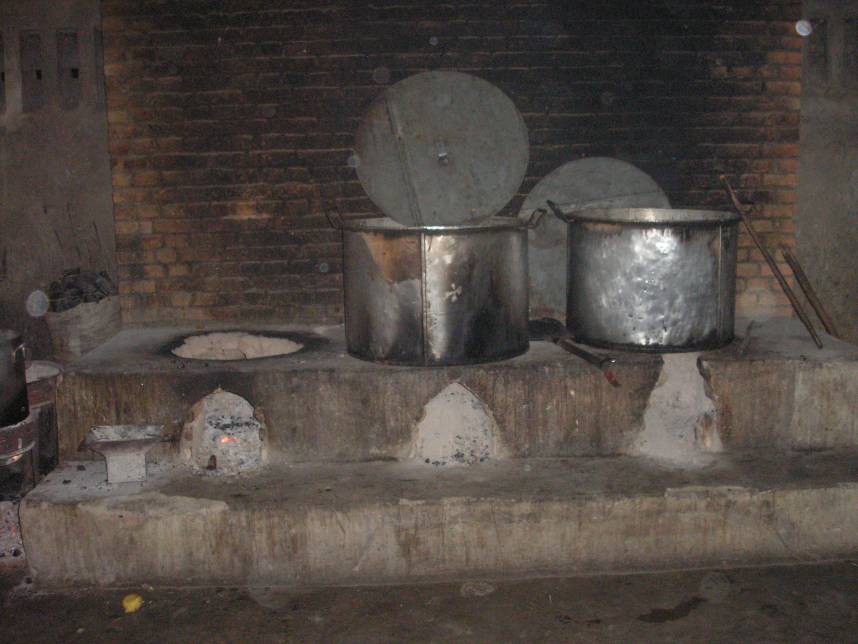 Stove for cooking and boiling water and latrine. 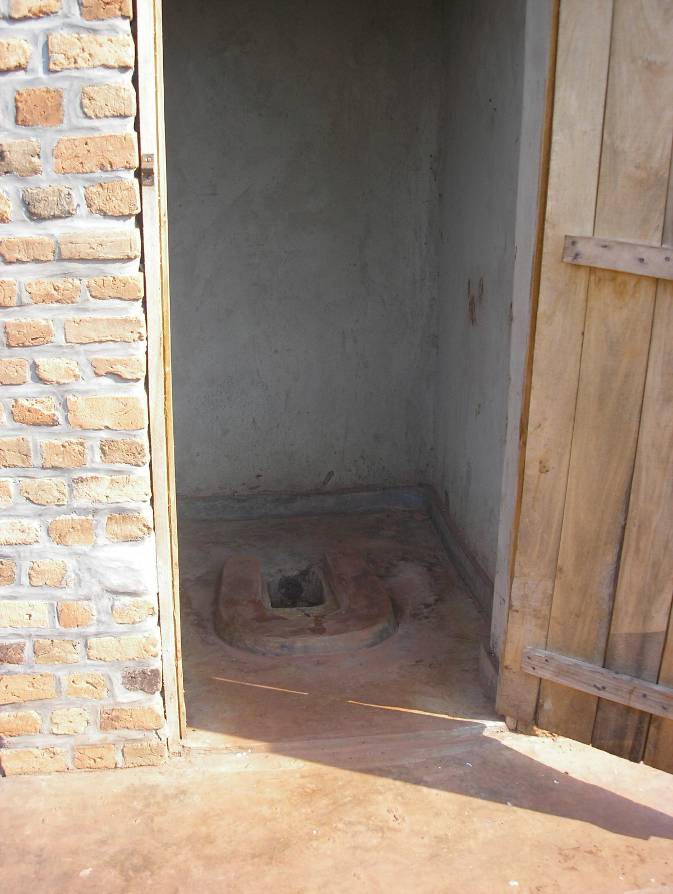 At the completion of training, these individuals were able to provide safe drinking water to the entire Sonrise community. Henjum enjoyed ‘watching the light go on’ for the three dorm parents and one science teacher that he had trained. “They’re all very competent and very disciplined. The science teacher was a big help when it came to explaining the oxidant chemistry to the group and plans to use the system as a teaching aid in his chemistry class,” added Henjum.

“The team was very nervous about actually starting to use the solution, so they had a big ceremony to calibrate the barrels used to store boiled water and then apply the first dose. The next week, students returned and started drinking treated water for the new school term.” 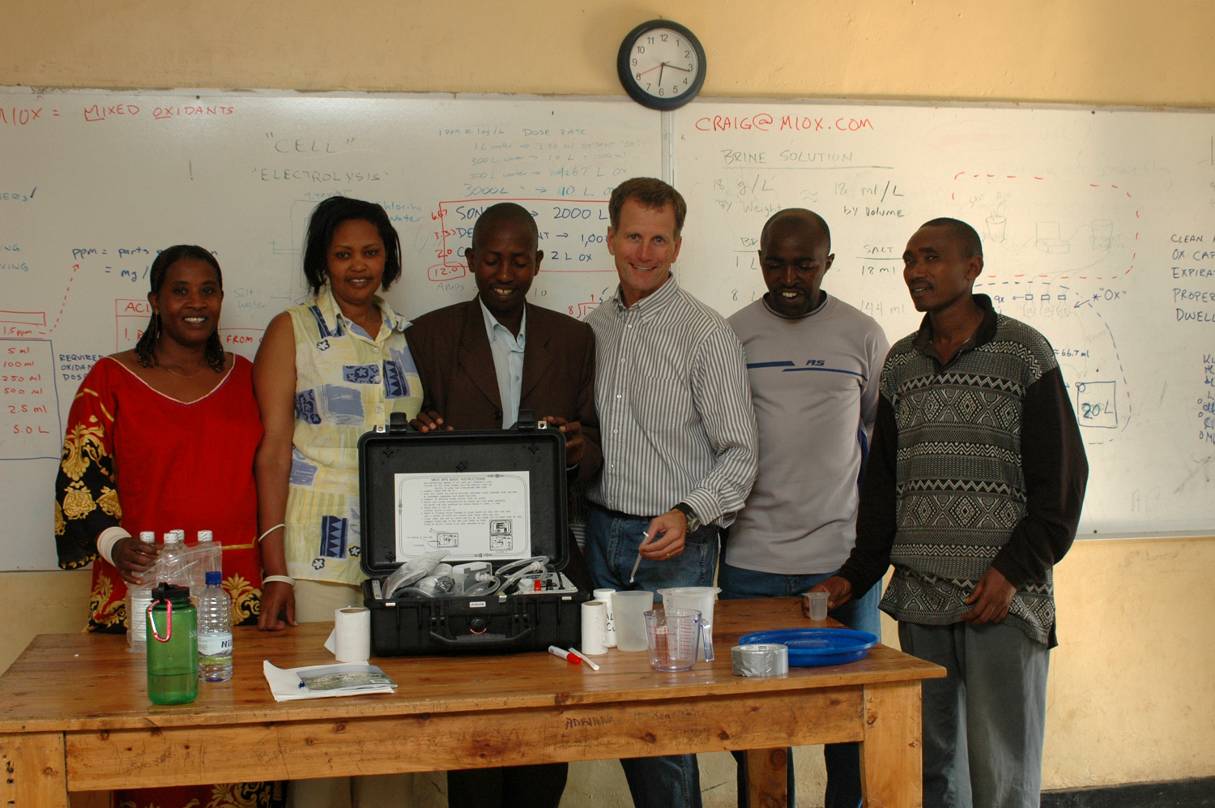 The donated BPS system was originally implemented as an intermediate water treatment solution to sustain the supply of safe drinking water for residents and guests of the boarding house while the permanent plumbing system awaited maintenance. However, the production of disinfectant solution is much greater than the school’s current demand.

The Sonrise team is working on new applications for the treatment system to service the boarding school and Diocese guesthouse. As a result of this success, the school is also considering a permanent switch to on-site generation for their disinfection needs. 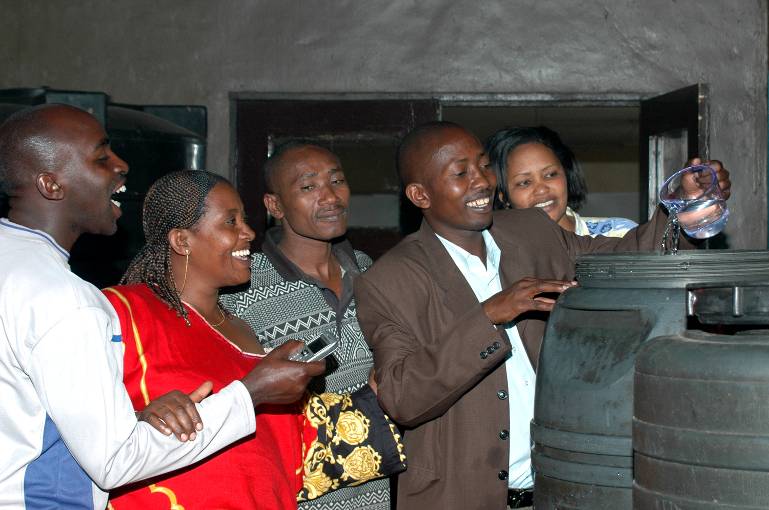 In addition to the important safety benefits associated with eliminating storage of chlorine, Sonrise School has found that the cumulative salt and electricity consumption for electrolysis is less expensive than the chlorine tablets required for their former system. With the successes thus far, the near-term goal at Sonrise is to also use the mixed oxidant technology at the nearby Bigogwe Clinic and two other locations in the country: rural Byumba and in Kibungo, bordering Tanzania.

About the author
Craig Milroy is involved with electrochemical cell design, water treatment process engineering and oxidant speciation studies at MIOX Corporation. He received a Master’s Degree in civil and environmental engineering and a Master’s Degree in public health from the University of California-Berkeley. Milroy spent seven years in Brazil working as an engineer and epidemiologist/statistician with the Federal University of Brazil, Instituto Oswaldo Cruz, Centers for Disease Control and Prevention, Pan American Health Organization and several CH2M Hill engineering consortia.

About MIOX Corporation
MIOX Corporation, based in Albuquerque, NM, is focused on solving one of the world’s most pressing issues: the need for affordable, safe and healthy water. MIOX’s patented water disinfection technology replaces the need to purchase, transport and store dangerous chemicals. The company donated the Brine Pump Systems (BPS™) to the Rwanda effort. Their products are used in over 30 countries and in hundreds of communities across the US for public drinking water systems, water reuse projects and a variety of commercial and industrial applications. More information is available at www.miox.com.

The MIOX Brine Pump System (BPS) is a portable unit thatused electrolysis of a dilute brine solution to safely and quickly creates a chlorine-based disinfectant effective for treating drinking water in Rwanda. 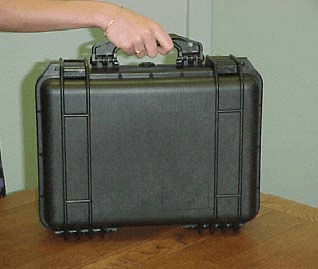