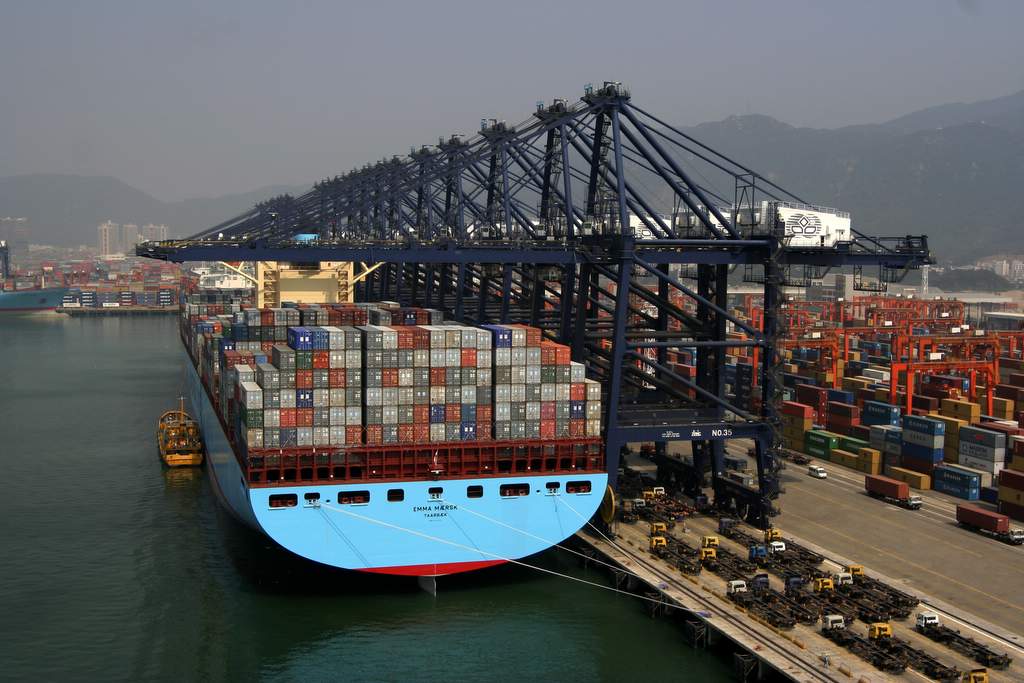 High-power, compact UV systems are now being used to prevent the transit across the globe of a wide variety of organisms in ships’ ballast water. Ballast water is taken on board in ports of call to maintain stability when the vessel is not laden and discharged as the vessel becomes laden with cargo.

This small system discharge is often released thousands of miles from the port of embarkation and relocates microscopic plants, mussels, crabs and recently, the fish pathogen viral hemorrhagic septicaemia (VHS)1 far from their native range. 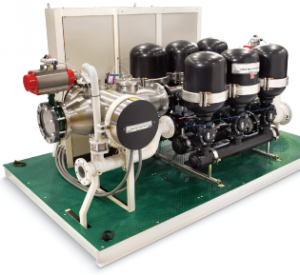 UV systems are being incorporated in packages that use separation technology to prepare the ballast water to be disinfected using UV light prior to discharge. The UV systems are compact, use high power polychromatic lamps, have automatic wiping mechanisms and are generally configured with lamps at right angles to the flow.

This orientation saves space and eliminates bends, which are detrimental to flow profiles before and after the UV chambers. Medium-pressure lamps are most often used in this application, as their compact size permits a small treatment footprint, allowing skid mounting and safe lamp removal.

Approximately 75 percent of these vessels are involved in intercontinental trade. The asymmetric nature of this trade means that occasionally container vessels arrive laden into US ports from China and embark empty, ballasted with water taken on board in the US.

Likewise, coal and iron ore carriers arrive empty into Australian or South American ports fully ballasted with water. And they discharge this ballast water prior to taking cargo on board. Ballast water is also often used as a trim aid in port when loading or unloading cargo.

It is estimated that 7,0003 species are transported in ships ballast water. The majority of these species do not survive the ballasting/de-ballasting cycle, as the environment within the ballast tanks is hostile and not conducive to permit colonies of organisms to survive. Those that do survive, however, are usually hardy. And they frequently out-compete indigenous species, surviving to establish a reproducing population.

Invasive threat
Over 1004 non-native species of marine organisms are known to have been introduced globally by ballast water.While some appear benign, others are a threat to biodiversity, fisheries and aquaculture.

The US National Oceanic and Atmospheric Administration (NOAA) views the threat of invasion by these species as “the greatest immediate threat to most coastal state ecosystems.”5 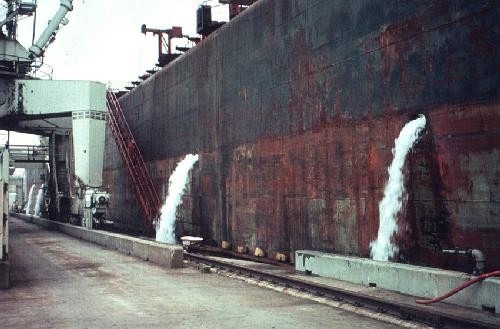 Some introduced species severely deplete native populations or deprive them of food. Others form colonies that can damage other existing fauna.

Introduced toxic dinoflagellates cause red tides and algal blooms that can affect or even kill shellfish, fish and sea birds. When eaten by humans, these contaminated shellfish can cause paralysis or even fatality. In southern Australia and along the west coast of the US, the Asian kelp Undaria pinnatifida is rapidly invading new areas, displacing the native seabed communities.

In the Black Sea, filter-feeding North American jellyfish (Mnemiopsis leidyi) have on occasion reached densities of two lbs of biomass per nine cubic ft. This culprit has depleted native zooplankton stocks to such an extent that it contributed to the collapse of entire Black Sea commercial fisheries in the 1990s.

Salt marsh cordgrass (Spartina alterniflora) once used as packing material for Atlantic oysters (Crassostrea virginica), has been introduced into Oregon. The cordgrass continues to spread along the Oregon coast, taking over mudflats and disrupting bird migrations.

The fish pathogen VHS was reported in the Great Lakes area in 20036. The rapid transfer of the virus through all of the waterways frequented by vessels dumping ballast is no coincidence.

The Chinese mitten crab (Eriocheir sinensis) was banned for importation and aquaculture in the US in the late 1980s; however, the crab was discovered in San Francisco Bay in 1994. Introduction by ballast water is the probable source. The crab burrows into riverbanks, dykes and levees causing erosion and siltation.

The solution
The United Nations’ International Maritime Organization (IMO) has a number of initiatives underway at this time to address the issue of non-indigenous species transit and invasion and to address pollution of the ocean and fresh water areas. The Ballast Water Management (BWM) convention was published in 2004 and has a target implementation date of 2009. MARPOL 73/78 (International Convention for Prevention of Pollution from Ships) covers the discharge of sewage at sea and came into force in 2003. 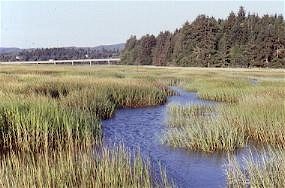 Two methods are proposed to mitigate the threat of species transfer: either ballast water treatment (BWT) or ballast water exchange (BWE). BWE is available only to those non-coastal vessels that can exchange ballast water mid-ocean.

This is a time-consuming and potentially hazardous exercise, as it involves the vessel stopping or slowing considerably and exposes hull structures to stress. A number of ship designers are now developing ‘no stop’ BWE systems or vessel designs that eliminate the need for ballast water altogether.

For BWE regimes, a 95 percent volumetric exchange of ballast water is required. This is measured as three times the volume of the ballast tank exchange. 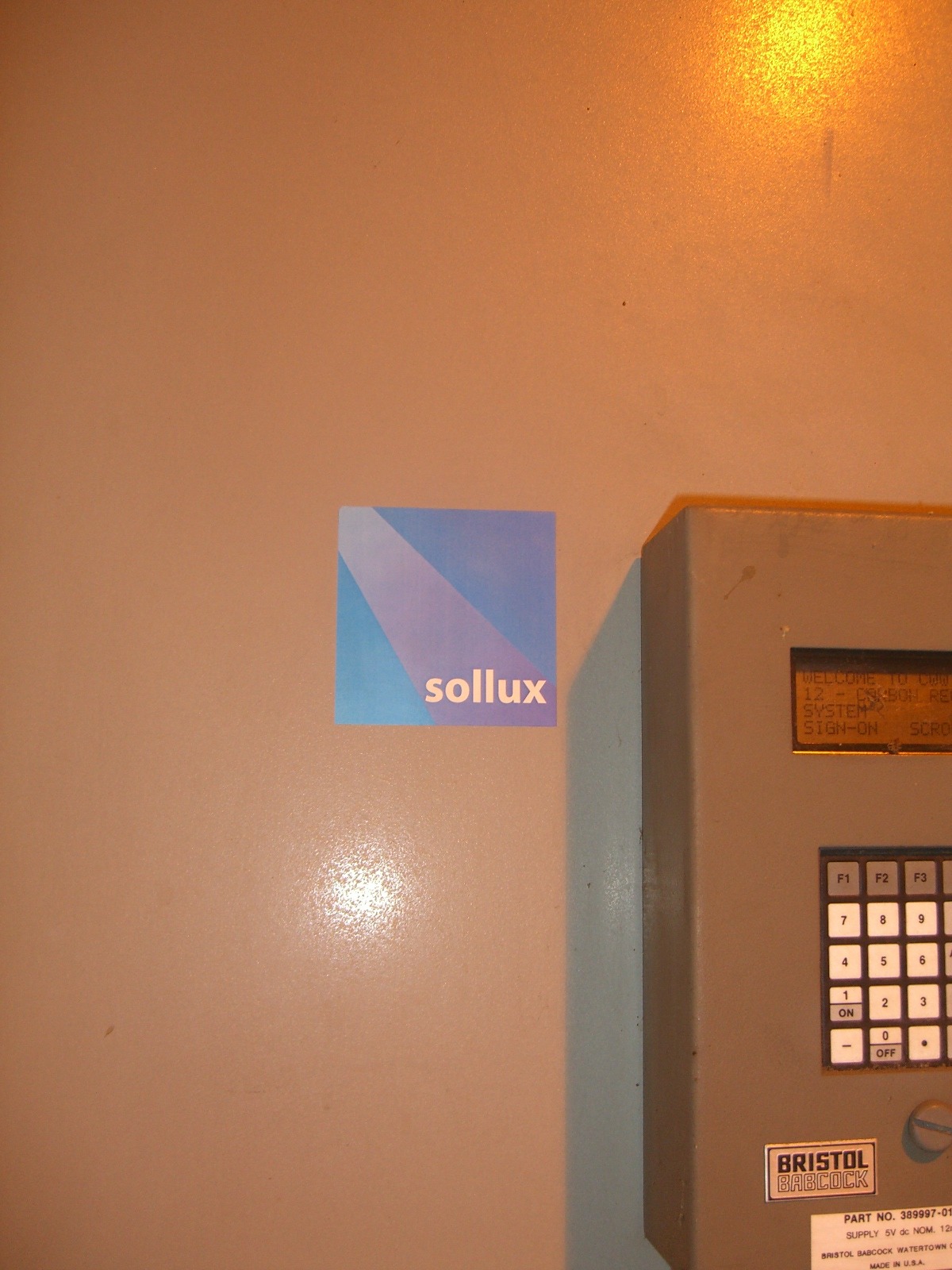 convention. In 2016, all vessels will be required to treat their ballast water to comply with these microbial levels.

In April 2008, the US House of Representatives approved regulations requiring all saltwater ships entering US ports to treat their ballast water by 2016. The bill (HR 2830) sets a more demanding disinfection standard than the IMO protocol and requires that the number of organisms greater than 50 microns in minimum dimension be reduced to fewer than 10 living organisms per cubic meter of water in the discharged ballast water.

Chemical or biocide-based methods of disinfecting ballast water are unattractive from a number of perspectives. The proximity of bulk chemicals poses handling and storage risk to the ships crew and often a de-chlorination process is required to ensure that no active substance or residual is discharged.

A number of innovative suppliers are enhancing the production of hydroxyl radicals with the exposure of an accelerant such as titanium dioxide to UV light. A dedicated joint group of experts on the scientific aspects of marine environmental protection (GESAMP)7 now has a ballast water technical work group (Work Group 34) in place.

The focus of Work Group 34 is to determine what risk is posed by the discharge of a variety of active substances. Hydroxyl species are a novel addition to their usual list of chemical residuals to investigate. These reactive species are very short lived and the ballast water has a high hydroxyl demand. 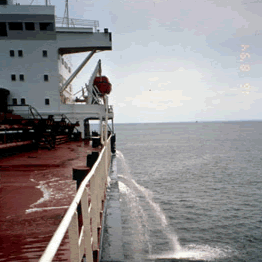 How does UV work?
The ballast water is prepared for UV disinfection using a variety of filters or cyclonic separators. The systems are usually skid mounted and automated; the UV systems have automatic wiping and the filters automatic backwashing.

UV works by permanently damaging the DNA of all living organisms. The damaged (or dimerized) DNA is no longer able to support normal cell function and the organism is rendered non viable.

The sizing of the UV system is determined by: (a) flow rate; (b) transmittance of the fluid to ultraviolet light and (c) the dose requirement. The method is non- intrusive and does not alter the chemistry, color or physical property of the ballast water.

Different organisms have demonstrated varied resistance to UV. A growing number of organisms are being found to be highly resistant to chlorine and many of these emerging pathogens are effectively disinfected using UV.

UV dose is expressed in mJ cm-2. Most of the leading UV manufacturers use CFD (computational fluid dynamics) models to predict the performance of the UV systems.

Working in partnership with BWT system providers, they use a variety of validation techniques to determine the actual UV system performance in the BWT process.

Preparation of ballast water is very important, as color, suspended solids and particulates would render the UV ineffective.

CFD modeling expertise and accuracy has advanced significantly in the last five years. And leading UV system manufacturers such as Sollux, Trojan and ATG use proprietary software models to integrate flow and radiation profiles.

The flow profile is produced from the chamber geometry, flow rate and particular turbulence model selected.

The radiation profile is developed from inputs such as water quality, lamp type (power, germicidal efficiency, spectral output, arc length) and the transmittance and dimension of the quartz sleeve.

Proprietary CFD software simulates both flow and radiation profiles. Once a 3-D model of the chamber is built, it is populated with a grid or mesh that comprises thousands of small cubes.

Points of interest (such as at a bend) or the quartz sleeve surface or around the wiper mechanism use a higher resolution mesh, while other areas within the reactor use a coarse mesh. Once the mesh is produced, hundreds of thousands of virtual particles are ‘fired’ through the chamber.

Each particle has several variables of interest associated with it and the particles are ‘harvested’ after the reactor. 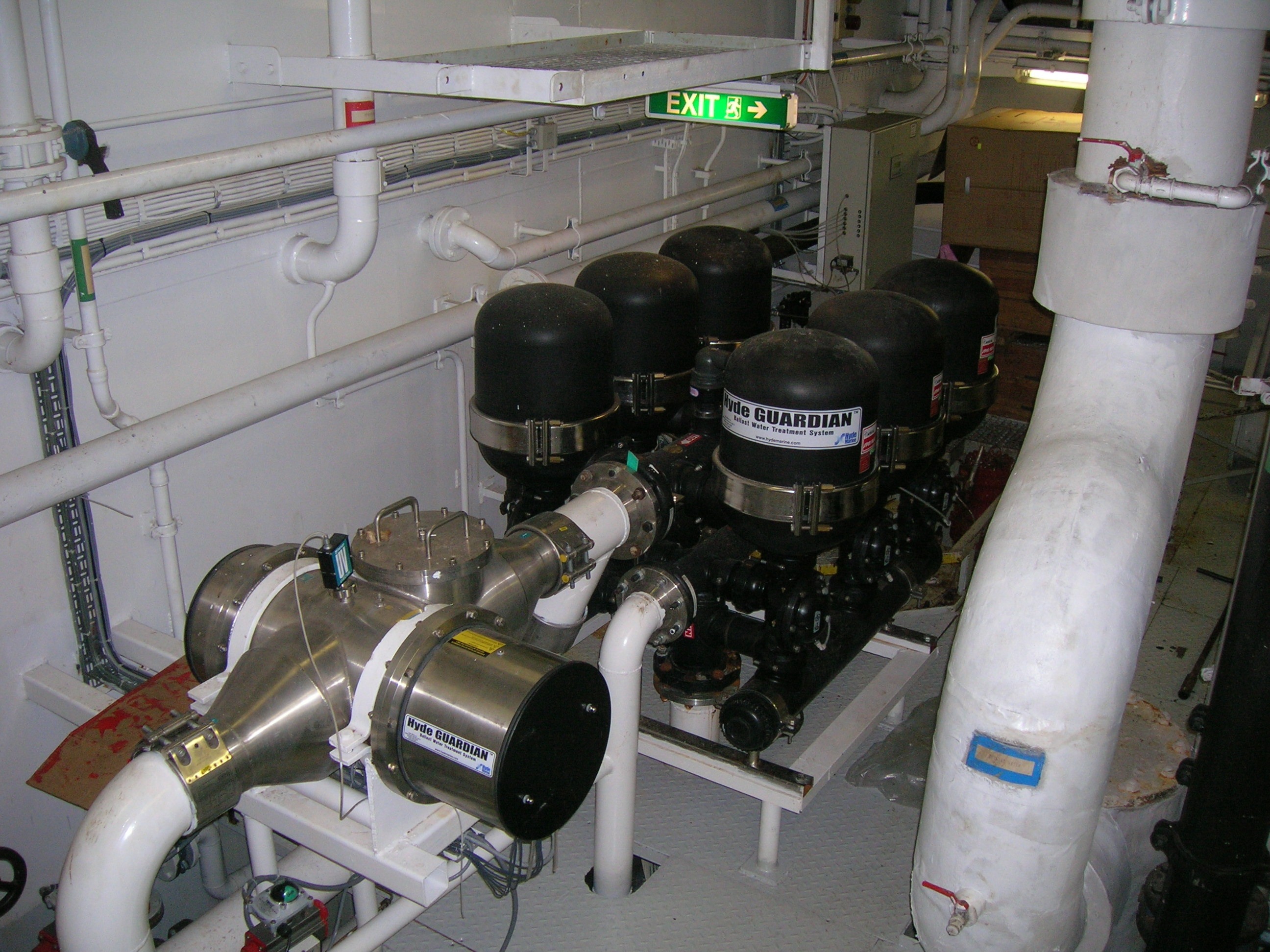 For system approval, on-shore and ship-based process validation is conducted to ensure that the system is capable of performing as required.

Fouling of quartz sleeves can occur and prevent the UV light from penetrating into the water. Iron is often present in ballast/bilge water, as the marine environment is aggressive and materials coming into contact with it need to be carefully selected. In addition to iron, ballast water can often contain oils and lubricants and has a high oxygen demand. Effective wipers are critical to the UV system performance.

BWT systems are now also being evaluated as part of the US Coast Guard STEP8 program in the US and are undergoing IMO-type approval through the UK Maritime and Coastguard Agency (MCA) in cooperation with Lloyd’s Register.

Conclusion
Much damage has been done by the inadvertent transit through ballast discharge of a great many nuisance species. However, it does seem that this area is finally getting the attention it deserves.

UV systems are rapidly gaining acceptance as part of small system ballast water treatment packages. Performance of the UV system depends critically on the ability of the upstream filters and separators to adequately treat the ballast water.

Ratification and implementation of the IMO ballast water management convention will soon make it a criminal act to discharge untreated ballast water. Neither the very international nature of the shipping business, nor the intense competitive pressures caused by high and rising fuel costs will be acceptable reasons for non-compliance. Nor will the absence of a global regulation for such small systems be acceptable.

About the author
Jon McClean was the President of Aquionics Inc. until April, 2008. Prior to this, he was Managing Director of Hanovia Ltd. in Great Britain. He presents papers at conferences and frequently publishes articles about UV disinfection and photolysis. McClean can be reached at [email protected].