Normally, when the members of the Pacific Water Quality Association (PWQA) get together for a barbecue on a sunny afternoon, they gather in good fellowship with smiles all around. This year was different, as AB2270 spread a distinct pall over the group. Attendance is always strong at these twice yearly lunches, but the threat of this pending legislation brought many more to Performance Water Products’ facility in Buena Park, the day’s sponsor. They had set up patio tables, umbrellas, tents and a podium in the breezy sun of their front lot which were soon filled with members and their employees. Stenner Pump Company sent their van and new California Regional Sales Manager Ed Johnson supplied technical manuals and product information.

PWQA’s lobbyist, Pete Conaty, had bad news to share. Despite the work of his firm, testimony by PWQA and the many letters filed by PWQA members and their supporters throughout the country, AB2270 was unanimously voted forward out of committee. Conaty explained that the next step would be the suspense file, where there might be an opportunity to testify yet again. After that there would be a short gap, during which PWQA would finalize its opposition strategy into proposed amendments, which must be submitted to Assemblyman Laird, the author of the bill, by May 16th. “We must redouble our efforts to get letters to the Governor,” Conaty instructed, as that strategy may ultimately be our best defense. Culligan’s lobbyist, Gene Erbin, is working with Conaty to thwart this legislation. Many firms in the industry have marshaled either lobbying support or letter writing campaigns in support of these efforts (GE Water & Process Technologies, Hague Quality Water International, Rayne Corporation, EcoWater – the list goes on and on). In addition, Home Depot, Sears and other retails have joined the fight.

(Editor’s note: In the ensuing weeks, Conaty’s prediction proved correct and the bill went into suspense. Laird waived presentation, so neither Conaty nor anyone else had an opportunity to testify. Bills in the suspense file were taken up May 21/22.) 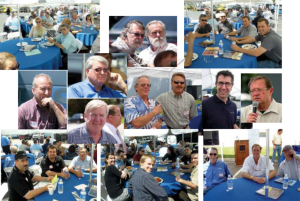 Larry Dick was the keynote speaker. Currently running for a seat in California’s State Assembly, he has been recognized as Small Business Owner of the Year in his role as President and CEO of the La Salle Group. He began his water-related activities by serving on the Board of the Serrano Water District in 1997 and was elected to the Municipal Water District of Orange County Board of Directors in 2000. In 2003, Dick was appointed to the influential Metropolitan Water District of Southern California. The Board of Directors selected him as Chairman of MWD’s Audit Committee charged with reviewing the financial and day-to-day operations of MWD. Dick also serves as an active member of the statewide Association of California Water Agencies. Amid charming anecdotes of both politics and business, he gave the audience a broad overview of how the Southern California water regulatory groups operate.

One of the key objections to AB2270, as currently written, is the fact that it would give water quality control boards, non-elected individuals who are simply appointed by fiat, the power to make a finding (not defined) that they need to control salinity by banning residential water softeners. Dick’s information about these Boards made it clear these fears are well founded.

Inland Empire Utility is one of the supporters of this proposed legislation. Readers may recall that this is the entity that worked side by side with PWQA to reduce chlorides in their service area via the Pinch the Salt program. Many members felt the utility’s outspoken support of this prohibitive bill was a very personal betrayal. Martha Davis, who had coordinated the joint program, bravely came to the barbecue to speak with crowd. “You can throw tomatoes at me if you wish,” she began, “but I hope you’ll hear me out first.”

Davis told the crowd that she remains a friend of the industry and asked for solutions. “We’re already regulating the industrial and commercial sector. Yet the chloride levels continue to increase,” she noted. Davis called for innovative thinking, technological solutions and a commitment to working together for the region’s wellbeing. By the time she finished, she’d earned the respect of the crowd – without being pummeled by vegetables.

Various members of the PWQA board took the podium and encouraged continued active participation against the threat. Folks enjoyed the traditional Wisconsin brats, provided once again by Pentair – and cooked to perfection by Sid Korob of PIP with the help of Mark Mecca of Performance Water. Each guest was given a copy of the state’s legislative roster so they could easily look up their legislators and write, phone or fax them directly. Plans were made for this year’s convention, which will be held in Anaheim October 16-17.