Ozone Treatment of Iron, Manganese and Sulfide Ion – Part I

In recent years, the Water Quality Association (WQA) has noted an increase in the use of ozone (O3) as part of private point of entry (POE) and small public water treatment processes for the oxidation of iron, manganese and sulfide ion. In cases when other technologies fail to complete the oxidation of these inorganics as pretreatment to physical filtration, ozone has been applied with significant success.

The WQA Ozone Task Force has written this paper with the intention to provide technical guidance to those considering, or currently employing ozone for the purpose of oxidation. This three part series will begin discussing the fundamentals of ozone’s oxidation in regards to iron, manganese, and sulfide ions and also the oxidation of organic compounds. The second segment will cover ozone generation, the solubility of ozone, and the mass transfer of ozone. The conclusion of this series will address the means of measuring ozone in water, the amount of ozone required and finally, with the completion of the oxidation process, what is required for the physical filtration process. 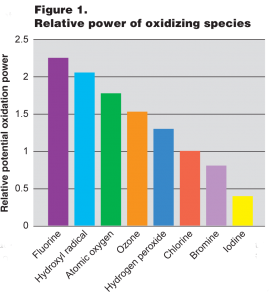 Fundamental aspects of oxidation
Oxidizers are substances that remove electrons, or negative charges, from ions in solution that leaves them with a net increase in positive charge. Oxidizers can be used in an oxidation-reduction (redox) reaction, where one reactant is reduced by gaining one or more electrons, while giving up one or more electrons, therby oxidizing the other reactant. For instance, this is the process of conversion of iron from Fe+2 to Fe+3. Oxidation alone does not ’remove‘ inorganic ions; it simply changes the chemical and physical nature, enabling other technologies (such as physical filtration) to remove them from a process stream. In addition to ozone, other oxidizers in common use today include oxygen, chlorine, peroxide and permanganate.

Organic compounds can also be oxidized, but as a rule they require much higher energies for complete oxidation. All organics will theoretically oxidize to CO2 and H2O, but completing the oxidation process of some inorganics (especially those held within water supplies that contain higher concentrations of organic compounds) can be problematic with more conventional oxidation technologies. Ozone has the unique ability to break the carbon bonds of organic compounds. This underscores ozone’s utility over other technologies for oxidation of inorganic ions. Furthermore, ozone (given the absence of bromide) will not create trihalomethanes (THMs) as a result of the oxidation of organic compounds, unlike other oxidizers such as chlorine. In addition to these, ozone has long been considered the best commercially viable technology for the inactivation of the full spectrum of microbial contaminants, including viruses, bacteria and protozoan cysts/oocysts.

The power of an oxidant to oxidize involves both kinetics (oxidation power) and stoichiometry (refer to Figures 1 and 2). In other words, both the overall strength of the oxidant and the speed with which it works should be considered together. It is tempting to rank oxidants and use this ranking when considering different techniques; however, this is ill advised. For example, hydrogen peroxide is a more powerful oxidant than chlorine; however, its kinetics are such that in water it is very slow to act, often too slow to be of practical application. Conversely, using hydrogen peroxide in combination with UV light, or with ozone – to form the hydroxyl radical, a very powerful and fast oxidant – is difficult to control as it exists only for nanoseconds. In the same way, other oxidants may be unacceptable for use in water treatment; either the kinetics are too slow, or they produce by-products that are either aesthetically objectionable or in some cases toxic.

Oxidation of iron, manganese, sulfide and organic compounds
Typically, iron and manganese are found in well water in the soluble ferrous iron (Fe2+) and manganous (Mn2+) forms. While both are divalent (consisting of two fewer electrons, thus a double positive electronic charge), iron can only be oxidized to ferric iron (Fe3+). Manganous(Mn2+) can be oxidized to manganic manganese(Mn4+), which forms a brown-black particle (MnO2) ; however, it can also take the form (Mn3+), which forms red-violet particles (MnO-OH).

Ferrous iron oxidation products include FeO (a black oxide), Fe2O3 (a red oxide) (CONFIRM IF THE FORMULA SHOULD BE CHANGED TO FERIC, OR THE PIECE OF INFORMATION MOVED BELOW TO FERROUS) and Fe(OH)2 I(iron hydroxide)a filterable precipitate. Ferric and Manganic oxidation products are most commonly found as Fe(OH)2 (iron hydroxide) and MnO2 (manganic dioxide). Fe(OH)3 is a large, gelatinous precipitate, which is easily removed by media filtration. MnO2 forms a finer, less gelatinous precipitate and is more susceptible to breakthrough in direct filtration processes; however, manganic dioxide can agglomerate with iron hydroxide when both are present, dramatically improving removal efficiency.

Thus, when ozone is used for treating soluble iron problems, the iron is oxidized to an insoluble product that can be removed by filtration.

The oxidation of ferrous iron with ozone is rapid (within a few minutes), as long as the pH of the water being treated is maintained above 7.0, preferably over 7.5; however, the amounts required of the specific oxidizing agent differ widely. Figure 2 shows the theoretical stoichiometric amounts of oxidizing agent required to oxidize one mg/L of ferrous iron to ferric iron. (DO YOU WISH TO ADD MANGANESE OR SULPHUR FORMULAS AS IONICE SPECIES FIGURES?) 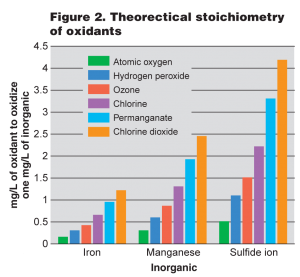 Caution: Iron that complexes with other substances, such as humic acid, may require higher oxidant amounts and longer contact times to destroy the complexes and to complete the oxidation and iron precipitation process. Water quality characteristics, such as pH, temperature, concentrations of other oxidant demanding substances and the solubility of the oxidizing agent in the water, all impact the practical amounts of the oxidizing agents necessary to achieve effective oxidation.

Excessive and extended ozonation, however, can oxidize both di- and tetravalent manganese to the soluble permanganate form:

The permanganate ion is purple in color and, in low concentrations, imparts a pink color to the ozonated water; however, it may be removed easily from the water by passage of the ozonated water through a reducing medium such as granular activated carbon (GAC), which reduces the septavalent permanganate (Mn7+) back to the insoluble tetravalent (Mn4+) form that is physically filtered out of the water:

The optimum pH range for oxidation of Mn2+ to the insoluble tetravalent form is above 8.0, considerably higher than the optimum range for iron (7.0 or higher). Theoretical amounts of various oxidizing agents required to oxidize one mg/L of manganous ion (Mn2+) to its insoluble oxydihydroxide are listed in Figure 2.

It is clear that considerably more oxidant is required to oxidize manganous ion than ferrous ion. In addition, if the approach of oxidizing manganese with ozone to the permanganate stage, then reducing permanganate to MnO(OH)2 by passage through GAC is practiced, even more ozone will be required per mg/L of manganese originally present. For this approach to manganese removal, only ozone is strong enough to take the manganese to the permanganate ion in a short period of time. Manganese oxidation with ozone, in theory, requires up to 20 minutes to complete, contrasting with the much shorter time required for the oxidation of ferrous iron

Sulfide ion oxidation with ozone
Both sulfide ion (S2-) and hydrogen sulfide (H2S) can be present in ground water where biodegradation of organic matter has occurred. Dissolved oxygen is used during aerobic microbial digestion of organic matter, and when the oxygen is depleted, anaerobic micro organisms begin to flourish. Under anaerobic conditions, H2S–a toxic gas with a characteristic rotten egg smell and offensive taste– is formed.  Aqueous dissociation of hydrogen sulfide (H2S) to HS1- and S2- is pH dependant (pKa1 = 6.88, pKa2 = 14.15 at 25oC). This means that at pH 6.88, half of the hydrogen sulfide is ‘H2S’ and half ‘HS1-‘, and as the pH increases, more S2- forms.

One of the processes most applicable to the treatment of sulfide ion and hydrogen sulfide gas in potable water supplies is oxidation with ozone.

Or an overall reaction of:

The product of ozone oxidation is sulfate ion (SO42-) requiring an ozone/sulfide stoichiometric ratio of 4/1; however, oxygen remaining in the carrier gas used to make ozone also reacts to reduce the amount of ozone necessary to complete the oxidation reaction to sulfate ion.

Note: If an oxidant of lesser strength is used, such as air (21 percent O2) or chlorine, the product of oxidation will be elemental sulfur. This benign product is a small particle and not easily removed by filtration.

Dissolved organic compound oxidation with ozone
Well water may contain organic material from many different sources. Ozone has the ability to oxidize iron, manganese and sulfide within water supplies rich in natural organic matter (NOM). This underscores its utility over other oxidation technologies, as oxidation of organic compounds is included in this section.

Ozone can be used to oxidize many organic contaminants to reduce the levels in water and wastewater. The presence of electrophilic elements on a compound has an inhibitory effect on oxidation.

The most common sources of color in water are organic compounds, which are decomposition products of natural organic compounds (vegetation) containing aromatic rings. Color causing organic matter falling into this classification include humic and fulvic acids. These organic acids contain one or more carboxylic groups (COOH) with an active hydrogen ion (H+). If the active H+ is neutralized (e.g., by higher pH or alkalinity), the remaining carboxylic group (-COO1-) can act as a cation exchange site.”

The resulting oxidized organics absorb light differently, causing changes in refractive index and visible color reduction. This oxidation process may result in increased biodegradable organic carbon (BDOC), which is measured as assimilable organic carbon (AOC). If the BDOC/AOC is not removed or the effluent sufficiently post chlorinated, increased non-pathogenic bacterial growth may result in the distribution system due to this food source.

Conclusion
It is easy to see why more and more private point of entry (POE) and small public water treatment systems are moving towards ozone for the oxidation of iron, manganese, sulfide ion and even micro organisms. With ozone’s ability to be produced on-site and the elimination of impurities in the water that can cause foul tastes and odors , the handling and consumption of harsh chemicals can be a thing of the past.

With a better understanding of how ozone is used, the next segment will discuss how ozone is generated through ultraviolet (UV) light or corona discharge (CD) ozone generators; not all forms of ozone are created equal! These two methods create a fundamental difference in the concentration of ozone produced. The final segment will delve into the physical means of mass transfer, the typical methods of mixing ozone gas into the water and which one is better than the other.

About WQA–Ozone Task Force
The Water Quality Association’s Ozone Task Force was organized in 1995 to develop performance criteria and education materials related to ozone technology for water purification applications. The WQA-OTF is made up of twelve active members of the ozone consulting and manufacturing community. The group meets twice a year to discuss and update information and issues in the realm of ozone water purification. For more information regarding the Ozone Task Force, email info3zone@io3a.org.