In May, Pentair, Inc. and GE Water & Process Technologies began discussions to establish a joint venture to combine their respective global water softener and residential water filtration businesses. The combined businesses had 2007 net sales of approximately $450 million. Under the current discussion framework, Pentair would own approximately 80 percent of the joint venture interests and GE Water & Process Technologies would own approximately 20 percent. Pentair will not comment further on the status of these discussions until they are concluded.?

To celebrate its environment-friendly products, Carbon Resources will begin packaging coconut shell carbons in green poly bags, starting with 55-pound bags. The company’s new joint-venture plant in Mexico chars coconut shells in a kiln instead of the traditional pit charring that emits large amounts of carbon dioxide into the atmosphere.?

GE and the GE Foundation donated more than US $4.3 million (RMB 30 million) in cash and equipment for relief efforts after the massive May earthquake in China. Donations included water purification, emergency lighting, X-ray, anesthesia, ultrasound, monitoring and other equipment dispatched to hospitals and communities within the first week after the earthquake. More than 7,000 GE employees in greater China have contributed US $891,000 (RMB 6.2 million) in cash and matching gifts to the Red Cross Society of China.?

The International Bottled Water Association (IBWA) announced that it supports the inclusion of a proposed $275 million increase for funding the US Food and Drug Administration (FDA). As part of Sen. Robert C. Byrd’s (D-WV) FY 2008 Emergency Supplemental, consumers would benefit from the funding increase to enhance food safety programs. Bottled water is a packaged food product regulated by FDA, which mandates standards for production, health, packaging, and labeling.

William A. Bryant, President and CEO of Robertson Worldwide and Dale G. Marcus have acquired all of the outstanding ownership interest of Robertson Transformer Company, dba Robertson Worldwide. Marcus has also assumed the role of Chief Financial Officer. The company is a US-based design house and manufacturer of electronic and magnetic ballasts for high performance lighting, product supplier its products to mainstream OEM lighting manufacturers, air and water quality device manufacturers and suppliers of ruggedized and military lighting applications. The transaction will facilitate continued development of next generation ballast technologies for energy conscious architects, designers and lighting suppliers.

The National Water Research Institute (NWRI) announced its latest report, A Global Perspective of Low Pressure Membranes, is available for download at www.nwri-usa.org/e-publications. Prepared by David Furukawa, P.E., Ch.E. of Separation Consultants, Inc., an expert on membrane technologies, the 13-page report includes discussions on industry growth, installed capacity and application, global market and costs, and conclusions. The data comprise the results from 13 companies who provided information on their installations (representing more than 90 percent of all installed plants worldwide).

PACS Activated Carbon Services Inc. has been awarded a $100,000 Small Business Innovative Research Phase I Contract from the Department of Defense (DoD) to provide a new application for activated carbon.  The DoD innovation is a platform technology to provide safe manufacturing, purification, storage, shipping and delivery of toxic and/or hazardous chemicals.  The DoD Phase I contract has demonstrated the safe handling concept and its feasibility for the DoD application.  PACS now seeks independent business investors to facilitate full commercialization.  Additional technology applications are sought from the market place.  PACS expects to compete for Phase II and Phase III DoD financial funding.

Delta’s® Allora® pull-down kitchen faucet received a Silver ADEX Award in the 2008 Award for Design Excellence competition, hosted annually by The Design Journal, an international trade publication for interior designers. The pull-down kitchen faucet was selected because its unique design brings together function, convenience and style into one affordable and attractive package.

Terrapin Communications, Inc.’s Safety Turtle personal wireless immersion alarm was adopted by YMCA and other aquatic facilities, to automatically alert personnel of a water rescue by one of its lifeguards. The unit instantly detects immersion in water and transmits a signal to set off a loud alarm at one or more base stations. The device was designed to protect young children, seniors, disabled persons and pets from drowning. Terrapin appointed South-West Independent Marketing, Inc. of Santa Ana, California to represent its product in 10 western states (California, Arizona, Nevada, New Mexico, Oregon, Washington, Idaho, Montana, Utah and Hawaii). 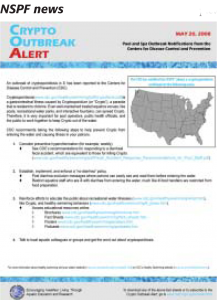 The Centers for Disease Control and Prevention (CDC) and the National Swimming Pool Foundation® (NSPF®) have established a Cryptosporidium (Crypto) Outbreak Alert System to help aquatic facilities protect their patrons from recreational water illness. Both agencies encourage other organizations to disseminate the Outbreak Alert to their contacts. Visit www.nspf.org/Cryptotoolkit.html for more information.

NSPF’s Board of Directors voted unanimously to allocate $812,500 in research grants for the year 2008-2009. The new budget matches the amount budgeted the previous year and represents an impressive 134 percent increase since year 2004. This budget includes the first $200,000 installment of a one million dollar grant to Washington State University to help establish the National Aquatics and Sports Medicine Institute (NASMI).

The Water Quality Association (WQA) is accepting nominations until August 8 for its 2009 leadership awards. Nominations are evaluated against specific award criteria; therefore, as much information as possible should be provided about the individual and the reasons they should be considered for a particular award. Winners will be announced at the Opening General Session held in conjunction with WQA Aquatech USA 2009 in Chicago (Rosemont), Ill. Visit www.wqa.org/awards for a complete list of award categories.


A high-performance water filtration media distributed by Hungerford & Terry has significantly outperformed a proprietary media previously used by a large New Jersey utility. GreensandPlus, which replaced the media at one of the utility’s three filter plants, increased efficiency and lowered operational costs of removing iron and manganese from the communi-ty’s water supply. In seven years of operation, the expensive proprietary media used at two plants is due for a second replacement. By contrast, after five years of operation, the original bed of Greensand Plus in the third plant has shown no signs of attrition and is expected to be good for many more years of operation.

The company announced that it won an order to supply low-fouling RO membrane elements for a large-scale wastewater recycling plant located in Singapore’s Changi region. The plant will have the capacity to produce 228,000 cubic meters of water per day and is expected to begin phased operations from 2009 to 2010.

Watermatic LLC entered a five-year agreement with New York City law firm Lucas and Mercanti, LLP to supply environmentally friendly water coolers and cup service. The units will be a cost-effective way for the firm to contribute to the improvement of the environment by eliminating the need to produce, transport, or dispose of thousands of plastic bottles annually.

The Reader’s Digest Foundation (RDF) will donate $100,000 to US-based WaterPartners International, an organization committed to providing safe drinking water and sanitation to people in developing countries. The unrestricted grant is the third in a series of ten $100,000 grants RDF plans to make to a variety of nonprofit organizations as part of its Make it Matter initiative. The WaterPartners grant was given in honor of New Brighton, Minnesota Highview Middle School teacher Patty Hall. During the 2006/07 school year, she and her students created H2O for Life, an organization that works to provide clean water to school children around the world.

Almost 70 percent of the UK’s water cooler industry members achieved continuing growth during 2007, despite a challenging business environment accentuated by poor summer weather, Zenith International reported. The total number of coolers installed rose 3.5 percent to 718,000 by year’s end. A three-percent decline for bottled water coolers was offset by a 21-percent growth of point of use (POU) cooler demand. Three of the top five companies experienced declines, while the other two grew in double figures, after adding in acquisitions. The top 20 firms achieved a compound annual growth rate of 17 percent between 2001 and 2004, but this fell to three percent from 2004 to 2007.

The Freedonia Group’s latest report, Water Treatment in China, indicates that demand for water treatment products will soar 15.5 percent annually through 2012. Filters and membranes will be the fastest growing segments, although all types will see double-digit gains. The report presents historical demand data for the years 1997, 2002 and 2007 and forecasts for 2012 and 2017 by product, market and geographic region. The 281-page study may be accessed through www.freedoniagroup.com or contact pr@freedoniagroup.com for more information.

Does Social Media Marketing Work in the Water Treatment Industry?