MAR Systems, LLC, was issued US Patent No. 7,341,667 in March for its Sorbster™ brand of products used to reduce arsenic in aqueous liquids, such as industrial fluid waste streams. Co-inventor Claude Kennard, MAR Systems CEO, developed the technology with the US Environmental Protection Agency (US EPA), an assignee of the patent.

U of F technology available

The University of Florida is seeking companies interested in its system for controlling chlorine concentration in water effluent from wastewater treatment plants, in order to better comply with US EPA regulations and to reduce operational costs. The technology automatically regulates the amount of time chlorinated water spends in the contact basin, effectively compensating for variability of residence (detention) time caused by inevitable daily and seasonal fluctuations associated with inlet flow rates. Contact Lenny Terry, Ph.D., at (352) 392-8929 or email lterry@ufl.edu for more information. 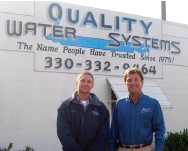 Nelsen Corporation’s new Tampa Distribution Center will open June 9 at 5701 Adamo Drive (Hwy. 60). The start-up phase is near completion, inventory arrives daily and orders will be taken and shipped the same day. Sam Mong of Quality Water of Salem, Ohio was named the winner of Nelsen’s first of three vacations to be given away during its Water. It’s Our Life! Vacation Sweepstakes. Mong and his guest will enjoy a seven-night eastern or western Caribbean cruise with luxury accommodations aboard Royal Caribbean Cruise Lines. The sweepstakes continues with a second vacation drawing to be held August 15 for a trip for two to Las Vegas, Nev. For complete rules and regulations, visit www.nelsencorp.com/2008-rules.pdf or call (800) 362-9686

US EPA’s Check Up Program for Small Systems (CUPSS) debuted last month. The user-friendly, computer-based program assists owners and operators of small water systems (SWS) in developing and using plans for system maintenance and customer service. The program and all supporting materials are available for immediate download. Visit www.epa.gov/cups and www.epa.gov/safewater/smallsystems for more information.

NSF is working with federal, state and local government agencies, water utility officials, product manufacturers and other public health experts to address consumer questions about drinking water quality. A Joint Committee that first met in March is setting up a task group to further research the status of pharmaceuticals in water. Areas of consideration include health effects, treatment options and additional requirements that may need to be established.

A joint venture between NSF and Zenith International, Ltd. is being launched to provide beverage companies (and their suppliers) with a common, worldwide scheme for carbon footprint measurement. The Carbon Action Plan (CAP) enables audited results to be combined with other environmental information in a consumer-friendly form on product labels. NSF and Zenith are working closely with Trucost Plc, an international environmental research provider recognized by Defra (the UK Government’s Department for Environment, Food and Rural Affairs).

The US Small Business Administration (SBA) named water/wastewater instrumentation manufacturer Fluid Imaging Technologies of Yarmouth, Maine as the New England Region Exporter of the Year. The company’s growth during 2007 triggered a 100-percent increase in staff, prompted a third move to a larger corporate headquarters and resulted in successful development of overseas markets for the FlowCAM® particle imaging and analysis technology.

ABB earned the 2008 Global Low Voltage Electric Drives Company of the Year Award from Frost & Sullivan for the Low Voltage Drives business segment of the company. Business development, competitive strategy, customer satisfaction and leadership within a particular Industry Research Group (IRG) were contingencies Frost & Sullivan included in its evaluation. The business unit “is perceived to exhibit outstanding management and consistent growth,” when evaluated against these measurements, the consulting firm noted.

In response to consumer demand, Nalgene®, part of Thermo Fisher Scientific, will phase out production of its Outdoor line of polycarbonate containers that include the chemical Bisphenol-A (BPA) over the next several months. The company’s existing product mix already features a number of containers made from materials that do not contain BPA.

Garlock Sealing Technologies was honored with The Rochester Business Journal’s Environmental Leadership Award. The company was one of three honorees in the environmental innovation category, based on its conversion to a more environmentally friendly material for gasket production at the firm’s Palmyra, N.Y. facility.

WQA Aquatech was good for business

Element Four, makers of the WaterMill air-to-water generator, signed eight distribution deals at WQA Aquatech in Las Vegas, indicating strong interest in both the system and the technology. Companies from various regions of the US, Canada, the Philippines, Australia, Japan and Italy signed up to be among the first to distribute the product in their water-challenged areas.

A Sacramento Bee article indicates farm well drilling has increased significantly due to continuing drought conditions and possible climate changes; drillers from coastal areas and other states are flocking to meet the demand. Fresno County permitted 204 new farms wells last year, while new wells in Madera and Tulare counties tripled between 2006 and 2007. The three counties are on pace to drill even more wells than in last year.

Research indicates that membranes used in desalination operations are the only technology that consistently removes more than 90 percent of all new contaminants found in drinking water. According to the International Desalination Association, membranes that employ nanofiltration or RO technologies effectively and consistently remove most organic compounds classified as pharmaceuticals and personal care products (PPCPs) and endocrine disruptors (EDCs). Found in water supplies and watersheds throughout the world, most traditional water treatment facilities do not routinely remove these contaminants.

Siemens Water Technologies began reorganization of its worldwide business, transitioning its 28 mainly technology-oriented business units to create four new segments aligned to specific markets and target groups. In the future, the Water Technologies business of IS will be divided among industry, municipal, chemical feed and services business segments.

Nearly 18 months before drinktec 2009 gets under way, more than 700,000 square feet (67,500 m2) of exhibition space has been booked. The proportion of international exhibitors, currently about 45 percent, is expected to increase to at least 50 percent by the show’s start on September 14, 2009 in Munich, Germany. The event will showcase the latest trends and solutions in management of the finite resources.

Waterlogic China Manufacturing earned honors as Outstanding Foreign Direct Investment (FDI) Company in the district of Ji Hont Tan, Chengyang City, Quingdao. The state-of-the-art facility produces the entire range of the company’s water purifying and dispensing systems. Criteria for the award include rapid growth, job creation and an uncompromising attitude with respect to Chinese regulations as well as social and financial responsibility.

NEWater, the high-quality reclaimed water launched in 2003 by Singapore’s national water agency (PUB), clinched the Environmental Contribution of the Year title at Global Water Awards 2008 in London recently. In 2006, PUB was named Water Agency of the Year in Dubai. NEWater triumphed over three other strong contenders in its category.