By Ken Schaeffer and Robert Potwora

Activated carbon (AC) filter media is commonly used in point of use/point of entry (POU/POE) water applications. The type of raw materials used to produce AC has a major impact upon its characteristics. The two most common are coconut shell and bituminous coal. 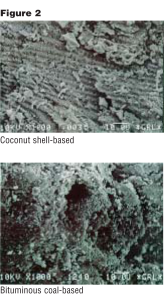 The scanning electron micrographs (SEM) shown in Figure 1 were taken at 1,000X magnification. At this magnification, the prevalence of the micropores can be seen in the coconut shell-based activated carbon. 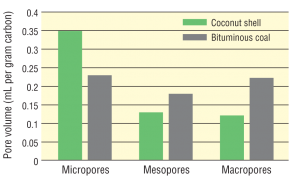 The amount of micropores present in coconut shell-based AC is about 50 percent higher than bituminous coal-based activated carbon.

Hrbons means they have much higher capacity to adsorb small molecules, such as volatile organic chemicals (VOC). Higher capacity means coconut shell-based activated carbon will last longer before it needs to be changed out.

VOC treatment
Volatile organic chemicals include most disinfection by-products (DBPs) such as trihalomethanes (THMs), and other VOC contaminants such as trichloroethylene (TCE). Many VOC’s have a low molecular weight, typically less than 200, and have low water solubility.

To measure the AC’s theoretical saturation capacity for VOC’s, carbon adsorption isotherms were conducted on coconut shell- and bituminous coal-based activated carbons. The results for benzene in water are shown in Figure 3. 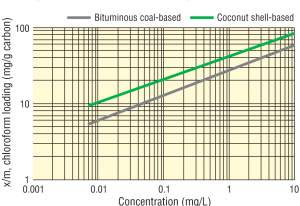 At all benzene concentrations in water, the benzene saturation capacities of the coconut shell-based AC were higher.

The carbon adsorption isotherm results for methyl tertiary-butyl ether (MTBE) in water are shown in Figure 4. At all MTBE concentrations in water, MTBE capacities of the coconut shell-based activated carbon were higher. Table 4 summarizes the results for 568 ppb MTBE in water.

The capacity advantage shown with coconut shell AC may not always be realized in actual full-scale use. Background organics like total organic carbon (TOC) will diminish the AC’s saturation capacity for a VOC to some extent. Also, low empty bed contact times (water residence time) in the AC filter will prevent the carbon’s saturation capacity to be reached.

In 2007, in response to a petition filed by domestic manufacturers, the US levied new anti-dumping duty fees on most activated carbon imported from China, to the tune of 49 – 228 percent duty (average was 62 percent) on top of the standard 4.8 percent duty for such products. In addition, China’s demand for coal has been ever increasing due to hundreds of new power plants being built. At the same time, many coalmines were closed for safety and environmental reasons, resulting in shortages and price increases for Chinese coal.

Adding to the mix of forces that combined in this perfect storm, China also eliminated the 13 percent value added tax (VAT) rebate that AC exporters previously received from their government. Finally, as the dollar has weakened, Chinese carbon prices have increased due to currency exchange rates. As China’s coal AC prices increased, the domestic manufacturers followed suit.

The icing on the China coal AC cake is the impending government-ordered shutdown of most activated carbon plants in China on May 31 for approximately three months, in an effort to reduce air pollution for the Olympics. This will certainly exacerbate the coal activated carbon supply and pricing situation. In addition, the cost of coal in China has almost tripled in the past year and for the first time ever, last year China imported more coal than it exported.

We have plenty of coal in the US; domestic activated carbon producers do not have a problem getting raw material, but they are at peak production capacity. The planned new capacity is mainly for powdered activated carbon for the looming mercury emission control market (mainly power plant flue gas) in the US. As a result of anti-dumping duties and energy and labor costs and high domestic production levels, coal AC pricing has risen rapidly in the past year.

Coconut shell activated carbon is manufactured by scores of factories in a dozen countries and imported into the US by several resellers. It is suitable for many applications and for the first time ever, it is less expensive than comparable coal-base AC. Several factors (energy, labor, currency exchange rate, etc. have contributed to bituminous AC carbon price increases; coconut shell activated carbon pricing is up also, but not nearly as high.

Conclusion
Coconut shell activated carbon is preferred to remove VOCs from drinking water in POU/POE systems because it is more economical than bituminous coal-based activated carbon. It has higher hardness, less dust, lower ash and is more environmentally friendly. The days of low-cost activated carbon are gone and one needs to make sure they are buying and using the right AC for their application. There are many types and grades of activated carbon made from various raw materials; Discuss your application with your activated carbon supplier and get the right carbon to help reduce your costs.

Ken Schaeffer has over 25 years experience in the activated carbon industry and is president of Carbon Resources, LLC. He has a BA in biology and an MS in environmental science from the University of Texas at Dallas, is an officer on ASTM D28 Committee on Activated Carbon, and is on the Pacific Water Quality Association Board of Directors. He can be reached at ken@carbonresources.com or (760) 630-5724

Robert Potwora is Technical Director with Carbon Resources, LLC and has over 25 years experience in the activated carbon industry. He is current vice-chairman on ASTM D28 Committee on Activated Carbon. He may be reached at Robert@carbonresources.com or (760) 630-5724.