Surface Modification of Activated Carbon for the Removal of Water Impurities

By Vivekanand Gaur and P. A. Shankar

Introduction
Activated Carbon (AC) is a family of microporous materials used in a myriad of commercial applications as adsorbents for the removal of gaseous and liquid pollutants as well as many other applications. Activated carbon is the generic term used to describe a family of carbonaceous adsorbents with a highly amorphous structure and an extensively developed internal pore structure. AC is produced from a variety of carbonaceous rich materials such as wood, coal, lignin and coconut shell. The adsorption phenomenon of AC results from its large microporous surface area. This large surface area relative to the size of the actual carbon particle makes it easy to remove large amounts of impurities in a relatively small enclosed space.

The adsorptive structure in AC is comprised of ordered carbon atoms of aromatic planes. These graphitic planes form crystallites; i.e., the turbostratic layer stacks, similar to graphite. However, the angular orientations of the planes in the ACs are random to each other, whereas in the graphite they are well ordered. AC is invariably associated with appreciable amounts of heteroatoms such as oxygen, hydrogen, sulfur and nitrogen, that exist in the form of functional groups and/or atoms chemically bonded to the structure. In the carbon matrix, oxygen is the predominant heteroatom present in the form of functional groups, including carboxyl, carbonyl, phenols, lactones, quinones and others. The unique adsorption properties of AC can be significantly influenced by these functional groups. The surface oxygen complexes of AC are mainly created by two major oxidation methods, namely dry and wet. The former is a method involving reactions with oxidizing gases (steam, CO2, air, etc.) at high temperatures (> 600°C), while wet oxidation involves reactions between AC surfaces and oxidizing solutions such as aqueous nitric, sulfuric and ortho-phosphoric acids and hydrogen peroxide at low/reflux temperatures (~100°C).

Different starting base materials and the activation process result in unique pore size and pore distribution. Based on pore size in terms of pore diameter, AC is commonly described as macroporous (above 50 nanometers [nm] in diameter); mesoporous (two to 50 nm diameter) and microporous (under two nm diameter).  The most commonly used activated carbon in water purification is prepared from bituminous and anthracite coal and coconut shell-based raw materials. Coconut shell and wood-based raw materials used in activation are referred to as renewable resources. Coconut plantations with millions of acres of land continue to provide all the benefits of green trees to the environment by removing carbon dioxide, in spite of using billions of coconut shells per year. Coconut shellbased activated carbons are the least dusty, predominantly microporous and are well-suited for organic chemical adsorption. Coconut shell-based carbon has the highest hardness compared to other types of activated carbons, which makes it the ideal carbon for water purification.

Water impurities and their removal techniques
The major toxic impurities present in water are inorganics, heavy metals (such as arsenic, lead and mercury), ionics (such as fluoride and cyanide), organic (such as phenol and trichloroethylene) and microbial contaminants. The major techniques applied for water purification include adsorption, ion exchange, reverse osmosis (RO) and intensive processes like chlorination and ozonation. Adsorption is one of the most effective and economic techniques. AC has been proven to be an effective adsorbent for the removal of a wide variety of contaminants from drinking water. As such AC has remarkable affinity toward organic and inorganic contaminants in water; but to further enhance its adsorption capacity and make it more competitive toward specific impurities like metal species, it is necessarily required to modify the surface of AC. In general, the presence of acidic functional groups on AC enhances their metal adsorptive capacities but these functional groups are unfavorable for the adsorption of organics like phenolic compounds. Prior to the modification of AC, it is further necessary to understand the important factors that influence its performance. These factors include specific surface area, pore volume, pore-size distribution and the nature of AC surface. The surface modifications result in the change in the surface reactivity, chemical, physical and structural properties. Although the effectiveness of ACs as an adsorbent for a wide range of pollutants is well known, more and more research on its modification is gaining prominence due to the need to develop enhanced affinity for specific contaminants and remove them from industrial and drinking water applications.

Types of AC surface modification techniques
Based on the type and nature of the targeted impurities, the surface of AC may be modified to enhance the affinity toward the desired impurity. As an inert porous carrier material having large specific surface area, AC is capable of attracting a variety of chemicals onto its hydrophobic internal surface. Depending on the application, there are different methods to modify AC, which make the surface accessible to a variety of reactants. In general, the surface modification of AC is carried out after the activation step. 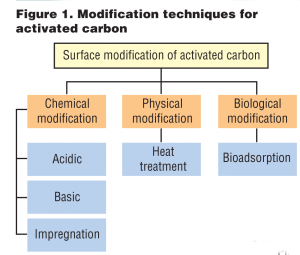 Chemical modification
It is well known that depending on the presence of the surface functional groups, the AC surface can show acidic, basic or neutral behavior. For the removal of heavy metals from water, acidic functional groups (i.e., oxygen functional groups containing proton donors) on carbon surfaces have been examined and found to be highly favorable because metal ions have a tendency to form metal complexes with the negatively charged acid groups. The major acidic groups present on AC surface are shown in 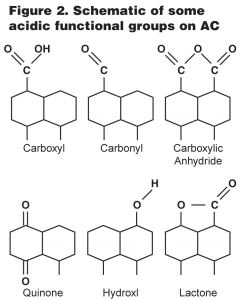 . All of the chemical treatments using oxidizing agents employed for creating acidic functional groups are associated with the reduction of specific surface area and total pore volume, mainly due to the destruction of porous structures within AC during oxidation. This is, therefore, a subject of research into alternative methods to increase the acidic surface groups without considerable pore destruction. The chemical modifications of basic groups on the surface are carried out by treating AC with chemicals such as aqueous ammonia and sodium hydroxide. Under alkaline (basic) solutions, it is expected that OH– ions react with the surface functional groups of AC. The alkaline treatment of AC is beneficial in enhancing the adsorption of especially organic species (like phenol) from water.

Surface impregnation is one of the most important chemical modifications. The term impregnation is defined as the fine distribution of chemicals and metal particles in the pores of AC. The following three reasons are suggested for the impregnation of activated carbon.

Recently, the impregnation of AC with metals such as siver, copper, nickel, aluminum and iron has attracted great research interest because of their significantly high sorption capacity for molecules the host AC cannot attract without the impregnant. AC impregnated with such transition metals has shown enhanced adsorption capacity and/or reactivity towards fluoride, cyanide and heavy metals like arsenic in water.

Plasma treatment
Plasma oxidation is a process wherein granular activated carbon (GAC) is exposed to plasma under vacuum or atmospheric pressure in the presence of controlled air or oxygen. During this  process, very little textural change takes place; however, there would be a substantial change in the surface chemistry of GAC. During plasma oxidation, there would be an increase in the surface acidity due to chemical addition of oxygen to carbon surfaces as oxygen free radicals react aggressively with carbon atoms located at the peripheral surface of the graphitic platelets. In the future, plasmatreated carbons could be a source of specialty carbons to remove specific contaminants/pollutants present in air or water. Research should focus on ways and means of exploiting the potential of plasma treatment for removing targeted chemicals/metals/microbes. The plasma treatment process requires a one-time investment for equipment and  instrumentation and recurring expenses for the electricity required to generate plasma. The process, therefore, would not be prohibitively expensive, especially when large volumes of activated carbon are treated. The process would also provide carbon with flexibility to remove a variety of pollutants/chemicals without generating any effluents and without decreasing the efficiency and performance of carbon.

Biological modification
The presence of microorganisms in water is a worldwide concern. For the last several decades, growing attention has been given toward the adsorption of these organisms on AC due to:

In the GAC chamber or in a carbon block used in water filtration, large-size bacteria get trapped within the activated carbon. These trapped bacteria begin to multiply in the activated carbon chamber, an ideal environment of temperature and organic nutrients for growth. This bio-fouling may cause GAC or carbon blocks to emit a decaying odor if the carbon media is not replaced regularly. New bacteriostatic technologies for activated carbon would be helpful to increase the life of carbon media, control heterotrophic plate count (HPC) growth and prevent malodors. NSF Standard 42 has a test designed for the biostatic properties of the carbon chamber to test claims that the filter will not allow bacterial growth. The standard requires that water leaving the filter must have no more than 20 percent more bacteria than water entering the filter, over a long testing period containing native heterotrophic bacteria and some organic compounds. (HPC bacteria are not of any health significance as determined by a panel of expert microbiologists during the 2002 NSF-WHO Symposium on HPC Bacteria in Drinking Water.) The standard requires that, ”The geometric mean of the heterotrophic plate counts of the product water samples from each system shall be no greater than that of the influent challenge samples, within a measurement precision of +/- 20 percent” over a six to 13 week test period, depending on the system’s capacity. The test water is dechlorinated tap water containing native HPC, 200-600 ppm TDS and TOC >/= two ppm.

Summary and future scope
This article briefly describes the main features of AC along with a wide spectrum of its surface modification techniques for water purification. Furthermore, the advantages and disadvantages of these techniques are discussed in the concern of removing different types of water impurities. Chemical modifications, especially the acidic treatment, are the most widely used techniques, perhaps because of the simplicity and availability of the desired aqueous solutions. The oxidative treatments have been shown to be more favorable for the removal of heavy metals from water, whereas the thermal treatment is generally more favorable for removing organic contaminants from water. It is thus evident that selection of certain modification techniques on AC should be targeted at the type of contaminant species in water. The chemical treatments to develop the surface functionalities may, on the downside, adversely affect the physical properties of AC or vice versa. This opens new directions for modifications to simultaneously develop chemical as well as physical characteristics of AC.