Estimating the activated carbon life cycle is a crucial part of designing an effective carbon filtration program. The first evaluation is based on conducting a series of calculations on the contaminant loading and effect on carbon life using Freudlich’s isotherms. Once the carbon is installed, however, the length of carbon life could be a whole different story. Therefore, it is important to put the right system in place (which offers longevity, capacity and mechanical efficiency) and just as important to know ahead of time when breakthrough might occur. When this is done preemptively, operators do not have to worry about exceeding capacity and possibly allowing breakthrough compounds to contaminate downstream supplies, which could result in fines, irreparable damage or additional clean-up costs.

Carbon performance will depend on a number of factors such as the type of carbon used, particle size, activity level, contaminant concentrations, pH (liquid phase applications), operating temperature (and humidity in vapor phase applications), flow rates, online time of operation and the minimum allowed breakthrough requirements. Once the system is designed and installed, the next step is to compare the theoretical model against the actual performance. This is done by using the following procedure.

Establish the carbon’s unused activity
One of the most important aspects in determining how well the carbon is performing is to get a base analysis of the unused carbon. Believe it or not, this step is often skipped and a true comparison cannot be made. When evaluating a carbon’s true level of activity, several test methods can be used. Therefore, it is very important to recognize what these tests really mean, as well as utilizing the right test for proper evaluation. Industry standards for how active or good a carbon might be range from the iodine number to the phenol number. CTC, butane and iodine numbers are the most widely recognized values for measuring and comparing carbons here in the US, while additional tests are recognized internationally. A list of the various tests and what they measure are listed in the Tests Table. (Editors note: For both liquid and vapor phase activated carbon(s), the Freundlich Adsorption Isotherm is a plotted curve based on the mathematical equation x/m = Kp1/n, relating to the concentration of a specific compound and the ability of a specific type of carbon being able to physically adsorb that compound at different concentrations and/or temperatures. Where x = mass of adsorbate; m = mass of adsorbent; p = equilibrium pressure of adsorbate; c = equilibrium concentration of adsorbate in solution. K and 1/n are constants for a given adsorbate and adsorbent at a particular temperature.) 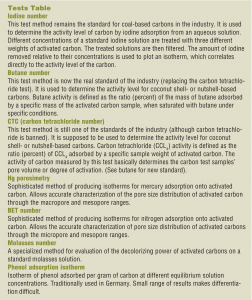 For this discussion, the iodine number and/or CTC (butane number) will be used. But, it is always important to understand the application and which test will provide the best result for analysis.

Butane and/or carbon tetrachloride activity (CTC) are values used to describe the activity level of coconut shell carbons (predominately microporous, see chart). Because CTC is a relatively small molecule, it is more readily adsorbed into the smaller micropores of a carbon matrix. Therefore, when someone talks about a CTC or butane number, what they might not know is that they are describing adsorption capacity based on a type of carbon’s ability to adsorb contaminants based on pore size and relative contaminant molecule size. CTC is the ratio (percentage) of CCL4 adsorbed by a specific sample weight of carbon and usually ranges from 45 up to 80. Because of regulations banning the use of CTC, the activity level for these types of carbons are now tested using the Butane Activity Test (ASTM D5742-95). The carbon industry is beginning to regularly use the butane number, but by using a multiplication factor of 2.55, referenced in the ASTM Test Method, the butane number can be easily converted to a representative CTC number.

Example: Unused coconut carbon is tested in accordance with ASTM D-5742-95 and has a butane number of 23.54. As outlined in the test method, multiplying this butane number by 2.55 gives a number of 60 CTC. For evaluation purposes, this number corresponds to a level of 100 percent-unused activity for the carbon tested!

For carbons used in liquid phase applications, such as wood or bituminous coals (predominately mesoporous and macroporous [transitional]—see chart), the unused activity is typically represented as an iodine number. An iodine number is established with the test method ASTM D4607-94. This test determines the level of iodine adsorbed onto the activated carbon from an aqueous solution. The reason iodine is used is because of its larger molecular size, relative to the larger pore diameters of a bituminous and/or wood based product. Different concentrations of a standard iodine solution are treated with three different weights of activated carbon. The treated solution is then filtered and the amount of iodine adsorbed, relative to their concentrations, is used to plot an isotherm, which correlates directly to the activity level of the carbon. When using this test method, no conversion is necessary since the iodine number is an accepted industry standard. Typically, unused iodine numbers range from 600 to 1,150. This number too, corresponds to a level of 100 percent-unused activity for carbon tested!

While both tests are acceptable measures for establishing an unused activity level, the right test for the right type of carbon should be used. And, it is actually rather difficult to compare butane numbers (CTC) to iodine numbers because of the difference in what each test is measuring (i.e., pore size, relative to volume).

Formulate a schedule for testing the carbons remaining life
In the initial design, an estimate of carbon life is predicted. But many times, unknown factors (such as fluctuations in concentrations) can alter how long the carbon will actually last. This is why a regiment of remaining life tests should be conducted over several change-out cycles, comparing real-time results against past results and the original model. In addition to evaluating when the carbon should be replaced, the history will help operators utilize as much of the carbon as possible before replacement.

Collecting samples
With a schedule outlining when samples should be tested, samples are collected and actual testing is conducted. Samples are not just randomly scooped up from the top of the adsorber bed. There are proper procedures, which need to be followed as outlined in ASTM E 300 Practice for Sampling Industrial Chemicals.

Once the samples are collected, remaining life tests are conducted using method ASTM D-5832-95. This test actually measures the percentage in weight of volatile matter adsorbed onto the inservice carbon. The capacity of carbon for individual compounds is estimated relative to its initial unused weight and density. This is a simple test, which measures an increase in weight from the pre-tested unused sample compared to the in-service volatile loaded sample.

Typically, carbon adsorption capacities for liquid phase carbons will range between five and 30 percent by weight and are based on the targeted individual and/or groups of compounds. But, because of a varying range in compound characteristics, it is never a good idea to forecast a typical adsorption capacity until a solid history has been established for each individual application.

The easiest method for establishing performance and evaluating the remaining life of carbon is to use the same original virgin capacity test Butane Activity Test, ASTM D5742-95 or Iodine Number Test, ASTM D-5742-95. Remember that these tests establish the carbons 100-percent virgin capacity. In general, when an in service carbon sample is tested again and shows a value of approximately 210-30 percent lower than the original virgin number, the carrgon would be considered spent. This is a general rule of thumb, but in many instances is the most practical approach.

Example: When a coconut shell carbon, which is in service, had an original butane value of 23.54 (60 CTC) and after being in service has a measured a butane number between 3.92 (10 CTC) and 5.88 (15 CTC), the carbon is considered used and should be replaced.

Again, these values are based on a general application and should be compared against historical data. Finally, testing patterns should be repeated after several carbon replacements, in order to confirm minimum carbon life cycles. After the repeated carbon life cycles are confirmed, testing requirements can be minimized to coincide with preempted breakthrough.

Conclusion
Evaluating carbon life can easily be accomplished, when following a basic set of guidelines. The first step is to establish an application model, which includes, but is not limited to, identifying target compounds along with inlet concentrations and allowable outlet concentrations. The second step is based on establishing what type of carbon is best suited for the application and estimating a benchmark unused life analysis. The third step is implementation of a carbon testing regiment within the working model. The last step involves evaluating the carbon remaining life test data over multiple carbon replacements in order to establish a trend for minimum operating life cycles.

About the author
William H. Brumfield is President of Carbon Link Corporation and has been in the activated carbon and filtration business for over 20 years. The company, located in Mount Vernon, Ohio, just 60 miles northeast of Columbus, focuses mainly on the sale, development and processing of unique, high-grade activated carbons, filtration media and equipment used for filtration in liquid and vapor phase applications. Brumfield and his staff can be reached toll-free at (800) 858-6889 or by e-mail at [email protected].