A Warning for Contact Lens Wearers: Waterborne Amoeba Can Cause Blindness

Free-living amoebae are common to soil and water environments and important in the cycling of organic matter in the ecosystem, as they graze on the ample supply of bacteria and fungi. Some amoeba are known to cause rare but serious illnesses in humans. Seasonal and climatic changes lead to the proliferation of amoeba in water and increase the exposure potential of humans with these primarily opportunistic pathogens (i.e., causing infections in immuno-compromised persons). Increases in cases of amoeba-related eye infections have prompted investigations of a common exposure source. Tap water continues to be suspect.

Environmental reservoirs
Amoebae have complicated life cycles and may exist as hardy cysts in the environment. Like other protozoa, Acanthamoeba are known to internalize and harbor other human pathogens, including Methicillin-resistant Staphylococcus aureus (MRSA) and Legionella.1 Bacterial pathogens may have a symbiotic relationship with the amoeba, where they live together and are protected from environmental elements of destruction, such as chlorine disinfection of the water supply. Furthermore, researchers have shown that bacterial pathogens grown in amoebae are more virulent than those grown independently in the laboratory.

Infections associated with Acanthamoeba primarily occur in persons with compromised immune systems. The organism typically affects the brain and spinal cord and may disseminate to other organs, including the skin, sinuses, lungs, etc. Eye infections, however, can occur in otherwise healthy individuals and progress to a condition of permanently impaired vision or even blindness. The amoeba has been isolated from treated swimming pools, hot tubs, cooling systems (HVAC systems), tap water and natural waters. Originally listed on the 1998 US Environmental Protection Agency’s (US EPA’s) Contaminant Candidate List (CCL 1) of unregulated contaminants which may require a national drinking water regulation in the future, Acanthamoeba was removed prior to CCL 2 (2005) after determining that the risk from tap water exposure was below US EPA’s goal of 1:10,000 infections per year for surface water supplies.

Able to invade the cornea of the eye, about 85 percent of Acanthamoeba infections in the US are associated with contact lens wearers. While all contacts are subject to contamination, the highest risk is with soft contacts. Currently, about 30 million Americans wear soft contacts. The amoeba is thought to survive between the lens and the eye. Inadequate disinfection of the lenses prior to insertion or contamination during swimming are primary exposure routes. The use of homemade solutions, tap water rinses and other improper handling techniques are high-risk behaviors; however, infections have also been documented in wearers who followed recommended contact disinfection procedures. Increasing illness The use of confocal microscopy, combined with epithelial biopsy (isolation of corneal cells) has aided in the clinical diagnosis of amoeba-related keratitis; but improved methods in diagnostics and reporting alone, do not account for the recent increase in Acanthamoeba cases. In January 2007, the US Centers for Disease Control and Prevention (CDC) published the results of a retrospective survey of 22 ophthalmology centers aimed at determining if the incidence of Acanthamoeba keratitis was increasing in the nation. By March, the results were in from 13 centers, indicating a confirmed increase over a wide geographical area since 2004 to the present date. Two months later, the CDC began a multi-state investigation to identify specific risk factors associated with the Acanthamoeba epidemic.

According to the CDC, the incidence of Acanthamoeba keratitis in the US from 1985-1987 was one to two cases per million contact lens wearers (or approximately 10-20 cases per year.2) Such a low incidence rate contributes to the difficulty in documenting an increase in infections unless a focused study is conducted. As of May 2007, the incident rate reported in 35 states and Puerto Rico increased to an average of 57 cases per year. Forty-six confirmed cases were extensively interviewed revealing a median age of 40 years old (range 15-77 years). Medical therapy was unsuccessful in 24 percent of the patients meaning that a corneal transplant would be required to restore their vision. Ninety-one percent of the patients wore contact lenses and 38 percent and 83 percent reported swimming or showering while wearing their lenses, respectively—both recognized as high-risk behaviors for Acanthamoeba keratitis. The majority of the patients interviewed, however, reported using a particular lens solution, Advanced Medical Optics Complete MoisturePlus multipurpose cleaning solution (Santa Ana, Calif.), prompting a CDC and US Food and Drug Administration (FDA) public notification effort and a voluntary recall by the manufacturer. Given that the relative risk contributions of products and behaviors have not been fully established, the CDC, FDA and US EPA provide specific guidelines for avoiding Acanthamoeba eye infections from a variety of potential sources (See break-out box). 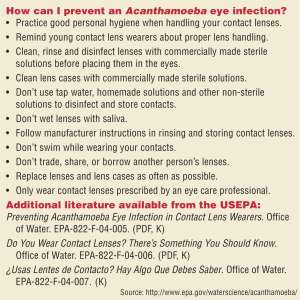 Tap water suspected
In the United Kingdom (UK), Acanthamoeba keratitis rates are typically 15 times that of the US; contaminated tap water supplies are a suspected risk factor. Recently, tap water outlets in the homes of 27 patients with confirmed cases Acanthamoeba keratitis in the UK were monitored.3 Acanthamoeba was isolated from eight (30 percent) of the homes’ taps. All homes had water storage tanks on their rooftops that presumably contribute to the colonization of amoebae in the water supplying the household taps. A similar survey in Korea identified domestic tap water as a source of Acanthamoeba contamination of contact lens storage cases with nearly eight percent (16/207) of domestic tap water samples testing positive for the organism.4

Earlier this year, a survey of tap water samples in several counties in Florida found Acanthamoeba in 2.8 percent of the samples (8/283).5 Other free-living amoebae were found in 19.4 percent of the samples. The authors suggest that the high rate of amoebae in domestic  tap water from a treated, municipal source is indicative of ineffective treatment against their various environmental stages; however, the potential for contamination in the distribution system, or in the home, cannot be discounted.

Preventing domestic exposures
Studies have shown a positive correlation between increased counts of Acanthamoeba in surface water and amoebic keratitis rates in humans.6 Amoebae are generally resistant to levels of chlorine, monochloramine and ultraviolet light typical of municipal water treatment plants. They are larger than Cryptosporidium (15-35 microns versus 4-6 microns) and thus, are expected to be removed from surface waters via filtration required under the US EPA’s Surface Water Treatment Rule. Post-treatment contamination or untreated water sources are a particular concern, which can lead to the proliferation of amoebae during distribution and following household storage. Point-of-use water treatment systems rated for removal of Cryptosporidium (< 1 micron absolute filters, reverse osmosis membranes or products certified under NSF Standard 53 for cyst removal) are also expected to be effective for removal of Acanthamoeba and other free-living amoebae. Additional POE treatment may be further warranted, given the potential for exposure in shower taps.