The mercury vapor arc lamp was invented in 1901 by Peter Hewitt Cooper of New York. The arc emitted a characteristic blue light, but it was discovered that 99 percent of the radiant energy lay in the deep ultraviolet (UV) spectral region at two strong wavelengths: 254 nanometers (nm) and 185 nm, the ozone producing line- see Figure 1 (note that the ozone producing line is omitted). Ever since the initial discovery, increasing interest in the utilization of the UV radiation for scientific and germicidal uses resulted in the myriad of lamp types now available.

Low pressure lamps
Just how low is the mercury vapor pressure? The answer is very low indeed, since the lamps operate at peak efficiency at a mercury vapor pressure of six millitorr or eight millionths of atmospheric pressure! The actual pressure inside the lamp is due to a rare gas fill of approximately three torr, (editor’s note: torr is a measurement of pressure. One millimeter of mercury on a barometer is equal to one torr. Standard pressure is equal to 760 torr) some 500 times the mercury vapor pressure! But it is the mercury pressure that is the critical factor in lamp design. Low pressure lamps always have liquid mercury inside; during operation, the mercury will tend to collect in a single spot at the back of the lamp behind the electrode; it is the temperature of this cold spot that determines the lamp efficiency. The equilibrium vapor pressure of mercury is an exponential function of the cold spot temperature – i.e., the pressure is very sensitive to temperature changes. As noted above, the peak efficiency is attained at six millitorr pressure, which corresponds to a cold spot temperature of 40°C or 104°F. It is the central task of lamp and equipment designers to achieve a cold spot temperature as near to 40°C as possible over the entire range of operation.

Standard type
Standard types are the conventional 420 milliamp, T5 lamps with an argon fill gas. To illustrate the design parameters involved, we will use one of the most common lamp sizes – the G64T5 which has the following specs:

This lamp has long been the workhorse of the industry due to its high efficiency. In general, a longer lamp is more efficient than an equivalent short lamp since there are constant end/electrode power losses in every lamp and the percentage loss is less for longer lamps.

If someone tried to get more output by raising the current, he would find that, despite the increased power consumed, he would get hardly any increase in output! The reason for this is that the increased power will raise the cold spot temperature, which will increase the mercury vapor pressure and cause more absorption of the 254 nm photons as they try to get out of the lamp. Simply stated, the lamp becomes less efficient. Interestingly, the 185 nm line is relatively unaffected by this. If the pressure becomes very high, e.g., medium pressure, no 254 nm radiation will get out – the line is reversed (totally self-absorbed with side bands due to pressure broadening) as seen in Figure 2. To address this problem, a series of higher output (HO) lamps were developed that were physically interchangeable with the standard lamps.

High Output (HO) type
HO type lamps operate on ballasts (transformers) that are designed to run the lamps at 800 milliamps, or nearly twice the current of the standard lamps. The specs for the GHO64T5 lamp are as follows:

Note that the arc length of the HO lamp is shorter than that of the standard lamp. This is due to the fact the electrodes, which are the main source of heat supplied to the cold spot, extend farther into the lamp helping to maintain the ideal cold spot temperature. In order to get more power into the lamp, in addition to increasing the current, the voltage is increased by adding neon to the argon fill gas.Since neon is a lighter gas with a greater heat conductivity {hence heat loss} than argon and,,since the arc length is shorter, the HO lamp, despite the 35 percent increase in output , has a 25 percent decrease in efficiency. In many applications, the loss in efficiency is compensated by the higher output. 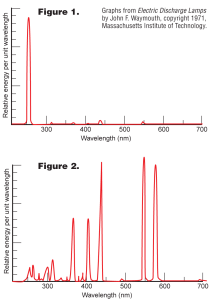 Amalgam type
In recent years, the vexing problems of thermal sensitivity and limitations on increased power have been largely overcome by the introduction of amalgam lamps. An amalgam is a metal alloy that contains mercury as one of the component elements. In their application, the amalgams do not have a well-defined melting temperature; rather, as they approach the melting point, there is a partial melting of one composition and a solid of a different composition resulting in two co-existing phases – one solid and one liquid. Because of phase rules, mercury can only vaporize from the liquid phase, which puts a natural brake on the mercury vapor pressure rise with temperature. The mercury vapor pressure is almost totally independent of temperature over the entire range from the onset of melting (solidus) to complete melting (liquidus). For the case of the commonly used indium/mercury amalgam, the mercury vapor pressure is within 95 percent of ideal ( six millitorr) over a range in temperature from 75 to 110°C (167 to 230°F). This permits (and in fact, requires) operation in this temperature range. The specs for a G64T5 amalgam lamp are as follows:

The lower efficiency as compared to the standard G64-type low pressure lamp is due to the higher operating temperatures and attendant radiative losses. The amalgam lamps would seem an ideal source but they are expensive and require higher cost ballasts.

The medium pressure lamp is finding use in very large clean water applications where the capital costs of using some ten times as many lamps, ballasts and fixtures would be prohibitive. One can imagine a mayor or governor opting for the lower initial cost of medium pressure for a municipal drinking water system and letting his successor worry about the electric bills!!

Another advantage of medium pressure is that its longwave ultraviolet radiation from 300 – 400 nm finds uses in photolysis applications for the destruction of organic chemical compounds. It is true that the 185 nm radiation at 6.7 electron volts will destroy almost anything…but it’s a question of bond strength and for this, the ~365 nm (3.4 eV) radiation of medium pressure is very effective for many photochemical applications, including the major one of photopolymerization. (These lamps play a major role in the destruction of chloramines in treating swimming pool water, for example).

About the author
Steven E. Tillotson is Lamp Application Engineer for Atlantic Ultraviolet. He has worked at the corporation for over 30 years and has held various positions during his tenure there. Tillotson is well-versed in production and application of germicidal UV lamps. He can be reached via telephone 631 273-0500 or email, stillotson@atlanticuv.com.

About the company
Since 1963 Atlantic Ultraviolet Corporation has engineered and manufactured ultraviolet water purification equipment, ultraviolet air sanitizing and surface disinfection systems, and uv germicidal lamps for residential and commercial applications. Throughout the years ultraviolet technology has become well established as a method of choice for its effectiveness, economy, safety, speed, ease of use, and because the process is free of by-products. For more information, contact Atlantic Ultraviolet Corporation , 375 Marcus Boulevard, Hauppauge, NY 11788, USA, telephone 631 273 0500; faz 631 273 0771; website www.ultraviolet.com.