Chloroform as a Surrogate for Volatile Organic Contaminants

Indirect measurements and indicators are commonly used to help us calculate and calibrate things that are difficult or costly to accurately assess otherwise. Examples are endless – we want to measure total dissolved solids (TDS), but we find that measuring electrical conductivity is much simpler to do and gives a great indication of dissolved solids concentration. We want to measure the volume of water treated by a product, but instead of directly capturing and quantifying this volume, using a carefully and accurately calibrated totalizing flow meter is a much more workable solution.

In these cases, scientific principles were used to suggest a method of indirect measurement; then validation testing was conducted to verify that the indirect measurements and indicators were valid approaches to obtaining the actual information desired.

This same approach can sometimes be taken when developing contaminant reduction claims for water treatment technologies. Let’s take a look at what is probably the best known example of this, the chloroform VOC reduction surrogate under NSF/ANSI 53. 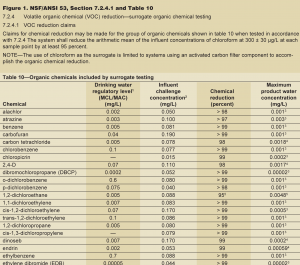 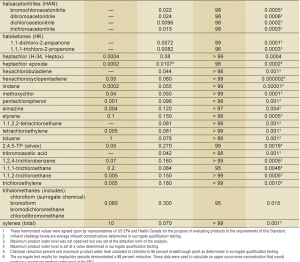 Scientific principles
The NSF/ANSI DWTU standards are based on sound science. Principles of sound science are important when developing test methods and requirements to ensure that the standard is rigorous and addresses both the technologies themselves and their real world applications appropriately. These principles were considered when establishing the chloroform VOC surrogate. The considerations included the following:

Laboratory confirmation
Once the concepts of the chloroform surrogate test and claims were developed, specific claims were validated through laboratory testing. A number of laboratories, including NSF’s, tested several different configurations of activated carbon products to measure breakthrough of contaminants. These product configurations included carbon block, granular activated carbon and pre-coats. The testing was conducted side-by-side to determine relative breakthrough of various compounds compared to chloroform. This resulted in a very extensive study that generated massive amounts of data that took several years to complete.

Findings
Chloroform was found to be a valid indicator or surrogate for breakthrough of a number of organic compounds. These compounds were compiled into a list, with their relative breakthrough indicated. This list became a table of surrogate claims in NSF/ANSI 53, which in the current version of NSF/ANSI 53 is Table 10. Please see Figure 1 for a description of the requirement for the chloroform surrogate test and a copy of Table 10.

Interestingly, a number of contaminants did not demonstrate a surrogate relationship with chloroform as expected; there have been various reasons hypothesized as to why the expected surrogate relationship did not apply. For example, polychlorinated biphenyls (PCBs) broke through the carbon at seemingly random intervals, not necessarily later than chloroform. For this reason, PCBs are not included in Table 10. They have much higher molecular weights than chloroform and much lower solubility, so it was a mystery why the surrogate relationship did not hold true. However, their solubility in water is so low that they may tend to adhere to any tiny particles present in the test water and actually move through the filter attached to these particles, instead of being adsorbed by the carbon. This type of finding demonstrates the importance of the validation of theory through actual laboratory testing whenever possible, as including PCBs in Table 10 based on theoretical considerations would not have been valid.

Other applications for surrogates
The surrogate claim concept is beneficial for everyone. For manufacturers, it means the possibility to establish product performance for a number of compounds with one test. That means lower costs for dealers and consumers alike. This leads to considerations for other situations where use of surrogates may be considered.

One of these situations is with microbiological claims. These are claims of disinfection of virus, bacteria and cysts that may be present in water supplies. It would be impossible to test a product for performance in disinfecting every virus and bacteria that could contaminate a water supply – there are too many of them and some of them are not amenable to laboratory testing for a variety of reasons. So the surrogate concept comes in to play. Much like with chloroform, scientific principles must be considered when establishing surrogate relationships. For example, when considering mechanical filtration technologies, it would make sense to test using the smallest virus, bacteria and cyst organisms possible. Other considerations are safety for laboratory personnel, commercial availability of the organisms and the availability of accurate enumeration techniques.

A second situation where surrogates are valuable is with radioactive heavy metals. Laboratory testing product performance in treating radium and other heavy metals can be very difficult logistically and could pose health risks. For these reasons, testing with other metals or surrogates is an excellent approach for establishing claims.

Indirect measurements – a valuable tool
The VOC chloroform reduction surrogate under NSF/ANSI 53 is an excellent use of an indirect or indicator measure. There are many reasons why direct measurements are not always the best approach – technical difficulties, costs, accuracy and other reasons can contribute to approaches using indirect measurements. We’re all familiar with a large number of these situations, not only in the water treatment industry, but in all aspects of life. These indirect measurements are another tool available to the NSF Joint Committee on Drinking Water Treatment units. The Committee uses this tool and many others to best possible effect as they build the most comprehensive set of standards for POE and POU products anywhere in the world.