By Kelvin Inn and Noel Tai

The world’s second-largest economy (measured in terms of purchasing power parity) is a thirsty one. Its demand for clean water is projected to rise to 585 billion cubic meters per day by 2010. That is equivalent of 1,000 times the volume of water approaching Niagara Falls’ during peak flow season each day.

Among the BRIC (Brazil, Russia, India, China) developing countries, India’s and China’s water resources are very much below what will be needed to adequately support their populations.

In a report by the United Nations (UN) in 2005, China’s total actual renewable water resources (TARWR) was estimated to be 2,140 m3 (just above the UN defined water stress benchmark of 1,700 m3). In some arid parts of northern China, annual water availability per capita drops to only 350-750 m3. 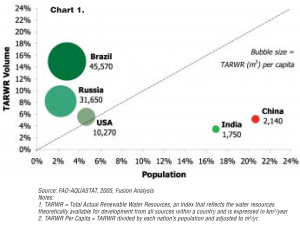 A murky water scenario
Since the 2005 United Nations TAWR report, several factors have added to the severity of the situation.

In 2007, China suffered its worst drought in 10 years. For example, the water level in the Potang Lake in Jiangxi, China’s largest freshwater lake, was near its lowest level in history due to the lack of rainfall. The effects of the drought will continue to ripple through the hydrographical system.

Aside from the forces of nature, there are the forces wrought by the booming economy and creaky infrastructure. According to the Association for Sustainable and Responsible Investment in Asia, it is estimated that as much as 70 percent of industrial wastewater and 20 percent of residential wastewater is discharged daily without any prior treatment. This is bad news for China’s natural rivers, lakes and groundwater.

The Institute of Public and Environmental Affairs says that 59 percent of China’s seven major river regions today are graded as Class IV, Class V or worse; meaning that 59 percent of the water found in these regions is unfit for drinking or even industrial use. The benzene spill in northeastern China in November 2005, for example, poisoned the Songhua River, affecting the water supply of millions of people in China and in neighboring Russia. 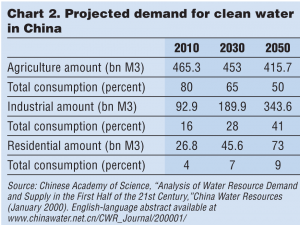 Almost 75 percent of China’s lakes are significantly polluted, with 18 out of 24 primary lakes rated worse than a Type III water body; meaning that they cannot be considered as drinking water sources and there is no general protection for fish or swimming areas.

In terms of natural groundwater, 37 percent is unfit for drinking without treatment.

With about 61 percent of China’s economy reliant on industry (49 percent) and agriculture (12 percent), the future looks bleak without urgent clean water treatment.

The business of cleaning up
As early as 2005, China’s Ministry of Water Resources estimated that 400 of China’s 660 cities already have insufficient water supply and 100 of these face extreme water shortages. Demand for clean water will only continue to grow.

Recognizing the risks to food, economic and social stability and security, China is looking at improving its infrastructure and upgrading its municipal treatment facilities in order to provide sufficient clean water. The government plans to invest US$55-60 billion to control water pollution in 11 rivers and lake areas in the next five to ten years, plus approximately US$22 billion on water supply and wastewater treatment facilities by 2013.

This is good news for Chinese water treatment firms such as China Everbright, China Water Affairs Group, Guangdong Investment, Beijing Capital Company and Tianjin Capital Environmental Protection Company, as well as foreign firms such as Véolia Water, Suez and Berlin Water, as they collaborate with municipalities in building or upgrading water treatment facilities. Smaller foreign water specialists like Hyflux, IDE and Bio-treat Technology also see ample opportunity in the China market and are already offering their water/wastewater treatment services and technologies to both municipalities and industrial parks.

Conclusion
Growing water scarcity and greater willingness by China’s central and local governments to utilize market-based mechanisms to resolve the problem is likely to lead to more opportunities for private water companies with compelling value propositions. Demand-based solutions that better manage demand and improve resource efficiency such as recycling and reclamation technologies or multi-tier pricing, will be in vogue. Supply based solutions, such as desalinization (salt-to-fresh-water conversion) or reallocation schemes (south-to-north water diversion) will continue apace.

About the authors
Messrs. Inn and Tai are the authors of a report ,“Trends and Opportunities in China’s Water Treatment Sector,” for Fusion Consulting upon which this article is based. Requests for the entire report may be made to [email protected] For complete information, contact Jennifer Tow, telephone +852 2107 4299; email [email protected].

About the company
Fusion Consulting is a business intelligence consultancy providing clear strategic advice on Asia-Pacific markets. With offices in Shanghai, Hong Kong and Singapore and a network of 400 industry-specialist consultants in 16 countries, the company conducts custom research and consulting to help companies understand their markets, compete more effectively and grow into new areas of opportunity. Visit www.fusionc.com.