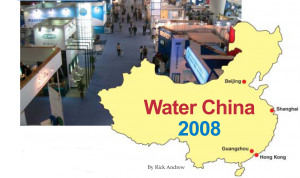 Water China, held in Guangzhou, China March 4-7, continues to grow in size, quality and the number of point of use/ point of entry (POU/POE) manufacturers exhibiting. Having attended the show for the last three years, I have seen this evolution first hand.

Statistics from German organizer Merebo are not yet available for the 2008 Show, but in 2007 the overall growth in exhibitors was 5 percent to a total of 350, with striking growth in international exhibitors, up 34 percent to 107 from 22 different nations. Over 9,000 visitors were recorded, with over 500 of them international. A large number of visitors from Hong Kong take the opportunity to travel about two hours by train to visit the exhibits in nearby Guangzhou.

Trends in 2008
One of the trends in 2008 is an increasing number of American joint venture companies exhibiting. Notable newcomers included 3M China and Ecowater China. Each had a large exhibit that was attracting significant attention, demonstrating major new commitments to the China market. GE Water & Process Technologies China Office exhibited with a large booth again this year. Other American and/or joint venture POU/POE exhibitors included Calgon Carbon, Rohm & Haas and Erie Controls – my apologies if I have omitted any.

Over the last three years, I have seen some shift in focus away from exhibitors focusing on attracting attention in the export market to targeting the China domestic market. Although there are certainly a large number of exhibitors hoping to make sales to Hong Kong and other international visitors or exhibitors, all of the American companies and American joint ventures are definitely participating in the rapidly growing residential water treatment market in China. They are primarily seeking dealers, although I’m sure that any interested retail buyers are more than welcome, as well.

Another trend I have noticed is the increasing quality of the exhibits and products displayed in them. There are fewer and fewer very small booths with seemingly random assortments of 10-inch filter cartridges and more and more relatively sophisticated displays of uniquely designed products. It is amazing to me that this transition has occurred over the course of the last three years, although one message all visitors take away from China is that the pace of modernization is rapid and the economy is booming.

Intellectual property issues
Servicemark infringement continues to be an issue at Water China. In 2007, six exhibitors were found to be misusing the NSF Mark by implying that non-certified products were NSF certified. When approached by NSF, four of the six exhibitors came into compliance immediately. Their actions included removal of unauthorized brochures, generous use of white-out on NSF Marks on certain pieces of product literature and similar steps.

Ultimately, the show organizer stopped short of expelling the two remaining offenders, despite NSF’s urging them to take this step. The US Commercial service took note of all six manufacturers who were improperly using NSF’s trademark, so they can pursue further monitoring of these manufacturers and potentially further enforcement, if necessary.

In 2008, however, only three exhibitors were found to be misusing the NSF Mark. One of them had a single non-certified string-wound cartridge that had a label bearing the NSF Mark. When confronted with the situation by NSF, the exhibitor immediately tore the label off the cartridge and threw it away. A second exhibitor had a similar scenario. A third, however, had placed the NSF Mark on a wide variety of non-certified POU reverse osmosis (RO) and ultraviolet (UV) systems, as well as on a poster in his booth. When confronted, he at first asked if it would be okay if he removed the NSF Marks after the trade show ended. When told no, he offered to apply for certification on the spot – if he could leave the NSF Mark on the products. NSF policies expressly state that only certified products may bear the NSF Mark, not products that have had certification applied for, so this was not an option either. He finally agreed to stay after show hours that first day of the show, remove the Mark from all products and remove the offending poster. When we checked back with him the next morning, we found that he had followed through as promised.

All the signs of a booming market
The growth in the number of exhibitors and especially the growth in international exhibitors, points to the booming Chinese economy. It also signals the health conscious outlook of many Chinese. I am always impressed by the focus on a healthy diet and hydration from my colleagues at NSF Shanghai Co., Ltd., NSF’s Chinese joint venture. Many of them are eager to discuss POU water treatment products whenever we get together, as they either currently own them or are considering purchasing them. Because they work for NSF Shanghai, they may be biased toward an interest in water treatment, but I don’t think their curiosity about water treatment is unusual among Chinese. Most of the exhibitors at Water China 2008 are thinking similarly.

Here in America, we take for granted the high level of quality and safety of our municipally treated water and the fact that we can drink straight from tap with confidence – although we often prefer the added safety, conditioning and improved taste offered by POU/ POE. The Chinese, though currently not enjoying similar quality of municipally provided water, are increasingly looking to POU/POE solutions to provide similar benefits to them.