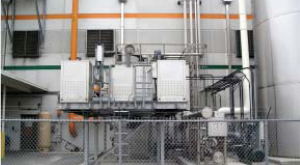 Treating cooling-tower water to prevent biological fouling, scale, and corrosion is a complex, highly monitored process. Most such treatment in the US is accomplished with biocidal, dispersant and scale-inhibiting chemicals. While chemical treatment is effective, there are considerations beyond the cooling tower. Regulations are increasingly stringent for chemical storage, handling and disposal. In many jurisdictions, chemically treated cooling tower blow-down water is regulated in and of itself. There are also consequences to workers, the public and the environment due to accidental spills, chronic chemical exposure (even at low levels) and bioaccumulation of persistent chemicals in the food chain. Reducing or eliminating chemical usage in the treatment of cooling-tower water is, therefore, the ultimate objective for many users.

Alternatives
To resolve many of the issues associated with chemical treatment, technologies using non-chemical treatment have been evolving. Non-chemical devices (NCDs) use many different technologies to achieve biological and corrosion control. Over 30 suppliers are known to provide commercially available products that can be grouped into four basic classes or methodologies: magnetic devices; induced electric field devices; ultrasonic devices and mechanical energy devices.

One of the latter is an environmentally-friendly, chemical-free treatment of water relying on kinetic energy, hydrodynamic cavitation and chemical equilibrium to control scale, corrosion and bio-fouling. It also minimizes corrosion and microbiological growth, reduces system operating costs and conserves water and energy. 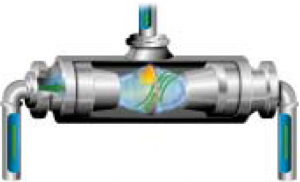 Water is pumped into a pressure-equalizing chamber from the cooling tower sump. It is then channeled into precision-manufactured nozzles (vortices) that are configured to impart a specific rotation and velocity to the water streams. The circular motion of the water is accelerated as the stream flows through the nozzles and the resultant discharge is a conical stream. The opposing water cones collide in the low-pressure stage (stabilizing chamber) to form a circular zone of very high shear force and high vacuum that is caused by the collapse of micrometer-sized bubbles and cavities.

Essentially, the pressure change causes hydrodynamic cavitation with locally high temperature at the point of collision. This cavitation creates solid particles and the rapid change in pressure to a vacuum causes the cell walls of microorganisms to break, thus killing the cell. Finally, the hydrogen-bonding molecular arrays of water are broken down, thereby allowing entrapped gasses, such as CO2, to be released and off-gassed to atmosphere. The remaining energy dissipates as turbulent flow and the treated water exits the unit at ambient pressure. Suspended matter is removed from the cooling tower sump via the second ‘side stream’ loop that is designed to sweep the debris from the floor of the sump into the automatic filtration and collection system. The filter is automatically backwashed at set times to remove solid matter, which is sent to waste.

Biological control
This technology causes a combination of physical changes to take place in the water that, together, disrupt the cell membranes of biological matter, ultimately destroying the cell. Every cell pumped through the system is subjected to vacuum, high pressure, kinetic energy high velocity collision, shear energy and high localized temperature. The pressure of the fluid inside the cell wall is in balance with ambient water pressure prior to its entrance into the unit; however, the pressure differential becomes relatively high once the cell enters the low-pressure stage that is in vacuum, resulting in a pressure imbalance between the inside and outside of the cell. The cell wall cannot withstand the pressure differential and the cell wall ruptures, dispersing the cell cytoplasm. After the low-pressure stage, localized high temperature and high pressure at the intersection point of the vortices also kills additional bacteria and cell life.

Scale and hardness control
Cooling systems build up scale over time due to the addition and concentration of soluble calcium, often in the form of calcium bicarbonate. Calcium bicarbonate can decompose to yield insoluble calcium carbonate and carbonic acid with any changes in temperature and pressure. Carbonic acid can further decompose to carbon dioxide and water. The overall equation is:

At a given temperature and pressure, these species are in equilibrium with no chemical reaction taking place. Once the pressure is lowered to a vacuum in the low pressure stage, the CO2 equilibrium is shifted between aqueous and gas phase, causing dissolved CO2 to release to the gas phase. This phenomenon, together with the high localized temperature created by the collision of the conical water streams, decreases the solubility of calcium in water and a simultaneous elevation of water pH, that causes the formation of calcium carbonate precipitate. Soluble calcium carbonate species concentrations are thus depleted (by design) both via desorption of CO2 and the precipitation of CaCO3. As the water stream leaves the unit it enters the sump of the cooling tower, where the water pressure is stabilized (at atmospheric) and the velocity of the water slows down. Submicron particles of calcium carbonate called colloids are formed and flow with the water. These become thermodynamically favored incubation sites to grow crystals composed of Ca2+ and HCO3 – ions versus metal surfaces in the system. As the molecules agglomerate, they become heavy and sink to the sump floor. At this point, the resultant calcium scale is removed via the side stream filtration and collection system. This device is periodically backwashed to remove entrapped calcium and other suspended matter.

Corrosion occurs in a system due to several phenomena mentioned earlier. All waters are corrosive to some degree; however, the level of corrosive tendency will depend upon specific physical and chemical characteristics. The materials that a given water supply will negatively affect may differ; water that is corrosive to galvanized pipe may not be corrosive to mild steel. Corrosion inhibitors that protect one material may have no effect on other materials. Biological growth in a piping system can also cause corrosion by providing an environment in which physical and chemical interactions can occur (Microbiological Induced Corrosion {MIC}). Several types of system level problems can occur if the condenser water systems are left untreated. A major source of corrosion is the addition of the bio-inhibiting chemicals themselves. This is true especially when ‘shocking’ is required as chemicals lose effectiveness over time and a chemical alternative is administered. By the time this new chemical, usually bromine- or chlorine-based, is put into service, the biological growth in the system has gotten out of control such that a super concentration of biocide is required. These chemicals tend to be very corrosive. 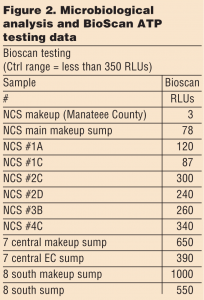 A layer of biofouling on any surface in the condenser water system acts as a haven for aerobic and anaerobic activity, bacteria formation, scale accumulation and potential corrosion. By eliminating biofouling, the potential for corrosive activity is greatly diminished. With the hydrodynamic cavitation technology, the pH level is elevated to about 9.0. At this value iron and (to a lesser extent) copper are protected from oxidation corrosion, which is less in an alkaline state. Under these conditions, metals are allowed to establish a thin layer of natural protection that is not penetrated by system water or dissolved oxygen.

An Orange Juice Processor located in Florida is an innovative plant designed to keep citrus juice products refrigerated. The facility’s state-of-the-art north condenser system (NCS) has the capacity to handle 15,000 tons of ammonia refrigeration – making it one of the largest refrigeration systems in North America. The NCS consists of a bank of 18 evaporative condensers (ECs).

The water treatment committee at the facility directed a test of the hydrodyanamic cavitation technology. They established goals, objectives and performance measurements. The emphasis was on operational efficiency, environmental compliance, water conservation and improved worker safety. 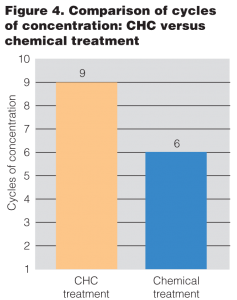 The facility purchased and installed three 250gpm systems (each consisting of the hydrodynamic cavitation unit and filtration system) to the sump basin water that serves the NCS. An automated filtration system was installed on the main condenser basin to separate and remove precipitated solids from the condenser water stream. These systems ran under the same load & conditions as the previous chemical programs used prior to this test installation.

The makeup water for all systems was the same. The hydrodynamic cavitation system was installed on new evaporator condensers. Prior to final startup, the evaporative condenser system watersides were passivated per manufacturer specifications.

Throughout the one-year evaluation period, the committee utilized independent lab data as well as manufacturer lab data to measure performance. The installation and treatment yielded the following results:

About the author
Abby Harris, Public Relations Coordinator for VRTX Technologies, Schertz, Texas. Since 2007, Harris has been working directly with the media to talk about the benefits of VRTX and chemical-free water treatment. She has a B.A. in Mass Communication-Public Relations. Harris oversees all media communication. She can be reached at 800.722.0476 x203 or via e-mail, aharris@vrtxtech.com