Ohio-native John A. Chernak, born February 26, 1929, passed away peacefully at St. Mary’s Hospital in Reno, Nev. on January 22. His career with Tomlinson Industries spanned more than four decades, during which he served as President (1966-1994). Chairman (1995) and Senior ‘Special’ Advisor (1996-2003). An active member of the North American Association of Food Equipment Manufacturers (NAFEM), Chernak served as Board Member (1987-1996), Treasurer (1990-1991), Vice President (1992) and President (1993). He was also a Certified Foodservice Professional and received a variety of awards for various activities related to the commercial foodservice equipment field, including the William W. Carpenter Award in 2001. He moved to Nevada after retiring in 2003. Chernak is survived by his wife, Arlene; daughters Linda, Christie, Paula and Michelle and six grandchildren. Donations can be made to Nevada Diabetes Association, 1005 Terminal Way, Suite 104, Reno, NV 89502. A memorial picnic in Chernak’s honor will be held in the Cleveland area in June. 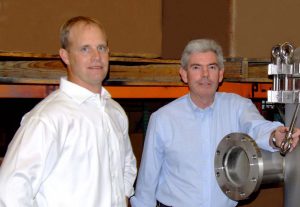 Family business Harmsco Filtration Products, celebrating its golden anniversary, announced Greg Willis as VP, Sales and Marketing and Mike Dower as Consumer Products Director of Sales and Marketing. Together, they represent 38 years of water industry experience. Previously, Willis was Vice President of Sales at Watts Water Quality and Conditioning Products, where his primary area of concentration was in distributor relations and networking. Prior to his new appointment, Dower was a specialist in commercial and residential water treatment sales and service with Culligan International Company.

Watts Water Quality & Conditioning Products has appointed Jim Suomi as Regional Sales Manager for its Florida market, based in Tampa. His responsibilities include growing Watts residential, commercial and industrial water treatment business through distributors, independent dealers and Watts Authorized Dealers. Previously with Ecowater Systems, Suomi has over 12 years experience in the industry in multiple sales and marketing positions with particular emphasis on the Florida market.

Culligan of Phoenix, Ariz. named William H. (Bill) Hansen as Sales Manager. With over 30 years of diversified sales and sales management experience, he will be responsible for

accelerating the execution of Culligan’s sales and rental programs for household water softener and drinking water systems, bottle less water coolers and home and office bottled water delivery. Hansen adds depth to his new position from experience gained in recruiting, hiring, training and motivating sales teams, for profit and inventory control responsibility and the development and execution of sales and marketing programs.

Pentair, Inc. announced that Mark C. Borin has joined the company as Vice President, Corporate Controller and Chief Accounting Officer. He most recently served as an Audit Partner at KPMG LLP. Borin holds a Bachelors Degree in accounting and economics from the University of Michigan.

Doug Wesson has been named Residential Product Sales Representative for Aries Filterworks, a division of ResinTech, Inc. He will be responsible for maintaining accounts and developing new business in the media-filled POU cartridge filter market nationwide.  Wesson has over 25 years of industry experience and previously held positions with the Nelsen Corporation and Water Resources International.

NSF International appointed Anna Schmitt-Reichert as Director of Corporate Communications and Michelle Rzendzian as Business Unit Manager for NSF’s Center for Public Health Education (CPHE). Schmitt-Reichert, with over 20 years of marketing and public relations experience, will oversee a broad range of communication initiatives, media relations and promotional activities. She holds a Bachelors Degree in business administration from Eastern Michigan University and is pursuing a Master Degree in integrated marketing communications.

Rzendzian, who joined the accounting department earlier this year, is responsible for collection and customer service activities. Her new duties include expanding the Center’s service offerings. Prior to joining NSF, she was a Sales and Marketing Administrator for the Michigan Manufacturing Technology Center. She holds a Bachelors Degree in business administration from Cleary University, Michigan.

Joel Bleth and Willard Tormaschy of SolarBee, Inc. were recently honored with North Dakota’s Marketplace Entrepreneur Award 2008. Bleth and Tormaschy, recognized as true innovators, began their industry careers with the founding of Pump Systems, Inc. in 1978. Under their leadership, the company developed the Solar Bee long distance circulation system in 2001. Both earned BS Degrees in industrial engineering from the University of North Dakota (Grand Forks); Bleth also earned a JD degree from the same institution.

Chuck Gordon was selected to head Siemens Water Technologies, a Warrendale, Pa. business unit of the Siemens Division Industry Solutions (IS). A member of Water Technologies management since 1995, he has held several key leadership positions; most recently, Gordon served as the Executive Vice President of the global equipment and systems arm of the Water Technologies business.

Aqua Finance, Inc., promoted Andrea Swiney to Assistant Vice President of Sales and Marketing. She will oversee the company’s sales and marketing efforts and manage internal and external communications. Swiney holds Bachelor’s Degrees in communications and Spanish Zimmerman Woolard from the University of Wisconsin-Oshkosh and is currently pursuing an MBA. She has more than nine years of management experience in the consumer finance industry.

Watts Water Quality & Conditioning Products has appointed Linda Haynes as Regional Sales Manager, North Central US, including North Dakota, South Dakota, Nebraska, Minnesota, Iowa, Wisconsin and Illinois. She been an inside sales and customer service representative for the past year and has over fifteen years experience in sales and customer support. Haynes’ responsibilities include growing Watts residential, commercial and industrial water treatment business through distributors, independent dealers and Watts Authorized Dealers.

Zimmerman and Woolard tapped by AWWA

The American Water Works Association (AWWA) Board of Directors announced

Gary J. Zimmerman as new Executive Director and Craig Woolard as its next president-elect. Zimmerman joined the organization after nearly two years as Executive Vice President of the Arabian Horse Association and a distinguished career in business management and development. He graduated from the University of Colorado, Boulder in 1982; during the 1981 academic year, he was selected as a US Congressional Intern. Zimmerman also holds an MBA from the University of Denver.

Woolard, Treatment Division Director of the Anchorage, Alaska Water and Wastewater Utility, will assume his new position at ACE08 in Atlanta, Georgia. Woolard is an AWWA Vice-President and member of the Board Of Directors; has served on the Credentialing, Camp Scholarship, Publications Award, Young Professionals and Strategic Planning committees; held Section Chair positions and was the Liaison Officer to the Administration and Policy Council. In 1997, he was named Section Volunteer of the Year and he received the AWWA Fuller Award in 2003.