Background
Arsenic was first discussed (as a unique chemical) by a German chemist in the year 1250. It is a notoriously poisonous metalloid with a long and toxic history used in pesticides and the like. When US EPA reduced the MCL for arsenic from 50 ppb to 10 ppb in 2001, many municipal and private sources of drinking water previously considered ‘safe’ now had to be treated. In arriving at the new standard, several different levels were considered. Studies showed that the potential mortality risks were greatly reduced with a reduced MCL. A provisional World Health Organization (WHO) standard had long been at 10 ppb; however, the risk at 10 ppb is still not zero. The only zero risk level for arsenic in drinking water is zero.

Occurrence of arsenic in nature
Arsenic exists at levels of two to three ppb in seawater and in soil (but up to 13 ppb in shale). Coal ash (associated with shale and a byproduct of burned coal) contains up to 500 ppm of arsenic, so the potential for very high levels in ground water is probable. Levels in water of 1,000 ppb are rare but I have done work on systems in excess of 10,000 ppb (Arsenic and the Old West, WC&P, Feb. 2004). Naturally occurring arsenic usually exists as an oxy-anion with a valence of +5 (arsenate As +5 as AsO4-3) or arsenite (AsO3-3) as a +3. Arsenide with a valence of -3 also exists.

Conventional removal
The +5 species, the prevalent species found in ground water, is the most readily removable by RO or strong base anion exchange (regenerated with salt at the 10 lb/cu ft level). The +3 species is generally removed by first oxidizing to the +5 with chlorine or through adsorption onto selective media. RO systems remove 95 percent or more of arsenate and 65 – 75 percent of arsenite. Strong base anion resin can handle most levels of arsenic +5 with a capacity of 2000 to 10,000 gallons per cu ft and is often the treatment of choice, particularly if other anions such as uranium, nitrate or sulfate have to be reduced. Be careful of high sulfate levels that might cause ‘peaking’ or ‘chromatographing’ of the arsenate. Sizing is two to four gpm/cu ft, but do your homework and do your customer and yourself a favor by having the installation tested since there are many variables (in addition to the very real possibility of having at least some of the As present as +3). It is extremely important that you involve an experienced and competent analytical lab for sampling and analyzing for arsenic. The samples must be collected properly, split and preserved properly, and ‘speciated’ properly to determine the relative amounts of As+5 and As+3.

One item to be cautious of is spiking of other water contaminants and not just sulfate. There have been instances with arsenic and nitrate spiking if proper review and analysis is not conducted.

Removal by adsorption
The most recent media introduced for the treatment of arsenic are the GFO (granular ferric oxide), GFH (granular ferric hydroxide) and hybrid iron treated anion exchange resins. None of these media are regenerable on site, but the hybrid resins can be and are regenerated with an off-site facility, which greatly reduces their operating costs by up to 50 percent or more by avoiding the need for replacement. Regenerated resins have demonstrated the ability to undergo multiple cycles with no appreciable loss of capacity. Note: In some cases there have been issues with the NSF certification of these resins being maintained after they have been pulled out of the water treatment plant and taken off sight for regeneration. Be sure to know local regulations regarding off site regeneration, as it is different from state to state. Media that is regenerated off site may not be permitted back in to the same treatment vessel due to certification issues.

The capacity of these media is measured in hundreds of thousands of gallons of water per cubic foot of media. Such media work by binding the arsenic to the iron and it does not leach off. This sounds like the perfect solution for residential problems; however, these media are not exclusively arsenic selective. They also remove other oxy-anions such as vanadium, molybdenum, selenium, uranium, phosphate and silica and are sensitive to pH and flow rate. This article examines the impact of several variables to help you in designing your treatment systems.

Let’s assume we are called upon to treat a private well. The homeowner says his arsenic is 50 ppb but doesn’t know its species (As+5 and/or As+3). He knows little else about the water but says everything is OK. You proceed as if there is nothing else in the water to worry about and according to the ‘iron’ media supplier’s brochure, you can treat over three million gallons with one cu ft of their media. For the average family using about 300 gallons of water per day, that filter will last over 27 years!! But there’s a catch. That capacity is achieved under ideal conditions with no interfering oxy-anions, favorable pH and a very slow flow rate. This ‘ideal’ water doesn’t really exist in the real world. Let’s look at the impact of all those unreported variables that play a critical role in a properly designed system.

Effect of pH
The pH of the feed water dictates the strength of the ionic charge on the arsenic ion. Lower is better. Assuming we have a 50 ppb As+5 feed at a pH of 7.0, we size our system for an EBCT of two minutes (3.75 gpm/cu ft) and our literature tells us we can treat about 750,000 gallons per cu ft. Let’s call that the 100 percent performance and see what varying the pH will do. (Figure 1) 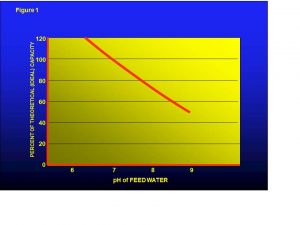 Effect of flow rate
Since the uptake of arsenic by an iron-based media is a kinetic reaction, the contact time is important. The slower the reaction, the larger the treatment column has to be and the lower the capacity per cubic foot of media due to the exhaustion front moving down the column. We measure contact time as EBCT (empty bed contact time), which is the gallons of media divided by the flow rate in gpm. One cubic foot is 7.5 gallons; thus, a flow design of 3.0 gpm/cu ft is (7.5/3.0 = 2.5 minutes) an EBCT of 2.5 minutes. If our ideal filter has a capacity of 100 percent with an EBCT of 2.5 minutes, how will varying the flow impact it? (Figure 2) 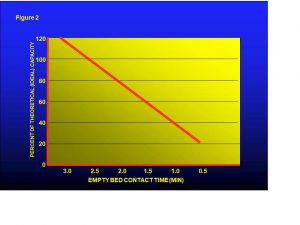 Effect of other contaminants
Since these adsorptive media are not exclusively arsenic scavengers and will also pick up many other anions, capacity is compromised by their presence. In our ideal filter feed stream, we introduce phosphate ions. PO4-3 can typically exist in ground water at levels of 50 to 125 ppb or more but is rarely included in most lab analyses. (Figure 3) 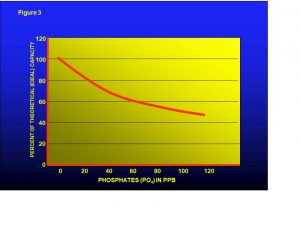 Silica is always present in ground water at levels of five to 50 ppm. This may not be reported on a drinking water analysis, but silica level has a direct bearing on arsenic uptake. (Figure 4)

Vanadium is present in most ground waters at levels of 10 to 60 ppb. It is very well adsorbed by iron media and is a direct replacement for arsenic on the adsorption site. (Figure 5) 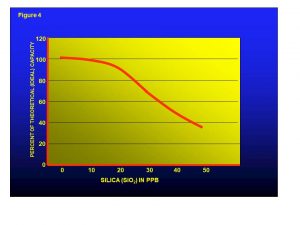 Other common oxy-anions that commonly occur in ground water are molybdenum, selenium, antimony and uranium. Collectively, they may be present at up to 50 ppb or more. (Figure 6) 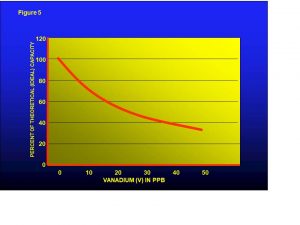 Conclusion
There maybe some interactions between and among various contaminants that produce an effect that is less than additive. In other words, it may not be as bad as the graphs predict. However, one should be aware that there are many unknowns that can be very detrimental to the theoretical capacity of an arsenic adsorption media. One simply cannot afford to guess and there is no substitute for getting a good analysis where peoples’ health is concerned. On the bright side, even at 20 to 30 percent of the unadjusted capacity, one can still deliver a treated volume of water of 150 to 250,000 gallons/cu ft or about two years for a single family home with a one cubic foot unit. System configuration is usually redundant with a lead/lag arrangement of one cubic foot each. When breakthrough occurs on the lead unit, it is replaced by the lag unit and a new polishing (lag) unit is put in play.

About the author
C.F. ‘Chubb’ Michaud is the CEO and Technical Director of Systematix Company, Buena Park, CA, which he founded in 1982. An active member of the Water Quality Association, Michaud has been a member of its Board and of the Board of Governors and past Chair of the Commercial/Industrial Section. He is a Certified Water Specialist Level VI. He serves on the Board of Directors of the Pacific WQA (since 2001) and Chairs its Technical Committee. A founding member of WC&P’s Technical Review Committee, Michaud has authored aor presented over 100 technical publications and papers. He can be reached at Systematix, Inc., 6902 Aragon Circle, Buena Park CA 90620; telephone (714) 522-5453 or via email at cmichaud@systematixUSA.com.