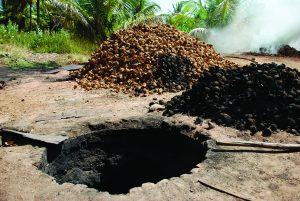 The use of activated carbon to remove harmful impurities like organic contaminants from water has been practiced since Roman times. Activated carbon is the generic term used to describe a family of carbonaceous adsorbents with a highly amorphouse form and extensively developed internal pore structure.

Activated carbon is extremely porous with a very large surface area, which makes it an effective adsorbent material. This large surface area relative to the size of the actual carbon particle makes it easy to remove large amounts of impurities in a relatively small enclosed space.

Many natural substances are used as base materials to make activated carbon. The most common of these used in water purification are lignite, bituminous and anthracite coal and peat, wood and coconut shell.

Different base materials and the activation process results in unique pore size and pore distribution. The pore size grouping in carbon is commonly described by its pore diameter. Macro pores (above 50 nanometers {nm}in diameter); meso pores (2 to 50 nm diameter) and micro pores (under two nm diameter). Another way to think of and visualize pore structure is transport and adsorption pores: transport pores bring adsorables to the adsorption pores.

In terms of base materials, coconut shell and wood are renewable resources. Coconut plantations with millions of acres of land continue to provide all the benefits of green trees to our environment in spite of using billions of coconut shells per year for activation.

Activated carbon is produced from coconut shells in a two-step process.

The first step in activation is to carbonize the shells to drive about two-thirds of the volatiles out of the shells, creating a carbonaceous mass full of tiny pores.

In the second stage, this carbonized base material is activated at high temperature (1,100°C/2012°F) in steam. Activation temperature and the amount of activation time are important to create the internal pore networks and to impart certain surface chemistries (functional group) inside each particle. In essence, the total activation process gives carbon its unique adsorption characteristics.

The process of carbonization is to convert coconut shells to char or charcoal.

The charring process (the making of charcoal) is known as pyrolysis, which is the chemical decomposition of the shell by heating in the absence of oxygen.

Coconut shells are carbonized in an age-old process commonly known as the open-pit method. In this process, earth is used as an insulator and to heat the shells in the absence of oxygen. The pit charcoaling cycle consists of three stages: 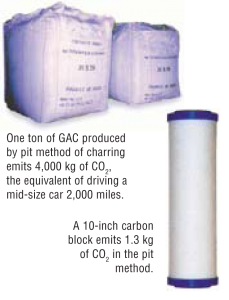 The temperature maintained in the process is vital for complete pyrolysis. Experiments have shown that the charcoal yield is directly proportional to the temperature in the pits.

In addition, the amount of methane released into the atmosphere is directly related to the temperature in the pit.

By and large, pits yield 30 percent char, which means they maintain a temperature of 500° C (932°F). Several experiments have been conducted to measure the amount of gases released; on average, one million ton (MT) of coconut shells releases about 12 to 15 Kg of methane into the atmosphere.

Greenhouse gases insulate the Earth from the cold of space. As incoming solar radiations are adsorbed and re-emitted back from the Earth’s surface as infrared energy, greenhouse gases (GHGs) in the atmosphere prevent a portion of this heat from escaping into space, instead re-emitting the energy back to further warm the surface.

Many studies indicate human activities are amplifying the natural greenhouse effect. Some suggest that Our emissions of GHGs are modifying the Earth’s energy balance between incoming solar radiation and the heat released back into space, resulting in climate change.

Climate change can alter temperature, precipitation and sea levels and may adversely impact human and natural systems, including water resources, human health and settlements and the biodiversity of our ecosystems.

The apparent acceleration of the climate change model over the last 50 years and the increasing confidence in global climate model results adds to the compelling evidence that climate is being effected by GHG emissions from human activities. If this is true, we all must do what we can to limit GHGs.

There are several GHGs, of which water vapor, methane and carbon dioxide are both naturally accruing and industrially generated. CO2 and methane are emitted primarily from fossil fuel combustion. Land-use changes and deforestation are significant sources of CO2 emission. 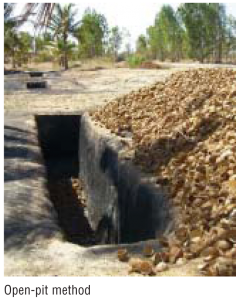 India, Philippines, Sri Lanka and Indonesia are the primary countries that char coconut shells for activation to be used in water and air purification. Several countries in the Association of South East Asian Nations (ASEAN) region in recent years have started doing so as well.

A conservative estimate is that in the four leading countries, about 350 MT/year of methane is emitted to the atmosphere by the pit method of charring. This is the equivalent of the CO2 emitted by 350,000 mid-size cars driven 20,000 miles per year. Methane is four times more effective (and therefore detrimental) as a GHG compared to CO2.

In the pit method of charring coconut shells, GHGs are emitted to the atmostphere without any control and treatment of effluent gases. Recently, a company has developed a novel process working with the Indian Institute of Science (Bangalore) to char the coconut shells in a reactor, thereby capturing the GHGs and using them under controlled conditions for the production of thermal energy.

Coconut shells contain cellulose, hemicelluloses and lignin, which an average composition of C6 H10 O5 with slight variations depending on the nature of the biomass. Theoretically, the ration of air-to-fuel required for the complete combustion of the shells, defined as stoichiometric (pertaining to or involving substances that are in the exact proportions required for a given reaction ) combustion, is 6:1 to 6.5:1 with the end products of CO2 and H2O.

In this new process, the combustion is carried out in sub-stoichiometric conditions, with the air-to-fuel ratio being 1.5:1 and 1.8:1. The gas so obtained is called producer gas, which is combustible. This process is made possible in a device called a ‘char reactor’ in a limited supply of air. Two reactions take place: oxidation and reduction.

The first part of the sub-stoichiometric oxidation (air with shells) leads to the loss of volatiles from the shells and is exothermic. It results in peak temperatures of 800°C (1472°F) and the generation of gaseous products like carbon monoxide and hydrogen (in the same proportions and carbon dioxide and water vapor, which, in turn, are reduced in part to carbon monoxide and hydrogen by the hot bed of charcoal generated during the gasification process. Reduction reaction is endothermic; generating combustible products like CO, H2 and CH4 as indicated below.

Since char is generated during the gasification process, the entire operation is self-sustaining.

The development of the state-of-the-art technology wherein the shells are fed from the top with a twin air entry re-burn process by the company is the critical element. This process consists of a fuel and ash handling system, a gasification system reactor and gas cooling and cleaning systems. The process is unique and prevents tar formation during pyrolysis.

The char produced in this process is of consistently good quality compared to that produced by the open pit method. It has a consistent, high iodine value and is free from contaminants coming from the pit, such as soil, silica and pebbles. This char forms a good base material for the activation process, enabling high performance.

Dr. P.A. Shankar is Chief Technology Officer for Singapore-based Filtrex Holdings Group. He can be reached via email to Shankar@filtrex.co.in.