Over the past year a number of emerging water contaminants received increased press coverage, leading to heightened awareness in the public and regulatory eye. Three of these: uranium, trichloroethylene and the group of chemicals known as PFCs – have been field tested using point of use (POU) reverse osmosis (RO) systems as a means for controlling these contaminants for homeowners.

PFCs
Perfluorochemicals (PFCs) are a group of manmade chemicals that are well known for their chemical resistance and stability. Due to this, they have been widely used for decades in the manufacturing and processing of a very broad spectrum of consumer goods including electrical wiring, medical devices, clothing, household and automotive products. PFCs are one of the key ingredients for stain-resistant carpets and clothing, as well as non-stick cookware and paper coatings for oil and moisture resistance, such as used in microwave popcorn bags.

The three chemicals within the PFC grouping that have received the most attention are perfluorooctanoic acid (PFOA), essential in the polymerization of fluoropolymers; perfluorooctane sulfonate (PFOS), the chemical used in most stain repellents; and perfluorobutanoic acid (PFBA), used in lubricants, fire retardants and suppressants, pesticides, surfactants, emulsifiers and in making photographic film. PFBA may also be a breakdown product of other PFCs. One of the derivitaves of PFOA is the ammonium salt (ammonium perfluorooctanoate), which is commonly called C-8. Due to PFOA’s widespread use in manufacturing, this entire group of chemicals is sometimes referred to as C-8.

US EPA has announced an initiative to phase out 95 percent of the uses of PFOA by 2010 and eliminate it entirely by 2015. PFOS production was eliminated in 2002. 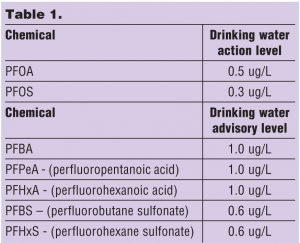 Historical studies
Minnesota is one of the states that have witnessed production of consumer products using PFCs since the late 1950s. As such, it is among the states most aggressively working on both the determination of a health impact for the class of chemicals and on the investigation of POU water filtration systems to remove these chemicals from the water.

What made these chemicals a good choice in manufacturing has also caused them to be ubiquitous within the environment. In 2001, a Michigan State University study found PFCs in the blood of 400 different mammals, fish and birds on all seven continents. Some of the highest concentrations have been found in bald eagles and mink in the midwestern US. Minnesota Department of Health (MDH) has conducted studies on fish populations and has determined that in some areas, like the Mississippi River, people should limit their fish consumption (from that water source) to one meal per week or even one per month. Some studies indicate that PFCs can easily enter groundwater and travel long distances, emerging in areas that are not under any direct source for the chemical. Additional studies have indicated that PFCs can travel long distances in the air as well; eventually depositing on soil, subsequently getting in to the groundwater. Studies also indicate that nearly all people have some PFCs in their blood, regardless of age. The mechanism of how this occurs is currently unknown.

Where there is currently no MCL set for this group of chemicals in drinking water, MDH has set the following action levels for these chemicals.

POU study
MDH, in conjunction with Water Science and Marketing and WQA, have been working on a project to evaluate commercially available POU products and their ability to reduce PFCs from drinking water.

The criteria for the project were:

In brief, there were 29 systems tested (nine carbon-based and 20 RO). Review of the test results indicates that for the vast majority, the RO systems performed significantly better than the carbon-based systems. In all but one case, the RO systems removed the PFCs to non-detect levels. Samples were taken post-RO membrane and then again post-carbon filter if the system was equipped with a post carbon filter. While there was some minor break through on some of the RO membranes by themselves, in all but one case the complete RO system with the post carbon block removed the challenge species to non-detect levels for all three tests. 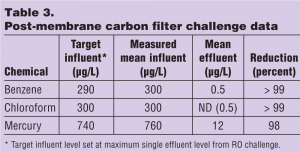 Based upon these initial test results, six carbon-based units and eight RO systems have been recommended to move on to Phase II of the testing program; results of that phase are expected in May of 2008.

Additional information on the testing protocol can be found at www.WaterThinkTank.com.

Uranium
We frequently receive calls from various operators, facility owners, regulatory and State officials regarding unique water issues in small communities. One of the water contaminants that has gained significant importance across much of the American west is uranium.

Uranium is a unique water contaminant for a few reasons. First, due to the health considerations required to test for the reduction capacity of uranium in a lab (keep in mind that the challenge is typically set at the 95th occurrence percentile, or three times the MCL), challenge test levels for uranium become a significant health risk for the testing laboratory. As a result, there is currently no certification laboratory test protocol established for the reduction of uranium (and I do not foresee any in the near future).

Second, many areas are not presently testing for uranium, since there are a number of current compliance struggles such as the 2006 arsenic regulation and the LT2 Rule to name two, as well as new regulations in the process of being implemented that are of concern for both the regulatory agencies and the water districts . Due to this, uranium (or gross alpha, as some like to call it) is a bit of a ‘sleeper’ water issue that is starting to become more prevalent.

Test site #3 is an interesting facility as one of the homeowners had purchased an RO system approximately two years prior and did not want to get rid of the system. Upon inspection of the unit we discovered it was one of the RO systems being proposed for the community and thus represented a good test for long-term uranium reduction. Both the new and the old RO system reduced the uranium to non-detect levels.

Where this will become more of an issue is in states that require disclosure of water quality during the sale of a home if it is on a private well, which is becoming more popular as a requirement across the country. In some cases such as in California, Wisconsin, Iowa and Massachusetts, the state requires only certified products for the specific claim (in this case uranium) can be installed as a means for compliance to the drinking water regulations. Since there is no protocol for uranium removal in any of the DWTU suite of standards, there are no POU products on the market that are certified for the reduction of uranium. Without this certification, there is a catch for the acceptance of POU systems being used for compliance purposes during the home transaction in the event the facility has a uranium or gross alpha problem in the drinking water. 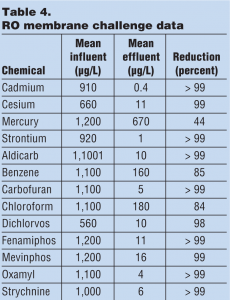 This may not be an emerging contaminant nationally, but in the Phoenix area it has received a significant amount of press due to the two contamination notices that have occurred locally, one in November 2007 and then again in January of ‘08.

Trichloroethylene (TCE) is a nonflammable liquid that is used mainly as a solvent to remove grease from metal parts. It is also an ingredient in adhesives, paint removers, typewriter correction fluids and spot removers. It is not found naturally in the environment; however, it has been found in underground and surface waters as a result of the manufacture, use and disposal of the chemical.

TCE is one of the chemicals that is covered under the Standard 53 Volatile Organic Compound (VOC) protocol. Under Standard 53, chloroform is utilized as a surrogate VOC in order to evaluate a product’s capability of reducing the complete VOC list of chemicals.

Insert the two tables here
As witnessed in the testing results, the RO membrane on its own provided an 84 percent reduction capability for chloroform. In conjunction with the carbon post filter, as a complete system it achieved over 99 percent removal capability.

During the week following the public announcement of the TCE contamination, we received a significant number of consumer calls; some wanted a water treatment system, others asked about the RO system they already had installed. The sound of relief from those homeowners when we informed them that the unit they had was certified for the reduction of TCE was truly rewarding. Customers were instructed to sanitize and perform standard maintenance on the systems once the alert was over; however, in the interim they were very relieved to know that they had provided their family a level of security against this ‘point in time’ water contamination.

Conclusion
My previous articles discussed POU RO systems for small communities for arsenic, nitrate and fluoride. The main factors for these communities regarding compliance is cost and the quality of water being provided to the community through a POU RO. Over the years, there have been new emerging water quality issues like PCE and uranium, as well as ‘point in time’ water concerns such as witnessed in Phoenix with TCE. In all of these cases, the POU RO system has been proven to reduce or remove all of these drinking water contaminants from the water. As the arsenic regulation continues to work towards enforcement across the states and as new emerging issues continue to arise, it is good to know that these POU systems are able to provide consistent water quality and added value to both the individual homeowner and the small community.

About the author
Shannon P. Murphy is Vice President of Municipal Water Programs for Watts Premier Inc., a division of Watts Water Technologies, of North Andover, Mass. Murphy has a Bachelor’s degree in biology from Concordia University in Montreal, Canada and Master’s degree from Wayne State University in Detroit, Michigan. Murphy has been a member of the WC&P Technical Review Committee since 2004. He can be reached at MURPHYSP@watts.com.