Membrane technologies
The pressure-driven membrane separation technologies of microfiltration (MF), ultrafiltration (UF), nanofiltration (NF) and reverse osmosis (RO), as a group, provide the greatest range of contaminant removal. As a result, these technologies are often the lynchpins for potable water production systems.

Simply put, these technologies are continuous filters. The type of contaminant removed is a function of membrane polymer selection and its pore size.

Although they all provide separation of contaminants from the solvent (usually water), each performs a specific function and has advantages and disadvantages when compared to the others in a particular application.

The development in filtration technology known as crossflow or tangential flow filtration allows for continuous processing of liquid streams. In this process, the bulk solution flows over and parallel to the filter surface and, because the system is pressurized, water is forced through the filter medium and becomes permeate. The remaining water exits the membrane device as concentrate and carries out the contaminants rejected by the membrane. Turbulent flow of the bulk solution across the surface minimizes the accumulation of particulate matter on the
filter surface and facilitates continuous operation of the system.

Microfiltration
Figure 7 depicts the mechanism of MF. Generally, MF involves the removal of particulate or suspended materials ranging in size from approximately 0.01 to one micron (100 to 10,000 angstroms).

Ultrafiltration
Figure 8 depicts UF, which is used to separate dissolved, non-ionic materials typically smaller than 0.01 micron (100 angstroms). The removal characteristics of UF membranes can be described in terms of ’molecular weight cutoff’ (MWCO), the maximum molecular weight of compounds that will pass through the membrane pores. MWCO terminology is expressed in Daltons. (see sidebar) Basically, UF is used to remove dissolved organic contaminants while suspended solids are removed by MF.

Nanofiltration
This is an intermediate process between UF and RO. The MWCO properties of NF membranes are in the range of 400 to 800 Daltons (<10 angstroms). Ionic rejections vary widely depending upon the valence of the salts; multivalent salts such as magnesium sulfate (MgSO4) are rejected as much as 99 percent, while monovalent salts such as sodium chloride (NaCl) may have rejections as low as 20 percent. Figure 9 illustrates NF.

Reverse osmosis
This process will remove almost all dissolved organic (non-ionic) solids with molecular weights above approximately 100 Daltons, as well as a high percentage of ionic materials. RO embranes are not perfect: they will typically remove 95-99 percent of the ionic contaminants. Figure 10 illustrates the RO mechanism.

Membrane device configurations
To be effective, membrane polymers must be packaged into a configuration commonly called a device, module or element. The most common element configurations are: plate and frame, capillary fiber, tubular and spiral-wound. Figure 11 illustrates these configurations.

Plate and frame
This element incorporates sheet membrane stretched over a frame to separate the layers and facilitate collection of the permeate, which is directed to a center tube.

Capillary (hollow fiber)
These elements are similar to the tubular element in design, but are smaller in diameter. They are usually unsupported membrane polymers requiring rigid support on each end provided by an epoxy ’potting’ of a bundle of the fibers inside a cylinder. Feed flow is either down the interior of the fiber or around the outside of the fiber.

Tubular
Manufactured from ceramic, carbon, SS or a number of thermoplastics, these tubes have inside diameters ranging from 0.25 inch up to approximately one inch (six to 25 mm). The membrane is typically coated on the inside of the tube and the feed solution flows through the interior (lumen) from one end to the other, with the permeate passing through the wall to be collected on the outside of the tube.

Spiral-wound
This element is constructed from an envelope of sheet membrane wound around a permeate tube that is perforated to allow collection of the permeate. Water is purified by passing through one layer of the membrane and flowing into the permeate tube. It is by far the most common configuration in water purification applications.

From the perspective of cost and convenience, it is beneficial to pack as much membrane area into as small a volume as possible. This is known as packing density. The greater the packing density, the greater the membrane area enclosed in a certain sized device and generally, the lower the cost of the membrane element. The downside of these elements is their greater propensity for fouling. Table 3 summarizes this data. 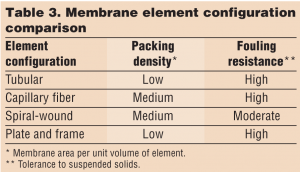 Process
Suspended solids, microorganisms and dissolved organic contaminants are effectively removed by the ’sieving’ process; that is, contaminants too large to pass through the membrane pores remain in what becomes the concentrate stream. For dissolved inorganic (ionic) contaminant removal, the membrane technologies of NF and RO must be employed and, since the pores of the membranes, although smaller than for the MF and UF membranes, are not small enough to physically sieve out these contaminants, a different mechanism applies here. There is lack of agreement among the experts as to the exact mechanism of this rejection; however, it is known that multivalent salts are rejected to a higher degree than monovalent salts. This characteristic is exploited with NF membranes, which exhibit overall lower salts rejection than RO membranes but remove multivalent salts to a much higher degree than monovalent salts. These membranes are also known as softening membranes because of their ability to remove the divalent hardness ions of calcium and magnesium, with little effect on monovalent ions such as sodium. 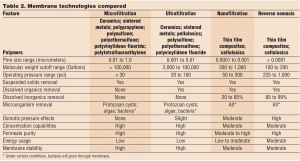 The thin film composite RO polymers now on the market have such high salts rejection characteristics that both monovalent and multivalent salts are rejected to almost the same degree. Flux is a fundamental characteristic of all membranes, defined as the permeate rate through a given area of membrane at a specific temperature and pressure. Recovery is defined as that percentage of the feed flow rate that passes through the membrane and becomes permeate. 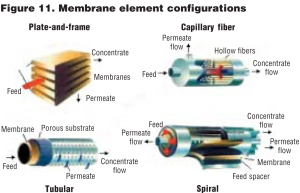 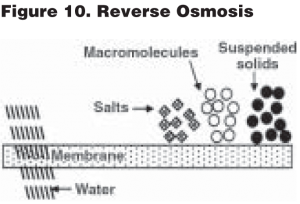 Recovery is defined as that percentage of the feed stream flow rate that passes through the membrane and becomes permeate. Recovery is set by the system design based on the pump flow rate and concentrate valve setting.

The advantage of operating systems at high recoveries is that the volume of concentrate is small and the flow rate of the feed pump is smaller. The potential disadvantages are numerous:

Conclusion
The design of an effective, economical residential drinking water system requires understanding of water chemistry, comprehension of the appropriate treatment technologies and the ability to assemble them into the optimum total treatment configuration. Hopefully, this article has provided some education and insights.

About the author
Peter S. Cartwright, President of Cartwright Consulting Co., Minneapolis, is a registered Professional Engineer in Minnesota. He has been in the water treatment industry since 1974, has authored almost 100 articles, presented over 125 lectures in conferences around the world and has been awarded three patents. Cartwright has chaired several WQA committees and task forces and has received the organization’s Award of Merit. A member of the WC&P Technical Review Committee since 1996, his expertise includes such high technology separation processes as RO, UF, MF, UF electrodialysis, deionization, carbon adsorption, ozonation and distillation.

Cartwright is also Technical Consultant to the Canadian Water Quality Association. He can be reached at (952) 854-4911; fax (952) 854-6964; email: pscartwright@msn.com or website: www.cartwright-consulting.com