The current low cost of desalted seawater is $600 (US) per acre-foot or 326,000 gallons. [Insert Figure 1, which I created] Figure 1 shows this acre-foot cost is equal to $0.01 per five gallons. By comparison, a quart of soda pop costing $1 (US) is 2,000 times more expensive. Further, this article contends that there are six ways to reduce the cost of seawater desalting by 50 percent in the near to moderate future.

Precise dates cannot be assigned for the implementation of these seven desalting techniques, as it is unknown to what degree governments, water agencies and venture capitalists may promote and invest in these techniques. Nevertheless, as it commonly takes from 10-15 years from the planning to the operational phase of major water projects, it is critical that water agencies and governments have greater awareness of these techniques in their planning options. The ‘50 percent’ in the title is an approximation; future cost savings may be either higher or lower.

Beyond these six ways to reduce costs, there are many non-construction cost benefits related to desalination. These include improved human health from higher quality water, not depleting additional water from fresh water lakes and rivers, reduced groundwater decline, better drought preparation, reduced need for 100-mile water pipelines and potentially reduced war prospects in a few water-scarce regions around the world.

Worldwide, millions of people (overwhelmingly women) carry 100 percent of their water a couple of hundred yards–if not over a mile–on a daily basis. These women have reduced opportunity to pursue employment, have less time to educate their children and less time for other household activities. Worse still, they must endure the anxiety that they may have carried contaminated water to their family. Often, reducing or eliminating this hardship is not considered as a benefit when calculating desalination costs – although it certainly should be.

As governments recognize the indirect benefits and ways to reduce desalting costs, they can simultaneously reduce the annual toll of millions of waterborne deaths and tens of millions of cases of waterborne illnesses. If governments were to partially subsidize desalination costs in appropriate locations, even a poor household making $10 per day might gladly purchase one five-gallon unit of high-quality water. In this context, Mexico uses more bottled water, per capita, than the US. As some poor countries use more bottled water, have more waterborne diseases and have lower water quality standards than the US, such countries may be more inclined to pursue new desalting techniques than advanced countries. 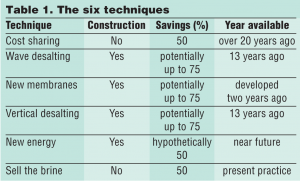 Table 1 introduces these six techniques by name, depicts whether or not they are construction-based and approximates potential future savings compared to conventional desalting and the year when they became or will become feasible.

Technique one: cost sharing
Desalination costs for a city can be reduced by 50 percent if the city enters into an agreement with its state and/or national government. Under such an agreement, the city could obtain 50- percent funding only if it attained 25-percent water conservation. Such a conservation-based agreement could be a win-win situation. The national government may want to test an innovative desalting prototype for potential marketing to other cities or countries. The 25 percent water conservation saves additional monies due to lower water treatment costs and reduced water infrastructure repair costs. Another cost-sharing remedy is for the city and country to obtain technical or financial assistance of a major desalting company with the country granting the company priority or compensation at other locations in the future. Author understandssuch federal-state cost sharing is common in highway and other public projects, so why could there not be such cost sharing in innovative water desalting projects? The percent levels assigned are approximations; a national government might pay for 40 percent of the cost if a city attained 30 percent water conservation, for example.

Technique two: wave-power
According to an article in the July 1995 issue of Discover magazine, “Irish and American engineers are finishing a prototype desalination system that could lower the cost of producing freshwater by more than 75 percent.”1 Instead of using oil, this system is powered by pumps using the continual energy of waves near a shore. Other researchers are working on non-shore based wave-power. An operational plant has been built in Scotland and in 2007, the Scottish government announced plans to develop and test nine devices.

Technique three: new membranes
According to an article in Technology Review, “The new membranes, developed by researchers at Lawrence Livermore National Laboratory (LLNL), could reduce the cost of desalination by 75 percent, compared to reverse osmosis (RO) methods used today.”2 The small LLNL nanotube-based membranes filter water far more efficiently than those in conventional desalting plants. It will be years before these or similar membranes will be manufactured and used at desalting plants.

Technique four: vertical desalting
Other researchers are pursuing vertical desalting. One variation3 of vertical desalting (invented by the author) is further explained in US patent number 6,083,382. In southern California, Florida and elsewhere, land cost is a major cost of conventional horizontal-based desalting. Vertical-based desalting uses over 75 percent less land and over 75 percent less costs. This technique uses wind, solar or tidal energy and a 21st century Archimedean screw to elevate seawater to an approximate 10-15 story vertical building. Gravity then becomes the power source to produce a desired ratio of desalted water and/or electricity. Other cost-saving features of this technique are progressively finer membranes used prior to elevating the water, computer monitoring and the ability to release desalted water at a higher elevation, which reduces distribution costs for a city.

Technique five: other energy sources
Tens of thousands of researchers are currently pursuing new energy sources. Japan, Israel and other countries are actively seeking innovation. The International, European, Middle Eastern, Indian and other desalination associations are all dedicated to the goal of significantly lower energy costs. A 50-percent cost reduction is analogous to what other researchers postulate in the energy savings in the average MPG of new cars in the near to moderate future.

In 2007, between Las Vegas and Hoover Dam, a solar thermal installation opened on 400 acres of desert. Such plants offer the prospect that desalting can benefit cities located hundreds of miles from the ocean. 90 percent of the water used in Las Vegas derives from Lake Mead, which was created by Hoover Dam. An inland city (Las Vegas, Phoenix, etc.) ties the solar power into a hydroelectric system. The solar power is then linked to a coastal desalting plant. A coastal city gets the higher quality desalted water and the inland city takes an equivalent amount of water from a source like Lake Mead. Israel recently opened a new desalting plant that reuses energy at a projected cost savings of about 40 percent.

In Australia, Perth has built a desalting plant entirely powered by a wind farm 160 miles away. As airports and housing developments have been constructed in the ocean, it would be far easier to create a much smaller island desalting plant in the ocean. Tidal powered plants are also being pursued; one of the world’s strongest tidal source locations is in the Gulf of California. Offshore wind farms, geothermal and hydrogen power are among other possible energy sources. At some time in the near future, energy costs will be reduced by over 50 percent.

Technique six: sell the brine
Gold, silver and many other elements are found in seawater. Conversely, many of these elements are declining both nationally and globally. These two indisputable trends imply the monetary value of brine recycling will soar. The Salt Institute has identified more than 14,000 known uses for salt; Table 2 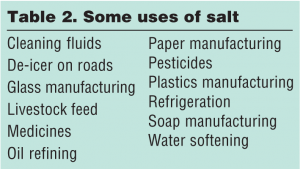 shows some of them (both direct and indirect).4 About 95 percent of the salt used in the US is not used as food seasoning. Desalting plants could now find it profitable to sell the brine residue at or near a plant locations. In the near future, improved chemical separation techniques are likely to make the brine far more lucrative: researcher innovations and governmental investments in improved chemical separation techniques will yield additional savings.

Conclusion
It is, of course, possible to combine a few of the six techniques identified above. One might wonder what the cost reduction would be if a city built a vertical-based renewable-energy powered desalting plant using LLNL-type membranes with national cost sharing and sold both water and brine at the location. Would the cost be 85 or 95 percent less than conventional desalting? Or would the benefits exceed the costs?

According to its website, The Bureau of Reclamation is the largest wholesaler of water in the US (see www.usbr.gov ; Then go to their ‘about us’ icon). It is better known for managing hundreds of dams and reservoirs in western states. Insofar as half of these six ways already exist (some for at least a decade), the US and other advanced nations have been negligent in promoting a prudent desalting future. It appears major water agencies and Uncle Sam should have far greater investment in cost sharing, funding for desalting research and development, brine usage and building small pilot plants. Such investments would deter foreign desalting investment in the US, allow US companies to assist water-scarce nations around the world and generally improve the image of the US.

When most people think of seawater desalting, they think of oil-powered plants built in places like Saudi Arabia in the 20th century. There are other choices in the 21st century. Yet in a few locations in the US and the world, there are current plans to use 19th century pipeline technology to transport water over 200 miles!

In addition to the six ways identified in this article, there are certain to be other ways to reduce the costs of seawater desalting by more than 50 percent. Innovative ways to lower the costs of desalting have the clear potential to do at least as much good for humanity in the next 25 years as computers have done in the last 25 years.

About the author
Mark Bird, a professor at the College of Southern Nevada, is an author of over 30 water-related articles. Bird welcomes reactions by email at: mark.bird@csn.edu.