Preventing Hepatitis A Infections: A Multibarrier Approach to Success

It seems fitting to kick off the New Year with some good news, so instead of reporting on the latest emerging disease-causing organism, this month’s article will focus on a fight that we appear to be winning. Hepatitis A, a virus long recognized as a concern related to foodborne and waterborne infections, causes acute hepatitis resulting in flu-like illness, jaundice (yellow skin or eyes), severe stomach pains and diarrhea. About one in five persons with hepatitis A are hospitalized with three to five deaths resulting per every 1,000 cases. The good news is that the incidence of reported cases of acute hepatitis A virus is at the lowest rate ever reported (2005: 1.8/100,000 population)1. Today’s incidence is an 88 percent reduction over the 1995 rate.

What is Hepatitis A?
Hepatitis A is a serious liver disease caused by infection with the hepatitis A virus (HAV). HAV is a member of the Picornaviridae family meaning it shares similar physical and genetic characteristics of fellow family members, including poliovirus and rhinovirus (a common cold virus). Typical of viruses, HAV consists of a nucleic acid (single stranded RNA) and protein capsid (27 nm diameter). Although lacking the necessary components to multiply outside of a human host, the simple structure of waterborne viruses allows them to persist for long periods of time in the environment (three to 10 months in water).

The virus is shed in the feces of infected humans and spread to other hosts via the fecal-oral route, including the ingestion of contaminated water and food as well as person-to-person transmission, through fecal contamination of hands and surfaces, particularly in conditions of poor sanitation and overcrowding. Conventional municipal water treatment with chlorine is effective at inactivating HAV in water: waterborne outbreaks have been rarely documented in treated water supplies; however, experts estimate that a third of all Americans have been infected with HAV at some point in their lifetime, likely during childhood.

It is well known that reported cases of infectious disease are gross underestimates of true incidence as many people do not seek medical treatment for mild flu-like illnesses or self-limiting diarrhea. Therefore, a more accurate assessment of the true disease burden is often estimated using sophisticated mathematical modeling exercises. These models utilize known information such as environmental exposure data, virus-specific virulence factors and seroprevalence surveys (random testing of human blood or other fluids to evaluate the presence of viruses or immune-response markers) to calculate disease incidence in a population. Using this type of approach, the estimated acute total new infections of hepatitis A in 1995 numbered 356,000 with 31,582 reported cases.2 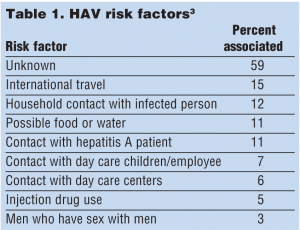 Several risk factors have been identified relative to HAV (Table 1). Those with known risk factors of HAV infection and persons with HIV or other hepatitis infection (hepatitis B or C) are encouraged to ask their physician about vaccination but the majority (59 percent) of infections continue to occur in individuals with no known risk factors. Infections are not distributed evenly in the US, where there is a disproportionate number in the western region.

Tracing the source of HAV exposure routes is complicated by the lengthy incubation period before the onset of symptoms (range: 15-50 days; average: 28-30 days). In addition, approximately 30 percent of adults and 70 percent of children infected do not present recognized, clinical signs of infection. The severity of illness increases with age. Illness typical resolves within two to four weeks and immunity is conferred, making HAV an ideal target for prophylactic interventions (i.e. vaccines).

Approaches to Eradication
The transmission route of HAV is fecal-oral, therefore humans are exposed via fecal contamination of food, water and surfaces (including hands). A multi-barrier approach is recommended to reduce the burden of HAV, focused on the use of:

Handwashing is the primary defense for humans against a variety of environmentally transmitted pathogens. Careful hand-washing, particularly after using the restroom, changing diapers and before food preparation is essential, as is improved hygiene and sanitation facilities for farm workers and food processors. Persons associated with food processing, from the farm to the table, should be educated about the importance of not coming to work sick, proper hand-washing and wearing disposable gloves.

Immunoglobulin shots after a known exposure can be effective at preventing the spread of HAV, but must be given within two weeks of the exposure event. They have limited, short-term effectiveness and one must recognize that they have been exposed and seek medical treatment. The best approach to prevention and long-term protection (>20 years reported), however, is the HAV vaccine, which has been available to the general public since 1995.

Several highly-effective vaccines are now commercially available for HAV prevention.4 Typically the vaccines are administered in two doses for people more than 12 months old. The second dose is given six to 12 months after the first. Combined vaccinations are also approved by the FDA for the protection of both HAV and HBV. Mild side affects include soreness/redness at the site of injection, headache and malaise; serious adverse reactions have not been reported. 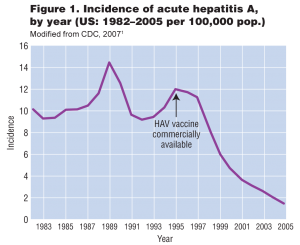 Since the availability of the HAV vaccine to the general public in the US, there has been an 88 percent reduction in the incidence of acute hepatitis A since the most recent peak in 1995 (Figure 1). Estimated total new infections in 2006 were 32,000 with 3,579 reported cases.2 The greatest declines in HAV rates occurred in states recommending routine vaccination in children; vaccine programs, historically, have been able to dramatically reduce future outbreaks and could potentially eliminate this disease completely.

Conclusions
Even though there have been dramatic reductions in HAV cases in recent years, it continues to be one of the most frequently reported, vaccine-preventable diseases in the US There is no cure for HAV infections. Patients are treated with supportive therapy for symptom relief and recommended to rest (for days to weeks) until symptoms subside. Although infection may lead to the complication of acute liver failure, there is no known long-lasting adverse health effect or long-term carrier state. Symptoms of fatigue, however, have been reported to last for months and about 10-15 percent of people report a relapse over a six to nine month period.3

Outbreaks of HAV continue to occur. Recently (2003), contaminated green onions imported from Mexico and served at a Pennsylvania restaurant resulted in an HAV outbreak where 640 people were infected and four died. Often in foodborne outbreaks it is difficult to trace the source of contamination given the wide range of potential routes of transmission from irrigation/rinse/processing water to field workers to food processors/preparers. Regardless of the environmental transmission route, hepatitis A is a preventable disease and the availability of HAV vaccines has resulted in a major, positive impact on public health.