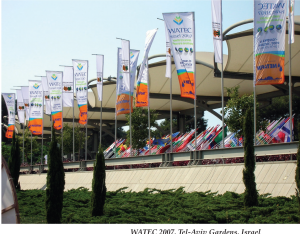 The objective of the exhibition was to create a global marketplace for state-of-the-art technologies relevant to the Israeli and international environmental industries in the fields of water and wastewater purification, reduction of environmental nuisances and alternative energy. A simultaneous conference was held which dealt with various water and environmental themes, such as the impact of global change on the economy, water resources management, water reuse, sustainability and environmental challenges in the developing world, international standardization in the field of water technologies, renewable energy, innovative agricultural technologies, water security and water loss management solutions.

Among the government ministers and leaders of industry that participated in the conference were the President of Industrial and Services Solutions, Siemens AG, Germany; the CEO of GE Water, USA and many representatives from the United Nations. Over 35 ministers and deputy ministers of water, energy, agriculture and economy from China, Australia, Brazil, Kenya, Hungary and Georgia also attended. 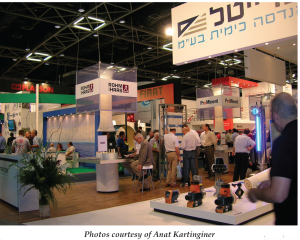 The exhibition and conference piqued the interest of the world. Thousands of visitors registered, including some 70 delegations from 80 countries. The WATEC exhibition was organized jointly by the Israeli Ministries of Industry, Trade and Employment, Environmental Protection and Foreign Affairs, as well as the Israel Export and International Cooperation Institute in collaboration with the Israel Water Commission and the Waterfronts-Israel Water Alliance.

Opening ceremonies
At the opening session, Gideon Ezra, the Israeli Minister of Environmental Protection, welcomed delegates and invited them to review the many available water technologies and environmental control solutions to environmental problems implemented in Israel and throughout the world. Throughout his speech, Ezra explained that Israel is located in an arid region of the Middle East where there is a severe water shortage combined with the ever growing pressures on water resources, densely populated urban areas and highly intensive irrigated agriculture. For these reasons, he explained, Israel placed wastewater treatment and reuse high on its list of national priorities. Today, the rate of effluent reuse in Israel for agriculture is among the highest in the world. Ezra also explained that the possibility of augmenting Israel’s water potential requires working in several directions; paramount among them is desalination on a large scale, including sea and brackish water. Mekorot (the national water supply company) has built and operated small- and medium-sized desalination facilities in the southern part of the country since the 1960s. Today, Israeli technology has the potential to desalinate much larger quantities of water and achieve high water qualities contributing to enabling unrestricted irrigation, together with effluent reuse, in accordance with soil sensitivity and without risk to soil and water sources. 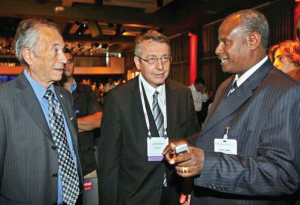 Israel NWETech
As part of the exhibition, the Israeli program NWETech (Novel Efficient Water Technology) was presented. Led by the Ministry of Industry, Trade and Labor, Foreign Trade Administration – Investment Promotion Center, its objectives were presented as follows:

The Israeli national water company
Water saving is in the country’s roots and the awareness of water scarcity issues is embedded in Israeli culture. Israel’s total water consumption has remained the same since the 1960s, in spite of a growing population, rising water requirements and increasing agriculture production.

Today, Mekorot reclaims 68 percent of its reused effluent for agriculture and treats 32 percent of the wastewater in Israel. The water company also transfers water from the lush northern region to the arid southern part of the country with a global pumping capacity of 72,000 m3 annually. In addition, the utility augments rainfall by up to 15 percent, manages 29 of the country’s 32 desalination plants and tests water quality via 200,000 different analyses annually.

Summary
At WATEC, company representatives met with over 70 delegations from around the globe, especially developing countries including China, India and Brazil, who were invited by the IEICI (Israeli Export and International Cooperation Institute) in cooperation with commercial attachés worldwide. Ministers from international governments arrived alongside journalists, opinion leaders and environmental experts.

Since its founding 60 years ago in one of the world’s most arid regions, Israel has regarded water availability as a national priority and has constantly developed novel and efficient water technologies. The country’s expertise was made available to the rest of the world at the exhibition, which is increasingly sharing similar concerns. Hosting the exhibition enabled Israel to create a global market place for successful technologies relevant to the international environment.

About the company
Tana Water has been a major force in the provision of drinking water systems for over 30 years and is one of the world’s most advanced developers and manufacturers of point of use systems. Leading-edge products are matched by a focus on customer service, which comes from long-lasting partnerships with clients. Visit the website, www.tanawater.com to learn more.

About the author
Anat Kartaginer is head of the Water Treatment Department at Tana Water, of Emek Haela, Israel. She is a member of the Israeli Water Association (IWA), International Ultraviolet Association (IUVA), European Point of Use Drinking Water Association (EPDWA) and a member of the WC&P Technical Review Committee. She can be reached at +972 2 990 0222 (phone); +972 2 990 0500 (fax); anat@tami4.co.il or through the company’s website http://www.tanawater.com.