Despite raging wild fires across seven California counties, members of the Pacific Water Quality Association convened at the Pechanga Resort in Temecula, California to celebrate 50 years of representing the best in water treatment.

Trial by fire
The final Board of Directors meeting under outgoing President Terry Heckman (GE Water & Process Technologies) voted to lower the annual basic dues amount to $365 (from $381) both to share the organization’s prosperity with the membership and to enable recruitment efforts to capitalize on the ‘dollar-a-day’ advantages of belonging to PWQA.

Wednesday, the intrepid golfers looked at the glow of the fires, steeled themselves against the occasional gusts of smoke and headed for the Red Hawk Golf Course. The traditional four-player scramble, sponsored by Culligan, had nearly 40 golfers participating. While no one managed to capture the prize offered for a hole-in-one on the eighth hole, a good time was had by all. The winners were as follows:

Back at the hotel, Ann Parissidi proctored WQA certification exams (many had taken Joe Harrison’s Water Treatment Fundamentals full-day course on Tuesday to ready themselves for the test).

General meeting
California Assembly Leader Joel Anderson had been scheduled to speak at the annual meeting held Wednesday afternoon, but with many parts of his district affected by the fires he was out helping constituents in every way possible. When he called to cancel, he was busily making hundreds of sandwiches for evacuees. The membership approved a bylaw change enabling the association to broaden its base in all Colorado River Basin states, where there is obvious comradeship within the water treatment industry facing increasing regulatory attempts.

Guests enjoyed the singing of Sid Fly, who then led the audience in the Pledge of Allegiance. Lobbyist Pete Conaty explained the political situation in California and encouraged all to get involved with the Adopt-A-Legislator program he has developed for PWQA.

Yours truly was inducted as President, having made the way through Chairs over the past several years. My Presidency begins on November 1. My remarks were as follows:

“I am honored to stand before you as PWQA’s new President. We are privileged to have with us tonight many of the men and women who built this organization and nurtured it through times of growth and prosperity—and through difficulties and challenges. 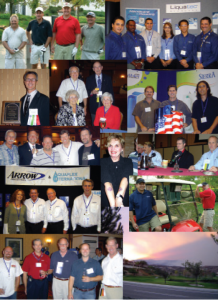 Very few undertakings reach the half-century mark—and fewer still are trade organizations. Tonight should rightfully be spent celebrating that rare accomplishment—but for a moment, let’s talk about the future.

If you check the Yellow Pages or search the Internet, you’ll find out that we, the members of PWQA, are in the minority. Water treatment companies who are NOT members of this august group outnumber us here in California—by about 10 to one. I ask for your help to begin to reverse those odds this year.

I know that’s a tall order, but these are perilous times—and there is strength in numbers. How perilous? You be the judge. During the past 12 months, there were constant threats to your ability to do business:

Every one of them has threatened your ability to do business during the past year, until PWQA board members, past presidents and rank-and-file members jumped in to reverse those attempts so you can continue to prosper.

Arizona and Nevada newspapers have both reported municipal discussions about those rising TDS levels and there have been a couple of articles that mentioned softener use in that regard. It does not take a psychic to predict what lies ahead.

Each time a challenge arises, PWQA stands firm on what our predecessors built: SB 1006 and AB 334. And I am sure many of you are thinking that those hard-fought legal protections must surely be enough.
They may be—but only through our vigilance. It is not the government that enforces those statutes; it is PWQA and its members, working to protect your rights.

Each and every time a challenge arises, members of this association rise to meet it. PWQA members educate legislators. We contact city attorneys and sit down with district leaders. We speak before city councils. We talk to the mayors and to the aldermen. We even talk to the city engineers. 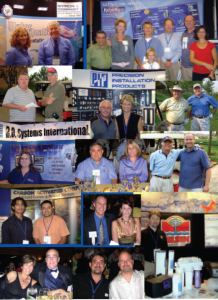 Most often, what we do is educate local governments about SB1006 and AB 334—the laws that preserve the consumer’s right to the best drinking water possible—and the right of our industry to provide it.
We go forth on your behalf no matter where we personally do business and whether or not there’s a paid member in a particular area. In fact, while there are many ways to view your trade association, education and law enforcement have been two of our main functions lately on your behalf.

Acquainting legislators with our business is our best long-term strategy, so that when challenges arise, we will have their support. Legislators with no real interest in this industry may have a significant interest in upholding the laws that ensure free enterprise or guarantee consumer choice, particularly when it comes to something as precious as drinking water. Those legislators need to make our acquaintance.

We head to Sacramento in March to do just that—and numbers speak loudest in the halls of government. A crowd shows commitment and strength.

This coming year, our Legislative Days will be more important than ever before, given the increasing and ongoing challenges raised here in California. You have all traveled to Temecula for this conference and celebration; I challenge each and every person here tonight to travel to Sacramento in March, so we can continue to celebrate in the years ahead.

I know it is difficult to get away from your businesses and harder still to bring family and staff members along. But I assure you, this challenge has a reward. Of course, the true reward is being able to continue to do business—but I have another, more immediate one in mind.
Join me in Sacramento in March—and I will buy dinner. It seems the state capitol has two very appropriate restaurants for us…so I’ll let you choose.

We can dine at Moxie in Sacramento—because it definitely takes moxie to be in this business in the west! Or—and I’m not making this up!—we can dine at The WaterBoy! If you doubted that you belong with us at this important event, surely that name shows you that it’s destiny!
Let’s start the next 50 years with a strong showing in Sacramento in March. I’ll see you there—and I’m buying.”

Thursday
Attendees had a choice of technical seminars for WQA credit throughout the morning, followed by business operations presentations in the afternoon. The sessions were scheduled so as not to conflict with the tradeshow hours—a design feature other conferences should definitely consider adopting. Nearly 50 vendors made the tradeshow exciting and informative; Raymond Gregory (son of Jerry and Dana Horner) delighted all attendees with his vocals and guitar playing.

That evening, PWQA executive board members donned black tie and formed a receiving line to welcome all to the improvised dining room. As the fires worsened, Pechanga became host to hundreds of evacuees forced from their homes by the inferno. The resort itself is owned by the Luiseno Indians and their reservation lands were burning. Pechanga staff rose to the crisis with grace and efficiency, managing to continue guest and business operations perfectly while creating housing for many hundreds of people; setting up emergency kitchens and bringing in Red Cross personnel, doctors and nurses to help those suffering from smoke inhalation or needing medications left behind in burning buildings.

After a wonderful dinner, the annual event really got underway, first with the presentation of association awards to deserving members. The Robert Gans Technology Award went to ResinTech’s Frank DeSilva for his commitment to sharing knowledge throughout the industry. Puronics and Topway Global each earned a Special Service Award for hosting membership barbecues during the past year. All rose in a standing ovation when C.F. ‘Chubb’ Michaud was given the prestigious Hall of Fame Award for decades of service in every aspect of the industry.

Then, the lovely Vanna (Morton Salt’s Ron Reuff) joined auctioneer Mark Smith (Smith Claims/West Valley Claims Service) to raise money for the PWQA PAC. Donated items ranged from a case of Bastard Ale (won by Bill Fritsche, who was not in attendance!) to a complete WQA Aquatech 2008 package with many fun and interesting items in between. Nearly $11,000 was raised by the winsome pair to the delight of all.

Friday, as WQA exams continued, the association’s Salinity Task Force updated members on activities and actions throughout the state. All were pleased to learn that WQA is working with other cities using PWQA’s “Pinch the Salt” outreach as a template. Developed with California’s Inland Empire, dealers work with their customers to upgrade older units and switch them to demand-initiated regeneration (or to portable exchange, if they prefer).

The tradeshow continued until afternoon, when vendors broke down their booths and headed home. Pentair, host of the ice cream social on the trade show floor, brought the remaining ice cream to the staging area for evacuees and gave out treats to all the children.

It was the fervent hope of all who attended that evacuees would find their homes safe and be able to return to them for joyous holidays.