Just as he had every other Saturday morning, Carlos Hernandez    sat at the kitchen table, eating the eggs his mother prepared. But he was frustrated that day: weeks had passed and still, he and his partners had not located a suitable hard residue to test in their research project. The team of students was searching for a hard material that could absorb lead pollutants in their local water supply. 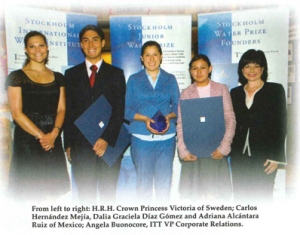 Hernandez was sure the material was at his fingertips—he was just overlooking it or not thinking hard enough. As he stared down at his plateful of eggs, suddenly an idea struck. Eggshells would be the perfect material!

He raced to the phone and spread the idea. With the majority in agreement, the team decided to run preliminary tests using the eggshells.

Months later, Hernandez and his teammates Adriana Alcantara Ruiz and Dalia Graciela Diaz Gomez were named the winners of the 2007 International Stockholm Junior Water Prize (SJWP). Their months of sleepless nights and meticulous research had paid off. They were awarded a $5,000 cash prize for their work and more importantly, acknowledgement of their tireless effort—the greater prize by far, according to the students.

Congratulations from queens and presidents
As Elin Weyler, the Manager of the International SJWP, called the three Mexican students’ names, their minds went blank. “We were kind of confused, we didn’t know what to do,” Ruiz said. “We forgot everything the producer told us in advance. So, we just put down our certificates and walked to the Princess.”

HRH Crown Princess Victoria of Sweden, the patron of the prize, graciously handed the team their award and told them, “Bravo!” That happy moment was the first of many congratulations from nobility, world leaders and members of industry.

The next day, the team received a phone call from Mexican President Felipe Calderon. He asked the winners about their project and along with his congratulations, President Calderon invited the team to Los Pinos (the Mexican equivalent of the US White House).

The attention was a bit overwhelming, the teens said; after all, just a few weeks before, they were together at home, completing their data analysis.

Focusing on lead pollution
Back in Mexico the previous year, the team determined that they wanted to combat lead contamination of local water sources. They’d recently read that their region was one of the top 10 most contaminated places for lead pollution. They knew that lead remediation was costly and that many companies were unwilling to support the clean-up effort due to a lack of political pressure.

Since lead pollution was not a priority, they pondered, a low-budget solution was vital. The team analyzed several eco-friendly and cost-effective materials for lead absorption capacity and ultimately—thanks to a home cooked breakfast—concluded that eggshells were the most effective remedy.

Becoming finalists, the trio conducted their experiments through their school and a state university, sending samples to the National Institute of Nuclear Investigation for analysis. They measured absorption levels of the eggshells when mixed in a liquid lead solution, determining how much of the lead content was removed. Using technical assays, including atomic force microscopy (AFM) and scanning election microscopy (SEM), the team was able to determine the percentage of absorption. Thus, the researchers were able to quantify the lead levels, lending to the credibility of the experiment.

In their rationale for the award, the judges explained why they chose the Mexican team out of 27 projects: they said the solution had clear industrial applications, was economically efficient and could be implemented today. “It’s really simple, that’s the genius of it,” finalist Gomez said. “It can be reproduced tomorrow.”

Hard work pays off
In addition to their scientific efforts, the Mexican team also battled a language barrier. Although they’d successfully competed against 92 other Mexican projects to come to the international competition, their work was far from over. Their paper and presentation had to be translated into English in just a few short weeks, which proved to be a major test of the trio’s persistence and patience.

Forgoing food and sleep, they worked late into the night to complete their translations. “There was a week where we were going to sleep each night at two or three a.m.,” Ruiz said. “We would go to someone’s house, work all night, sleep for an hour or two and get up for school the next day. We were like zombies.” With no time to go home and change, they went to school in the same clothes from the previous day.

Confidently starting college
In the end, those sleepless nights and rumpled mornings were worth it. As the three head for university this fall, each said they were convinced they could do anything. “We have the personal motivation to do whatever we want to do,” Gomez said. “We got to see and experience incredible results for all of our hard work. And besides, how pleasing that’s been for us, personally; it all goes to motivation not just for us, but for other young students here in Mexico.”

Attending different schools, the trio is determined to continue their research together. They hope to explore other metals and other pollutants. One of the judges of the competition expressed an interest in continuing the team’s research in her own laboratory in Colombia. “We’ll be staying in touch with her,” Gomez said. “She wants to look at chromium, another heavy metal.”

Hernandez’s eyes gleam; he is already considering this next project. These students are excited and driven, eager to change the world. Being only in their late teens, they may do just that.

About the author
Laura Mirviss, a high school student from Potomac, Maryland, was the 2007 winner of the ITT Award for Excellence in Student Water Journalism. For her award-winning article about lead, she and a faculty advisor received an expense-paid trip to Stockholm, Sweden to attend the 2007 Stockholm Water Symposium. She also received $1,000 for publishing an article about the event in a trade journal. Here is her report on the Stockholm Junior Water Prize, which ITT has sponsored for the past 11 years.