Back From The Brink

Afellow speaker at an ion exchange conference in Cambridge, England back in 2000 stated that after 50 years in ion exchange academia, he was retiring. In announcing that impending event, he paralleled his career with the life cycle of the ion exchange industry. That is, he implied that ion exchange was born in the early 1950s when he began his career, enjoyed 50 good years of success and was passé by 2000. Boy, was he ever wrong!

Today, there are many applications for which ion exchange may never be replaced and they are increasing in number. 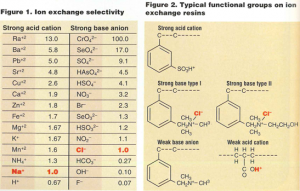 A look back
Historically, the discovery of the ion exchange process is credited to Thompson and Way who, in 1858, determined that certain soils (containing zeolites) could exchange one ion for another. When ammonium salts (fertilizers) were added to a pot containing planting soil, the ammonium ions were captured by the soil and calcium and other salts came out the bottom. Today, this is easily explained because most soils are cation exchangers.

The modern ion exchanger was born in 1940 when a researcher successfully sulfonated a crosslinked polystyrene bead to produce a strong acid cation exchanger. The real discovery was not the sulfonation process; that had been done for almost 50 years. The discovery was in the process of manufacturing the styrene/di-vinylbenzene bead that has since become the backbone of the modern resin.

The mid-1940s were the ‘pre-school’ years for ion exchange. Many new resins were being developed and the discovery of what they would actually do was in full swing. Much was still unknown at this point. These new ion exchangers could exchange sodium for calcium (softening) and could function well in the H+ form (something natural zeolites could not do well). The birth of the strong base anion resin made complete de-mineralization possible for the first time (including the removal of silica).

The 1950s were the ‘teenage’ years for the ion exchange industry. New applications were being created and demineralized water, previously unattainable other than through multiple distillations, was now commonplace, thanks to ion exchange technology. Much research accurately defined the selectivity of the ion exchange reaction leading to advances in metal refining through chromatographic separation and recovery. Pretty much anything Mother Nature had put into water, ion exchange was capable of removing. This opened many new doors for water purification and chemical processing.

Most of the standard resins (i.e., the strong acid, strong base, weak acid and weak base) were fully developed by the mid-1960s. The 1970s saw the re-invention of ion exchange, brought about by the escalation of energy and raw materials pricing. Prices rose dramatically and new processes were sought for cost reductions. Batches got larger. Plants became more streamlined. The 1980s and 90s were the ‘adult’ years with few new developments. Foreign competition made inroads, but was slow to be accepted.

Ion exchange today
Today’s ion exchange industry is truly a global business. Most ‘domestic’ producers of resins also operate or import from offshore sources. Ion exchange is also a very mature business. There are few secrets in the manufacture and use of resins that would tie an end user to a single resin source.

Ion exchange products are more popular than ever as new and lower limits for water contaminants such as arsenic and perchlorates are legislated. Ion exchange shows a very high selectivity for uranium and radium and can be used very effectively for boron, selenium and most heavy metals. Common applications where ion exchange excels are for the reduction of nitrates, sulfates, alkalinity and hardness via salt regenerated systems. Even sodium can be reduced using potassium chloride to regenerate a softener and if the water analysis is just right, fluoride and ammonia can be reduced with salt regenerated ion exchange systems.

What has always made ion exchange unique is its ability to selectively reduce offending ions. Unlike reverse osmosis (RO) which acts on the total feed water and does its work based on water volume, ion exchange processes all the water but does its work solely on the ions that have been selected to be removed.

Changes in manufacturing
Polymeric adsorbents, a form of ion exchange bead, have replaced granular activated carbon in some areas due to their ability to more effectively remove certain organics with higher capacity and regenerability. Copolymer beads, the un-functionalized backbones of ion exchange resins, are even used as ‘lubricants’ in drilling muds to reduce the friction between the drilling bit and the strata (if you have ever stepped on a spill of resin, you will appreciate this).

Most of the advancements in modern resins lie in the discoveries of how to better manufacture the products. Ion exchange resins sell for about the same price today as they did in 1980, even though raw materials, energy and labor have all increased dramatically. Modern manufacturing is cleaner, more efficient, makes larger batches, produces a tougher, more uniform product and is less costly than 25 years ago.

Despite the fact that there is less research on ion exchange chemistry, there are tremendous advances in application such as counter-flow systems, packed beds and disposable high-purity mixed beds. Ion exchange systems can be made smaller and cheaper because the newer products can take higher pressures, temperature and flows. New methods for functionalizing cation resins have led to the development of the shallow-shell technology that saves salt and water for softeners. Hybrids incorporating ion exchangers with ferric hydroxide have created cleaner, higher capacity products for selective arsenic reduction and multi-functionalized anion resins show extreme selectivity for perchlorate remediation.

New applications
When the bio-diesel industry needed an agent to remove leftover water, glycerin and alcohol from transesterified bio fuels—what else?—the unique water holding properties of ion exchange resins were brought into play. The same resins can also scavenge water out of a tank of gasoline. Ion exchangers can disinfect water by adding iodine and then be employed to remove residual iodine and the iodide salts that may have formed. This technology is currently used aboard the NASA shuttles that zip in and out of orbit.

Ion exchange plays a major role in the production of corn syrup, sugar, wine and juice clarification and de-bittering. Ion exchange is used in the pharmaceutical industry where it is incorporated into certain drugs and used in tablets to help disintegrate them. Ion exchange makes possible the reclamation and reuse of metal-plating chemicals and rinses and will, no doubt, play a key role in the recycling of household waste water (when the time comes); it will certainly find utilization in polishing of desalinated sea water.

The future of ion exchange
Despite its sterling past and golden future, ion exchange may eventually yield to alternative technologies for the home water softener (although there are no such alternatives today). The pressure to eventually reuse and even recycle household and industrial waste water is increasingly calling for the elimination of the salt discharge from existing softeners. Ion exchange brine discharge is also being falsely accused of disrupting the actions of septic systems (although there is a plethora of solid research to show otherwise). So here’s to the next 50 years! Back from the brink? It was never there.

Just as the producers of new chemical products can put new twists on old chemicals for new uses, the manufacturers of ion exchange products can put new functionality on old resin backbones to produce new products. These new products are being used for the selective removal or isolation of metals, chemicals and even proteins. New resins are more efficient due to more uniform particle size, functionality distribution and porosity. They do the same jobs better and cheaper than even 10 years ago. Ion exchange has entered a new age of discovery and application and will be with us well into the new millennium.

About the author
C.F. ‘Chubb’ Michaud is the CEO and Technical Director of Systematix Company, Buena Park, Calif,, which he founded in 1982. An active member of the Water Quality Association, Michaud has been a member of its Board and of the Board of Governors and past Chair of the Commercial/Industrial Section. He is a Certified Water Specialist Level VI. He serves on the Board of Directors of the Pacific WQA (since 2001) and Chairs its Technical Committee. A founding member of WC&P’s Technical Review Committee, Michaud has authored or presented over 100 technical publications and papers. He can be reached at Systematix Inc., 6902 Aragon Circle, Buena Park CA 90620; telephone (714) 522-5453 or via email at cmichaud@systematixUSA.com.