By Joseph A. Cotruvo, Ph.D. and Houssain Abouzaid

Desalination, water reuse and conservation are the principal sources of ‘new water’ in a world where many areas are in need of greater access to fresh water for improved health, quality of life and economic growth. More than 12,000 desalination plants are in operation throughout the world, producing about 40 million cubic meters (roughly 10 billion US gallons) of water per day. About 50 percent of the capacity exists in the west Asia gulf region; North America has about 17 percent; Asia apart from the gulf about 10 percent; north Africa and Europe account for about eight and seven percent, respectively and Australia somewhat over one percent. The desalination market is predicted to grow by 12 percent per year to 2010. Capacity is expected to reach 94 million m3/day (24.8 billion gpd) by 2015. Desalination plant sizes and designs range from more than 1,000,000 m3/day down to 20 m3/day; home-sized reverse osmosis (RO) units may produce only a few gallons per day. Over the next 10 years, at least US $100 billion for desalination is projected to be needed in the Arab states alone, just to keep up with economic growth and water demand, according to a 2006 report.

The WHO Desalination Guidance was initiated by World Health Organization’s (WHO) Eastern Mediterranean Regional Office (EMRO). Desalination facilities have been developed over the last ~50 years on virtually an ad hoc basis under a variety of governmental and public health authorities and environmental quality specifications. WHO guidance on health and water quality and environmental quality aspects should facilitate the installation of new facilities and also the upgrading of existing facilities by providing guidance on design and siting issues, universally acceptable quality goals and practical operating considerations. Guidance issues include: drinking water quality, blending water quality, aesthetics and water stability; nutritionally desirable components; direct and indirect additives; process performance and water quality monitoring; environmental protection factors. WHO Desalination Guidance is available for free download and public comments at: http://www.who.int/water_sanitation_ health/gdwqrevision/desalination/en/index.html_.

Organization of the guidance
The guidance development process was inclusive of all of the the international and technical perspectives and experience that exist in this highly developed field. The technical committee included more than 35 worldwide experts with engineers, scientists, water suppliers, academia, public, international agencies and governments involved. The topics and chairs were as follows:

Aesthetics and water stability
Aesthetic factors like taste, odor, turbidity and total dissolved solids (TDS) affect palatability and thus consumer acceptance and, indirectly, health. Corrosion control and hardness and pH have economic consequences and they also determine the extraction of metals and other pipe components during distribution. Stabilizers and blending are used to adjust these parameters.

Blending waters
Blending increases the TDS and improves the stability of finished desalinated water. Contaminants in the blending water can also affect the quality and safety of the finished water because it may not receive any further treatment beyond residual disinfection. Some contaminants are best controlled by pretreatment of the blending water.

Nutritionally desirable components
Desalinated water is essentially synthesized water and must be stabilized by adding lime and other chemicals. Other components can be added to produce water of any desirable composition. Drinking water cannot be relied on to be a significant source of minerals in the daily diet, but there is a legitimate question as to the optimal mineral balance of drinking water to assure quality and health benefits. Total dietary calcium and magnesium are important health factors, as well as certain trace metals and fluoride is also considered to be beneficial for dental health.

Chemicals and materials (direct and indirect additives)
WHO and this WHO Desalination Guidance encourage governments to establish systems for specifying the appropriateness and quality of additives or to adopt existing credible recognized standards for those products that would be tailored to desalination conditions.

Environmental quality and environmental impact assessments
Like any major project, desalination plants can have significant effects on the environment during construction and operation. Procedures and elements of Environmental Impact Assessments (EIA) are provided in the guidance to assist project designers and decision makers to anticipate environmental concerns including: siting, coastal zone/marine protection regarding withdrawal and discharge, air pollution from energy production and consumption, groundwater protection from drying beds, leachates and sludge disposal.

Some of the factors that distinguish desalination from most drinking water operations include: 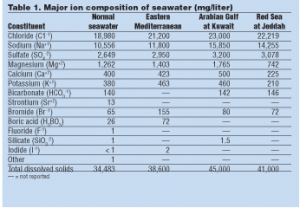 Table 1 is a summary of the typical mineral composition of sea waters. Brackish water contains lower amounts of salts. Special technologies are required to convert these waters into safe and potable drinking water.

Acknowledgements
This commentary is based upon the draft of the “WHO Desalination Guidance” and does not necessarily represent the policy of WHO. It was also drawn from a paper presented at the Environment 2007 Conference in Abu Dhabi, UAE. Both documents contain the appropriate citations. WHO especially wishes to acknowledge the organizations that generously sponsored the desalination guidance development process. These included: the AGFUND, The Kuwait Foundation for the Advancement of Science (KFAS), the US EPA’s National Risk Management Research Laboratory (Cincinnati, Ohio), the American Water Works Association Research Foundation (AwwaRF) Denver, Colo., USA, The Water Authority of the Cayman Islands, The Bureau of Reclamation (Denver , Colo., USA) and the National Water Research Institute (NWRI, Fountain Valley, Calif., USA). The project was also substantially funded by WHO EMRO. We gratefully acknowledge the expertise and in-kind services provided by all of the expert participants without which it would not have been possible.

About the author
Dr. Joseph Cotruvo (corresponding author) is President of Joseph Cotruvo & Associates, Environmental and Public Health Consultants, Washington, D.C. USA. His Ph.D is in physical organic chemistry. He was Director of the Drinking Water Standards Division and the Toxic Substances Risk Assessment Division during his almost 25 years of service with US EPA. He currently works extensively on drinking water quality, desalination, water reuse and water delivery systems and health science issues. Cortruvo also serves on several World Health Organization panels and on research panels with the NWRI and the WaterReuse Foundation. He is a member of the Agua Latinoamérica Comité Consultivo de Asesores Téchnicos and Vice President of AIDIS USA. You may contact him by phone/fax: (202) 362 3076 or email: joseph.cotruvo@verizon.net.