By Zoe A. Grosser Ph.D. and Kenneth Neubauer Ph. D

Water for public consumption must be purified prior to distribution or bottling. Chlorine is commonly used for disinfection, but may create hazardous disinfection by-products, depending on the residual organic content of the water supply. Treatment with ozone is another disinfection alternative. While this method is effective, ozonolysis can also convert bromide (Br–), a natural component of many waters, into bromate (BrO3–), a carcinogen. Therefore, the need exists to measure bromate in drinking waters, which means that it must be measured separately from other forms of bromine. In addition, each form is usually present at low concentrations. Current methods for measuring bromate and bromide involve separating the bromine-containing components by liquid chromatography (HPLC) and using inductively coupled plasma mass spectrometry (ICP-MS) as a detector. This is the protocol stated in US EPA Drinking Water Method 321.8. Bromate at 10 mg/L (parts-per-billion) in drinking water has been regulated in the US since 1999. The US FDA has adopted the same standard for bottled water exposed to ozonation for disinfection. Similar levels are regulated in Europe for a variety of water types.

Primary drinking water contaminants are generally measured by a single technique, such as HPLC or gas chromatography for organic components and ICP-MS for inorganic components. The use of a combined technique for inorganic speciation has only recently become routine and is still rapidly advancing in developments devoted to speed and ruggedness.

Challenges in developing speciation methods
Development of a speciation method requires two types of expertise. The chromatographer is best skilled for development of the separation portion of the procedure, while the inorganic analytical chemist is best suited for optimizing the detection system, in this case ICP-MS. Each area of expertise has a separate ‘language’ and knowledge of aspects that are important in their portion of the analysis. Bridging the gap is key to creating the best method for analysis. For example, chromatographers must consider minimizing the use of glass, organic solvents and the total dissolved solid content of the mobile phase. All of these areas do not need to be considered for ‘normal’ HPLC analyses, but can cause problems for inorganic detection (i.e., glass is dirty with respect to inorganic elements and glass components can therefore contaminate a system leading to false high results). ICPs do not handle highly organic solvents very well under normal sample introduction conditions, although modifications can be made to accommodate samples with high organic content. Finally, high total dissolved solids (TDS) can deposit on various components within an ICP-MS, leading to drift over time and frequent maintenance.

The inorganic chemist must also have proper expectations about HPLC method development, which is more complex and time consuming than development of an ICP-MS method. Important variables include the mobile phase composition and various column characteristics, such as packing material, particle size and length. The method development involves real chemistry and may take weeks!

Recent advances in bromate measurement
Since the development of US EPA Method 321.8 in 1998, advances in speciation have taken place, allowing the method to be improved for ruggedness and speed. 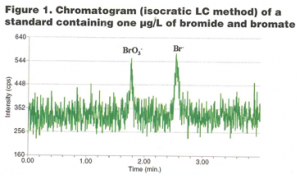 Figure 1 shows a chromatogram of 1g/L of bromate, showing that even at very low concentrations it can be distinguished from the background levels.1

Note that time for analysis is less than three minutes, whereas the Method 321.8 chromatographic separation takes eight minutes. Figure 2 shows overlaid chromatograms of a Chinese bottled water analyzed 49 times over the course of several hours to examine the short-term 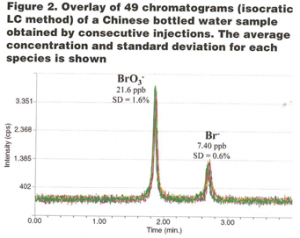 precision, which is better than two percent.

For a few samples with asymmetrical peaks and high bromate values, additional method development was done to ensure the analyte of interest was adequately separated from any other components that might mistakenly contribute to the bromate measurement. A gradient HPLC method, although slightly longer than the isocratic method developed for routine use, showed several peaks overlapped the bromate peak in some samples.2 Advanced interference correction on the ICP-MS showed that the additional peaks did, in fact, contain bromine. Their identification was not investigated further. Figure 3 shows the chromatogram for a bottled water purchased in Thailand showing the additional peak, uncovered with the gradient separation method. 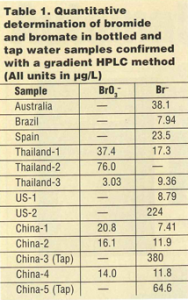 Table 1 shows the concentrations of bromide and bromate for a variety of bottled and tap water samples. The samples with suspect peaks or bromate concentrations above the regulatory limit were confirmed with the developed gradient HPLC separation to ensure that only one peak was present at the retention time expected for bromate. 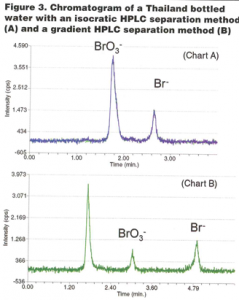 Summary
Speciation development continues in this improvement of existing methodology. The separations are accomplished in less than three minutes and proved to be repeatable from injection to injection and over several days. For those waters containing additional bromine-containing species, a gradient HPLC method was established. Taken together, the isocratic separation scheme can serve as a rapid screening method; those samples which contain additional bromine species can then be confirmed using the longer gradient method.

It is interesting to note that not all countries regulate or enforce bromate at levels considered safe in the US. Although bottled water may contain less bacteria than tap water outside the US, it may not contain safe levels of disinfection by-products (DBPs) such as bromate.

About the Company
PerkinElmer PerkinElmer, Inc. is a global technology leader focused in the following businesses: Life and Analytical Sciences, Optoelectronics and Fluid Sciences. Combining operational excellence and technology expertise with an intimate understanding of its customers’ needs, PerkinElmer creates innovative solutions – backed by unparalleled service and support – for customers in health sciences, semiconductor, aerospace and other markets whose applications demand absolute precision and speed. The company markets in more than 125 countries and is a component of the S&P 500 Index. Additional information is available through www.perkinelmer.com or 1-877-PKI-NYSE. PerkinElmer Life and Analytical Sciences at 710 Bridgeport Avenue, Shelton Conn. 06484 USA manufactures the PerkinElmer Series 200 HPLC and ELAN® DRC™ II ICP-MS, using Chromera™ software, the measuring devices used for this research.

About the author
Zoe Grosser, Ph.D. is Segment Marketing Manager, Analytical Sciences of PerkinElmer Life and Analytical Sciences. She has been with PerkinElmer for more than 20 years, having held a variety of marketing, product development and product support roles. Prior to joining PerkinElmer, she was an analytical problem solver at American Cyanamid. She obtained a doctorate in analytical chemistry from Northeastern University and holds a Master’s in business administration/marketing from the University of Connecticut. Grosser can be reached via email at Zoe.Grosser@perkinelmer.com or telephone: 203-402-5320.