Alpine Softener Corporation was organized in 1963 by Merlin McNames in Belvedere, Illinois as an exchange tank business. Richard Leatherby moonlighted with McNames while working at Sears and raising a family of six. In one short year, Leatherby expanded sales to include automatic units. By 1967, the two men covered the areas of Belvedere and nearby Rockford. Leatherby’s son Andrew began working for the company in 1975, hauling bulk salt and cleaning out brine tanks. Starting at the bottom and climbing up the ladder, he learned every aspect of the business. When Richard decided it was time to retire, Andrew bought the business and decided to run it the same way his father had. “No sales people, just the best product at an affordable price with superior services,” he said.

Andrew’s son Cliff has since joined the company, making it a three-generation, family-owned and operated business. He has a definite understanding of the difference between family-owned companies versus big corporations. Sue, Andrew’s wife of 27 years – mother of Cliff and Heidi – took over management of the office after the children were grown. A former Illinois Bell long distance operator, she handles the phones and everything else with ease: appointments, price quotes, whatever needs to be done. A breast cancer survivor, Sue doesn’t give up and inspires everyone with her strength. Melissa Brown is the newest employee. She is being trained by Sue to take over the office duties in the near future. A recent changeover to computerized bookkeeping was a big challenge for the company. At the same time, Charlotte Fowler and Pauline Williamson, both 25-year Alpine veteran employees, left the firm for retirement. “Any major changes cause heartaches,” said Andrew Leatherby, “It was hard to see them leave after all those loyal years of service.”

Hans Winkler is the in-house engineer who rebuilds and designs equipment. “He can service and repair most any controller on the market. Depending on what type of service orders come in, he will typically work on anywhere from one to eight controllers per day,” Andrew proclaimed. Installer Tony Acardo (also known as ‘Hyper-Rooster’) has been with the company for 18 years. He manages all service and installations and does all of the outside work. Although retired, Richard Leatherby stops in to check up on the business. He always says, “I don’t want to slow anyone down or waste your time,” to which Andrew replies, “Please slow us down and give me a hug!”

It’s a niche company that custom builds water treatment systems from the ground up, one at a time, while competitors must stock and re-sell units as orders come in. Water softener equipment, Iron Curtain units and purification systems generate the strongest sales. The company now serves a three-county area, including some Chicago suburbs, with two full-sized cargo vans outfitted for installations, service and salt deliveries. Each truck has the capacity to hold one skid of salt weighing 2,350 pounds (1065.94 kg). The company also handles a large portion of commercial water treatment applications for local car washes, restaurants and brine recovery systems for industry. All referrals come by word of mouth. Local plumbers and builders recognize the firm’s success and regularly call on Alpine. They, too, know the value of a satisfied customer. The company maintains an Internet Yellow Pages entry but hasn’t yet created a website. That’s a project for the future.

“Our success comes from not being so big that customers become a zip code or are put on hold waiting for help,” Andrew says. “We solve problem water and know how to resolve the issues. If we make a mistake, we are all held accountable and learn from it. We are very honest in the way we conduct business. We have a standard of conduct: be ethical and have integrity in all that you do. This is something everyone recognizes but few competitors adhere to. If you are always looking for the big payoff, it will destroy you. If you are humble about what you have and where you are going, you gain peace of mind.” 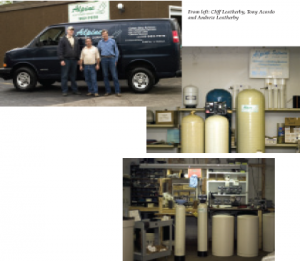 In the next few years, the company plans to expand into a new commercial market: RO maintenance for car washes and cooling towers. Resale of water softeners at local hardware stores is also being considered. “When it comes to bottled water, the market is flooded with companies who go to great lengths to outdo each other and that’s something we don’t want to do,” Andrew said. “We are thankful for everyone who has helped us grow over the years and we look forward to the many challenges ahead.”