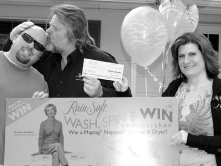 Nolte named RainSoft winner
Mike Nolte of Thornton, Colo. was the winner of one of three grand prizes in RainSoft’s national Wash, Spin & Win contest and was eligible to receive a Maytag Neptune washer and dryer or cash. Nolte at first thought the call from Peter Waelti, President of RainSoft of Denver, was a prank. Over 100,000 entries from across the nation were received. The other winners were from Ohio and Wisconsin.

Mike Gaughan has rejoined Watts Water Technologies, Inc. as the Western Regional Manager-Automatic Control Valve Group. He has nearly three decades of experience working with pipe, valves, fittings and instrumentation in the water, plumbing and industrial markets. Gaughan will be responsible for further strengthening the company’s relationships with regional wholesale customers, engineers and municipalities while assisting in the development and implementation of long term sales initiatives. Based out of southern California, he will cover the western United States.

Neil Desmond, Senior Vice-President and General Manager of Pentair Water’s Fluid Solutions Group, received WQA’s President’s Plaque at WQA Aquatech USA 2007 held in Orlando, Florida. The award was given in recognition of his 2006-2007 term as President of the international trade association, where he has served on the Board of Directors since 2003.

as Western Regional Sales Manager for its Purlogix division and Mark Holsclaw as Northeast Regional Manager for the Pure Water Technology® division. Wyble brings over 30 years of sales and customer service experience to the position.

Holsclaw will be responsible for all dealer sales and training as well as dealer recruitment in his region. He has over 25 years of sales/management experience and is a graduate of the University of Louisville (Ky.)

Dr. Ruediger Knauf was appointed Director of Siemens’ Global R&D Center in Singapore. He joined the company in 2000 and was most recently the Director, Corporate Technology. Knauf has held several positions in process development, engineering and R&D including Director Engineering Industrial Infrastructures. He received a Masters Degree in chemical engineering from Technical University Clausthal-Zellerfeld/Germany and earned his Ph.D. in membrane technology at Technical University Aachen/Germany.

Tashjian appointed at Atlantium
Atlantium’s Travis Tashjian is now Vice President of Sales in North America.  Formerly with Bioway Technologies, he has over 18 years of experience in both municipal and industrial segments of the water treatment industry. Tashjian will be based in Cincinnati, Ohio.

Howard Wheater, Professor of Hydrology at Imperial College in London, UK, was recognized for his global efforts with the Prince Sultan International Water Prize for 2004-6. His projects include organizing the International Workshop on Groundwater Modelling for Arid and Semi-Arid Areas in Lanzhou, China; co-chairing UNESCO’s G-WADI (Water and Development Information for Arid Lands – A Global Network) water program and introducing the use of distributed, physically-based modelling of rainfall-runoff processes for the first time in the Arab region.

Halo Source, Inc. named Andrew Clews as Vice President of Marketing and Business Development with a primary focus on growing the firm’s global drinking water products business. He will lead the company’s global marketing and branding strategies, product management, public relations, partner alliances and commercialization of clean water and infection control products. In addition to post-graduate studies in international business and marketing, the native New Zealander earned a BA in political science from the University of Auckland and has extensive experience in the Asian, Australasian and North American markets.

Dosmatic U.S.A./International, Inc. announced the appointment of Pascal Brusset as Sales Manager for Southern France and Italy. He will serve and support Dosmatic Europe’s existing distribution network for his territory and further develop sales in these markets. Brusset previously worked in the French market for a chemical company specializing in detergents and electrical dosing systems for electro-mechanics. He has degrees in business, marketing and industrial mechanics.

AwwaRF appointees named
The Awwa Research Foundation (AwwaRF) named Jill Estabrook Wisehart as Director of Communications & Marketing, Sean C. Lieske as Senior Account Manager and Shonnie Cline as Project Manager. Previously with the cable and satellite industry, Wisehart will spearhead communications, marketing and brand positioning for the foundation. Lieske bring 14 years of environmental industry experience to the position and will support a variety of member utilities across the US. Cline, previously the City of Brighton (Colo.) Storm Water Coordinator, earned a BS Degree in purchasing management from Arizona State University and a BA Degree in biology from Metropolitan State College of Denver (Colo.).