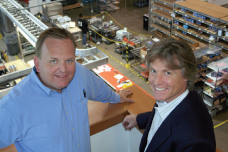 Ozone might rightly be called the least-known of current water treatment technologies. For every individual who knows something about it, there are probably half a dozen others who are still unfamiliar with its use. That’s changing every day, in no small part because of the work of Brian Johnson (CEO) and Chris Rombach (President) of Pacific Ozone Technology, Inc. (Pacific Ozone).

Patent and pedigree
The firm (known then as Pacific Technology) was founded by Peter Landgraf, inventor of a proprietary corona discharge reactor cell, the patented Floating Plate Technology ™ (FPT™). What makes the design special is its ability to produce highly reliable, efficient ozone generation, in cost effective, air-cooled systems.

In 1996, Brian and Karen Johnson acquired the company, including all the patented technology. The Johnsons realized that the FPT™ design meant ozone could go where it had never gone before – applications that had been either unrealistic or impossible due to cost, or weight, or location – could be approached with confidence and ease – and with complete success. “I had the good fortune of being involved in pioneering other successful businesses by that time.” Johnson said, “Peter made me aware of the budding ozone market and it was easy to recognize ozone’s huge potential. When the opportunity arose for my wife and me to make the investment, we didn’t hesitate to contribute to the emerging ozone industry.”

Chris Rombach was a product manager at the largest distributor for Pall Corporation for eight years when he became President of Stedim Biosystems, a manufacturer of bioprocessing equipment. Convinced that it was time to grow beyond the purification answers of yesterday and move into the future – a future where a green technology can accomplish disinfection – he joined Pacific Ozone as President at Johnson’s invitation. “Energy use with ozone is minimal in comparison to the disinfection accomplished, “ he said, “ It is truly a green technology and industry is finally ready to adopt it fully.”

Both gentlemen are responsible for that paradigm shift. The result is that today, Pacific Ozone is the world’s leading supplier of air-cooled, corona discharge ozone generators, integrated ozone/oxygen systems and process controls – and it is growing all the time. At the close of last year, they launched Element Ozone, a sister company that supplies ozone technology for light commercial and consumer applications. Element Ozone has worked with its partner to package revolutionary ozone technology into small and complete ozone systems and appliances that fit in simple counter-top and portable units that are taking the restaurant industry by storm. “It puts industrial-strength disinfection and sanitation technology into the hands of food service operators,” Rombach summed up.

Applications great and small
Pacific Ozone’s products include a broad range of ozone generators – those that generate as little as 0.5 to more than 50 pounds of ozone per day (the O,G,SGA, SGC, M and Lab Series) and offers complete integrated ozone contacting systems (the ICS and IOCS Series). The latter are designed to address most industrial requirements; unique requirements receive special application and product development from a team of engineers and technical experts. Field service and on-site system commissioning are standard aspects of the firm’s commitment to complete customer service.

“We are also serving new ozone users in inventive ways,” Johnson explained, noting that the company is increasingly focusing on integrated contacting systems. “We work with customers to develop systems that meet the very specific needs of their individual applications.”

These skid-based systems include all of the critical components of ozone generation and contacting: feed gas preparation, ozone generation, and ozone contacting and system control. For the user, the complete package offers easy integration and simplified application.

Living a credo
The company is not content to simply rely on its technological expertise, however. Johnson and Rombach want to make customers for life. “It’s a core value for us, “the CEO explained. “It drives the behavior of each and every associate,” the President added.

That foundation gives rise to superior performance at every level and encourages innovation in unexpected directions as well. “Worldwide, there are places that truly need ozone for disinfection, but dollars are precious and funds are limited. We’ve developed a used equipment division – also factory warranted – that enables such areas to bring ozone to potable water treatment,” Rombach said.

Making up for lost time
Ozone has been known for over a century – but consumer lack of knowledge is still a factor because for much of those years it was rarely used due to the breadth of chemical disinfectants developed during the early 20th century. Chlorine-based compounds have held a leading role in water disinfection for many years, and remain the logical choice for residual protection. Ozone is proving to be a useful in a variety of processes and industries as an adjunct or replacement for chlorine, and other chemicals, as well as steam and hot water. “It’s both incredibly powerful and a natural ‘chemical’ – it’s the triatomic version of oxygen, and that third atom is rather weakly attached to the 02 molecule. A tremendous amount of energy is released when that bond is broken,” Johnson explained.

The reaction breaks down cellular RNA and DNA, demolishing the cell walls into simpler carbon chains not recognizable as the former organism. Disinfection via total destruction.

“In the past decade, technology, experience and the need for ozone have converged,” Rombach said, adding that this is just the beginning for ozone applications.

Johnson explained that he relishes the role of pioneer. “Every day, we have the opportunity to overcome new challenges, find new solutions, evolve to serve a new application or market sector. It’s incredibly exciting as well as totally satisfying.”

What the next ten years bring to Pacific Ozone Technology, Inc. is bound to be equally interesting, as ozone is being used in industries where it was never imagined before. “Growth continues, “ Rombach said, “and opportunities abound.”