The term ‘active agent’ sounds like something from a favorite television thriller involving government operatives and complex plots. While active agents used in drinking water treatment may not be quite as exciting as a television show, there are some interesting details relating to certification of these products.

Definition and levels
NSF/ANSI Standards 42 and 53 define an active agent as a substance or medium added to or involved in the treatment process that requires direct or sacrificial release of the agent or degraded product to reduce specific contaminants in water. Silver, copper and zinc are the most commonly used active agents; NSF routinely certifies drinking water treatment systems containing silver impregnated carbon and zinc/copper media. Silver is most frequently used in the form of silver impregnated carbon, with the intent to be an antimicrobial. Copper and zinc are usually in the form of a metallic redox media that can also have antimicrobial properties.

NSF/ANSI Standards 42 and 53 require that products not release active agents into product water at levels of toxicological significance. Table 1 contains the limits given by the USEPA Primary or Secondary Drinking Water Regulations for silver, zinc and copper concentrations in treated water.

tions be used because by definition, active agents are intended to be sacrificially released into the water for a specific purpose.

NSF/ANSI Standards 42 and 53 require collection of product water samples for the analysis of active agents according to the performance test procedure that is likely to result in the highest potential extraction of the active agent. The test protocols suggested by the Standards as being likely to result in high concentrations of active agents are chorine reduction or bacteriostasis. Only complete systems (not components) undergo this evaluation, because the release of active agent into the water is highly dependent on system configuration and flow rate.

The performance tests for chlorine reduction and bacteriostasis are described in detail in the following section. Since the active agent analysis is conducted in conjunction with either of these tests, it is important to understand the details of these protocols and special requirements for active agent analysis.

For all contaminant reduction testing, the standard requires testing of two systems. Before beginning the test, the systems are flushed and conditioned according to the manufacturer’s instructions. The test water characteristics for the chlorine reduction test are provided in Table 2. 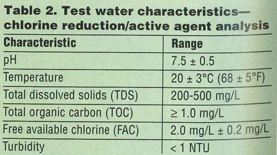 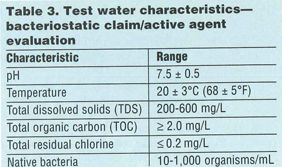 The first sample is collected after 10 unit volumes of the influent challenge water have passed through the system. Additional samples are collected at every 10 percent interval of the system capacity, up to and including 100 percent of the capacity. One influent sample and one effluent sample from each test unit are collected for the chlorine reduction, and also to analyze the concentration of the active agents. The influent is analyzed for active agents to establish that any in the effluents are coming from the systems. Sample collection always occurs during the ‘on’ portion of the cycle (i.e. during flowing conditions). Additionally, the standard requires that at least one sample for the evaluation of active agent must be collected immediately after a rest period of at least eight hours. The NSF lab operates for 16 hours during the day, conveniently providing the required eight-hour rest period at the end of each day. 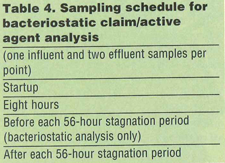 which includes native microorganisms that are measured by heterotrophic plate count. The bacteriostatic test lasts for six to13 weeks, depending on the manufacturer’s replacement time. The influent water containing native bacteria is slowly introduced with a one minute-on / 59 minute-off cycle operated for 16 hours, followed by an eight hour stagnation period. After every five days (each weekend), a 56-hour stagnation period is introduced to foster bacterial growth.

Samples are taken according to the schedule shown in Table 5 to assess microbiological counts and to ensure that the device is releasing the active agent at a concentration within the acceptable limits. In order to certify a claim of bacteriostasis, Standard 42 requires the geometric mean of the heterotrophic plate counts of the product water samples from each system to be no greater than that of the influent challenge samples 20 percent. In other words, if the influent challenge water contained 100 organisms/mL, the product water must contain no more than 120 organisms/mL. A bacteriostatic claim does not mean that the device removes bacteria, rather, that it prevents the growth of bacteria (allowing for a measurement precision of 20 percent). Active agent present in the product water collected according to the bacteriostatic test procedure must be within the acceptable concentrations for all sample points.

Now that the “plot” for the analysis of active agents has been revealed, it is important to highlight that the two test protocols described above have different sampling schedules and contaminant reduction criteria. However, the requirements for the presence of active agents are identical for each protocol with the goal of protecting public health and safety.

About the author
Ellen Van Buren has been an Account Representative with NSF International for two years, working with certification of residential and municipal drinking water products. Her previous experience was in the area of analytical chemistry. Van Buren has a bachelor’s degreee in chemistry from Michigan State University and can be reached at 734/827-3822 or via email to vanburen@nsf.org.