By David Morgan and Ken Scheer 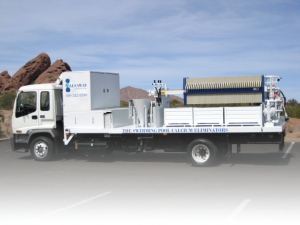 While many areas of the country are plagued with hard water, the Southwest United States has some of the hardest water in the nation. This is even more problematic because much of the Southwest is in a decade-long drought and the high temperatures mean swimming pools are claiming much of the region’s water.

Valley of the Sun
The Phoenix metropolitan area’s ongoing problem is a lack of water. According to the city’s government, Phoenix has been in a drought for more than a decade and that could continue for as long as 20-30 years. Once a dusty, one-horse town, Phoenix is now one of the fastest-growing metropolises in the nation. It is estimated that 5,000 people move to the greater-Phoenix area each month. Hot summers and over 300 sunny days a year makes swimming pools a near-necessity. It has been estimated that there are nearly 1.5 million pools in the greater-Phoenix area. This means that much of the Valley’s most valuable resource – water – is going into those swimming pools.

Water hardness
The most predominant problem with swimming pools in Arizona is water hardness. The white powdery residue that is often found above the water line on decorative tile and built up on water features is evidence of high levels of calcium. While these signs are obvious to the naked eye, there are other important issues lurking in filters, pumps and hoses that move water through the pool. The build-up of calcium and other minerals on this equipment can lead to costly mechanical problems that can jeopardize water quality. This scaling and build-up is due to the presence of calcium, magnesium and other minerals present in the potable water used to fill and maintain pools and spas.

Potable water in Phoenix is supplied by several different sources such as the Colorado and Salt Rivers and from wells. The Colorado River winds its way through the Grand Canyon, picking up high levels of minerals it traverses the state before finding its way to Phoenix. All of the Valley’s water supplies are saturated with hardness minerals, some reaching as high as 1,000 parts-per-million (ppm) of calcium hardness – and some even higher.

Ideal hardness levels for swimming pools are approximately 150-250 ppm. Phoenix area tap water has hardness levels of between 300 and 900 ppm (and higher in some instances) depending on where in the Valley the sample is taken. So the hardness levels are too high the day the pool was initially filled. Those levels will only rise as the water evaporates; the minerals stay behind and more hard tap water is used to replace the evaporate.

Solving the problem
Pool owners previously had only two solutions to this conundrum. The first was to drain the pool and start over with tap water. This process was expensive, time-consuming and starts from the tap at a higher-than- optimum hardness level, as noted. We’ve not yet mentioned the environmental issue of wasted water!

The second solution is to add a chemical that chelates (binds up) the minerals, but those do not remove them from the pool water. Their presence requires the repeated use of chemicals at higher and higher concentrations to be effective. Eventually, this method will fail; draining the pool will be inevitable.

Both of these approaches end up with the owner having to drain the pool. There are many problems that face the consumer with draining and refilling the pool. The primary concerns are as follows:

Water conservation is the underlying theme throughout all of the listed concerns. Swimming pools are a major contributor to water consumption in all areas of the US and in many parts of the world: but most especially in the hot and dry climate of the southwestern desert regions.

A first-time pool owner
In 2000, one of the thousands of new residents to move to Phoenix from the Midwest was both a first time pool owner and an experienced chemist. Dave Morgan toiled with the problem of a green pool. It required treatment after treatment, but remained cloudy and unusable most of the time. Morgan was determined to find a chemical solution that would bring his pool water chemical and mineral count to the optimum levels and do so without emptying his pool or his wallet and without wasting thousands of gallons of water. The culmination of years of work is a patent-pending mobile swimming pool water purification process.

Measuring hardness in pool water
Low concentrations of hardness are virtually impossible to achieve in the Phoenix area – it is high concentrations that are commonplace.

Hardness is measured in parts-per-million (ppm) or in milligrams per liter (mg/L); both represent the same number. A typical hardness in Phoenix tap water is between 300-900 ppm and higher, depending on where in the Valley the pool is located. Yet the ideal concentration for a swimming pool is approximately 150-250 ppm. Concentrations lower than 60 ppm tend to be corrosive to pools’ equipment and construction materials if left at this level for an extended period of time. Concentrations above 350 ppm are much more problematic for the pool owner, making the pool water hard to control with respect to clarity and chemical stability.

Some of the more severe problems with high levels of hardness are:

A new process
Morgan’s solution to the problem relies on combined chemical and mechanical process. The company fabricated a patent-pending ‘first-of-its-kind’ vehicle that travels the Valley with all the necessary supplies to service several pools a day. The process is as follows:

Crystal clear results
The technique produces a sparking clean pool that is now at optimum calcium and hardness levels and available for immediate use. The process reduces time spent draining, acid washing and refilling the pool –at a cost savings over all those methods. Customers have also found that because their pools are at optimum chemical levels, they now require fewer chemicals to keep them maintained.

The real winner here is the environment. This totally green process uses no harmful chemicals and saves hundreds of thousands of gallons of water. In addition, the solid materials that are removed from the pool can be used in numerous different applications by various businesses, including the roofing industry.

The future is clear
Morgan’s procedure will increase the life span of the water significantly, requiring the process to be repeated every two years depending upon the evaporation rate of the pool water and how quickly the hardness concentration increases. Today, it is commonplace for pool companies to recommend draining and refilling of pools every one to two years. With this new process, a treated pool will rarely require draining for reasons of hardness concentration resulting in millions of gallons of water saved each and every year.

With only one commercial truck on the street, since March of 2007, Morgan’s company has already conserved 1,000,000 gallons of water. They are currently fabricating a second truck – with a few enhancements that will allow the process to go faster – that will enable them to service even more pools. The firm anticipates conserving more than 350 million gallons of potable water in the Phoenix metropolitan area over the next five years.

About the authors
David Morgan is President of Calsaway; he has a degree in chemistry from Purdue University. Most recently he was Product Development Chemist for the position of Laboratory Manager for Praxair Surface Technologies in Phoenix and Research and Development Chemist for Praxair in Chicago, IL. He also held a position as an analytical chemist in a Class Four wastewater purification facility outside of Chicago for nine years, which treated 64 mgd. Ken Scheer is Vice President for Calsaway and oversees day-to-day activity and all marketing efforts for the company. Before starting Calsaway, Scheer founded several other successful business ventures.

About the Company
Calsaway is the only mobile pool service that actually removes the hardness minerals from pools and spas. Located in Phoenix, Arizona, Calsaway’s mission is to be the leader in providing a new and innovative water purification service that will enable their clients to conserve one of nature’s most valuable resources.  The company will accomplish this through the use of a breakthrough chemical and mechanical process resulting in clean water for our customers without the needless waste of this resource.  More information about Calsaway can be found on their Web site: www.calsaway.com. Calsaway headquarters are located at 2235 W. 1st Street–Suite 102, Tempe, AZ. 85281; telephone: 480-282-8599; Fax: 480-626-2415.