What is ecomagination? To quote GE’s 2006 annual report, “Ecomagination is a business strategy to meet customers’ demands for more energy-efficient, less emissive products and to drive reliable growth for GE — growth that delivers for investors long term. Ecomagination also reflects GE’s commitment to invest in a future that creates innovative solutions to environmental challenges and delivers valuable products and services to customers while generating profitable growth for the Company. “

Water is one of GE’s top five strategic growth platforms and ecomagination is the company’s most successful initiative in recent memory. Now GE is bringing ecomagination to residential water treatment with the launch of the first ecomagination-certified product attending this industry, the Homespring™ Central Water Purifier. (See WC&P Dec. 2005.)

Andrew Warnes is widely known as a result of his tenure as the International Director of the Water Quality Association, where he worked primarily on European regulatory issues on behalf of the US water treatment industry. Prior to that, he was the Director of International Sales & Marketing for Sta-Rite Industries; he also led growth into international markets for Kinetico Incorporated. 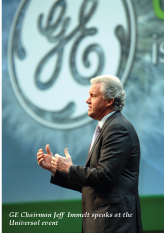 Warnes begin in water treatment 15 years ago, when he left the military after Desert Storm. Today, he’s more excited than ever about the opportunities available to those in residential water treatment.

“Several months ago, you gave me the chance to write an article about whether the fortunes of the residential water treatment industry are tied to the home construction market (WC&P March 2007). The research proved to me that, at least here in the US, the residential water treatment industry is closely linked to new home sales – so much so that there has been an approximate one-to-one correlation between new homes sold and POE units sold for at least the past 16 years. This tells me that the industry has significantly larger opportunities that are currently untapped and it needs to do a better job at marketing itself – and I’m not content just to sit back and ride the housing cycle,” he stated.

Warnes believes the industry is ready for a more dynamic approach to marketing and that GE is the company that can do it. “GE has the respect, the reputation and the resources to change the way the residential water treatment industry is perceived by consumers. Ecomagination is an initiative that can change perception and I’m thrilled to be right in the middle of what I consider to be a watershed moment in residential water treatment,” Warnes said. 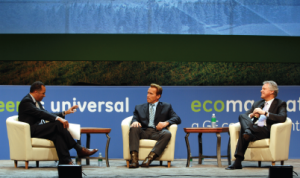 Warnes is Product Manager for GE’s Homespring™ Central Water Purifier line. The technology is unique – the device uses the same hollow-fiber membrane technology that has been used for years in full-scale municipal drinking water treatment plants treating up to 100 mgd. “We put this membrane technology into a compact, automatic package that home and business owners can purchase at a reasonable cost and that regulators are comfortable with when we make a bacteriological purification claim,” Warnes summed up.

The Homespring is the first GE residential ecomagination product for water treatment. It incorporates proven hollow fiber ultrafiltration (UF) membrane technology that provides safe and reliable water to homes, small communities, businesses, rural locations and areas lacking adequate infrastructure. “We pursued the ecomagination certification to truly prove the Homespring’s unique points of differentiation. This was in addition to the independent testing and certification that the Homespring already, which includes NSF 42 and 53 as well as WQA and Biovir certification to the US EPA Guide Standard and Protocol for Microbiological Purifiers.” 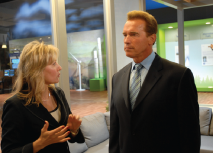 To earn ecomagination certification, the device had to pass through an independent third-party review and audit of its environmental, economic and operational benefits to customers, Warnes explained. The certification process verified the ability of Homespring to make the ecomagination claims. 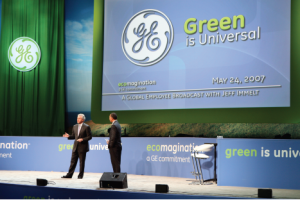 On May 24th, GE celebrated the second anniversary of ecomagination with a gala “Green is Universal” event hosted by Chairman and CEO Jeffrey R. Immelt at NBC Universal’s Universal City, Calif. Governor Arnold Schwarzenegger was there to speak on sustainability’s new bottom line and the role that energy policy plays in making new technologies viable for businesses and governments.

At the event, more than 600 customers experienced the power of the ecomagination portfolio and a series of partnerships and product launches were announced. GE unveiled its ecomagination Homebuilder Program, a first-of-its-kind package of energy-efficient appliances, lighting, advanced building design, even a unique energy-efficient mortgage from GE Commercial Finance and the Homespring™ Central Water Purifier.

Warnes is proud of GE’s real commitment to ecomagination – a commitment being recognized in the marketplace. “GE reported ecomagination revenues from energy and water efficient products and environmentally advantageous services rocketed past $12 billion in 2006, up 20 percent from 2005, while the order backlog rose to $50 billion,” he noted, which means that for GE, green is truly green.

“The timing of our ecomagination certification for Homespring could not be better. By going to market with ecomagination products we ride the wave of an established brand and gain a high profile image,” Warnes said.

Warnes wants consumers to be excited about the prospect of purchasing a highly efficient, high quality product manufactured by one of the most respected companies in the world that delivers on its promise of protection and reliability. “Residential water treatment dealers have told us that Homespring’s ecomagination certification gives them the ability to make marketing claims that set them apart from competitors and helps them to get appointments and drive sales,” he reports.

As to marketing direction, Warnes notes that customers cannot look at a Homespring and say ‘I’ve seen this before.’ It can be another weapon in the dealer’s arsenal, one that nobody else has. Consumers are bombarded with messages stating that the environment is deteriorating, that the infrastructure is staggering under the needs of a growing global population and that wars will be fought in the future over clean, safe drinking water.

“At GE, we envision a future where consumers will make a conscious choice to select water treatment products that benefit the environment and where evolving regulatory requirements will reinforce their choices. Ecomagination prepares us for that future and helps our customers build better, stronger businesses along the way,” Warnes summed up, repeating what he’d said earlier, “ I can’t imagine being anywhere else than right here at this very moment. It’s as exciting as business can get!”