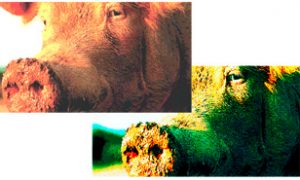 Although not a new microbial infection worldwide, neurocysticercosis (a form of cysticercosis) is recognized as a growing problem in developed nations. Increases in international travel and immigration are listed as reasons for the emergence of this parasitic disease in the United States, particularly in states that border Mexico. Recent studies by the US Centers for Disease Control (CDC), the University of California and California public health officials and others highlight the importance of this disease who’s causative agent can be spread via food, water, contaminated surfaces and other fecal-oral routes of transmission1.

Causative agent
Taenia solium is a pork tapeworm and the primary cause of cysticercosis. Microscopic eggs of the tapeworm are shed from infected humans and can expose others through the environment. Humans ingest the eggs following exposure to contaminated food, water and surfaces. While humans are the definitive host, pigs serve as an intermediate host following ingestion of contaminated human feces. Therefore, eating undercooked pork from infected pigs contributes to the life cycle of the organism. Once ingested, the eggs hatch in the intestine and subsequently invade the intestinal wall, disseminate in the bloodstream and have the ability to invade multiple tissues and organs, including muscles, the brain, liver and kidney. In the gut, the eggs can eventually develop into adult tapeworms, persisting for years, capable of growing up to seven m in length and producing tens of thousands of eggs that are shed in feces.

The larvae of the tapeworm form cysts in the body. Cysts have been known to form in the eye, causing blindness; in the heart, causing an irregular heartbeat or, rarely, heart failure; in the spinal cord, causing weakness and even paralysis. For some, infection localizes in the brain, leading to a serious and sometimes fatal infection. Estimated death rates range from <1 to nearly 10 percent in infected populations. The term neurocysticercosis refers specifically to the development of nervous system disorders following infection in the brain. According to the CDC, cerebral infections of cysticercosis can cause symptoms ranging from headache, seizures and mental disorders to sudden death.

Infections of cysticercosis are difficult to diagnose and treat. Sometimes the course of treatment is no treatment, as the use of antiparasitic drugs to kill the organism initiates an immune response in the human host, amplifying adverse health effects. It is our immune response that leads to swelling and scarring in infested tissues and organs. Surgery is sometimes an option to remove infected areas. Supportive therapy, to reduce swelling or minimize seizures, is sometimes the only advisable treatment course. Timing of treatment relative to symptomology and disease manifestation is important.

Deaths in the southwest
Taenia solium infections have been documented worldwide, especially in regions where humans are in close contact with pigs, the parasite’s intermediate host andwhere undercooked pork is consumed. Freezing contaminated pork can kill the organism but control of the disease via food safety guidelines would only provide limited prevention as the disease continues to persist in the human host and is spread by fecal contamination of the environment.

Surveillance in the US from 1990 to 2002 documented 221 deaths in 20 states due to cysticercosis3. The age of those suffering fatal infections ranged from two to 88 years old with a mean age of 40. The majority of those that died in the US (85 percent) were Latino and foreign-born and 67 percent were immigrants from Mexico. The study also found a higher prevalence rate among men. This trend was thought to be due to social/cultural reasons as opposed to a truly increased risk among males, where there are a greater number of male immigrants entering the US in search of employment. This trend is also reflected in the relatively young ages where infections are predominant.

Although 21 US states reported at least one death from cysticercosis, most (57 percent) of the deaths occurred in California and higher rates were evident in other border states where immigration and travel south of the US border are higher. One study documented 6.5 percent of disease cases in frequent travelers to endemic (i.e., consistently present in the population) regions.

Researchers state that the growing Latino immigrant population in the US increases the likelihood of cysticercosis-related disease and death2. In Latin America, the disease is endemic and a leading cause of epilepsy in the region as in Africa, India andChina. Carriers tend to be people from rural areas in developing countries where pigs roam freely and may ingest human feces1. In 2005, however, 44 cases of cysticercosis were reported in California and 10 percent of emergency room visits for seizures in the southwest are due to cysticercosis infections.

Disease prevention
Several opportunities exist for the prevention of severe cysticercosis-related disease from populations to environments. In endemic regions, maintaining good personal and environmental hygiene promises to help break the cycle of disease transmission. Preventing pigs from roaming free where they could have access to contaminated human feces could help minimize the contribution of this intermediate host, as could the consumption of only well-cooked pork or previously frozen pork products. Early treatment of tapeworm or cysticercosis infections might help to minimize the potential of the disease spreading to the brain or other vital organs where symptoms are likely to be more severe and treatment is more difficult.

In the US, the disease is primarily spread by the fecal-oral route of transmission where contaminated food, water and surfaces are primary targets for intervention. Methods of drinking water treatment currently available, including ultraviolet light disinfection and filtration, when properly applied are effective against parasites; however, chlorine disinfection alone is ineffective against many of these organism types. Food and water precautions are particularly important when traveling to regions where the disease is persistent in the population.

Conclusions
Due to the lack of a surveillance system or required reporting of cysticercosis in the US, the true incidence of disease in unknown and likely underestimated. According to experts, “given the ongoing sizeable immigration from disease-endemic areas, cysticercosis will grow in clinical and public health importance”3.

Changes in demographics can affect disease emergence. Given that cysticercosis is widely prevalent in many Latin American countries and that 52 percent of the US immigrant population in 2000 was from Latin America (up from 31 percent in 1980 and 42 percent in 1990; according to US Census data), an increased surveillance of diseases endemic to particular regions of immigrant origin is warranted, as are global strategies for control. 4

While the causative agent of cysticercosis has a complex life-cycle, several infectious forms and multiple transmission routes, the waterborne route of transmission and exposure may be one of the easiest to control as current practices of conventional and point of use water treatment, aimed at removal of cryptosporidium oocysts, would also be effective for removal or inactivation of the this parasite.