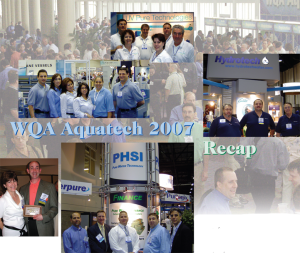 This year’s WQA Aquatech trade show and convention was huge: nearly 5,000 attendees and 400 exhibitors! Orlando’s Orange County Convention Center was a dazzling site as members converged upon the complex in dozens of shuttle buses from area hotels. At first it seemed daunting—a whopping 2,100,000 square feet of exhibit space is behind those elegant glass arches! Once inside, all were reassured, as WQA Aquatech occupied the north exposition space, making it an easy destination.

Classrooms for continuing education presentations were located throughout the north building’s meeting spaces, making everything just a short walk away. WQA’s Education Coordinator, Tanya Lubner, created a tri-curriculum approach to the educational offerings, so that whether in the industrial, commercial or residential arena, people could attend every class in their chosen area without schedule conflicts. Further, most classes were outside of show floor hours, allowing all to take full advantage of both aspects of the conference. 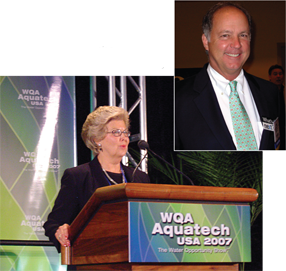 Opening day
WQA’s Executive Director Peter Censky had to miss this year’s gathering because of emergency eye surgery. It is a tribute to his leadership to note that the entire WQA staff rose to the occasion, handling everything smoothly, drafting pinch-hitters to present Censky’s portion at panels and such throughout the event.

For the first time in several years, trade show attendees never had to leave the show floor. A full snack bar in the entrance area combined with a food court in the rear enabled folks to spend the day visiting the displays. Of the nearly 400 exhibitors, roughly 80 were new to WQA, many representing international companies. The majority of those had reached us courtesy of Amsterdam’s RAI, WQA’s Aquatech partner. Ids Boersma, Director of International Exhibitions for RAI, addressed the crowd during opening ceremonies.

“Working together to present the best, the brightest and the brand new both in Amsterdam and in the US is the core of our partnership,” he said, noting that both shows continue to increase in size and attendance, proof of the success of the partnership. 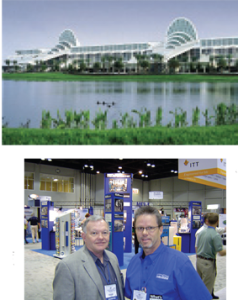 Standing in for Censky at the grand opening assembly, former WQA and PWQA President Pat Dalee presented the 2007 Leadership Awards, as follows:

Financial mavens Steve Maxwell and Deborah Coy delighted the audience by broaching issues of the industry in white hat/black hat postures, changing hats regularly so they could garner equal rounds of hissing and applause. Aquion Partners’ Bob Ruhstorfer rounded out the group, sharing his thoughts on where the industry has been—and where it’s headed. Moderated by WQA’s new President Dennis Rupert, the panel was a big hit.

Sections, task forces and education
In an all-day session, the industrial section continued their efforts to hammer out a working training program for individuals in this important area. To take advantage of the gathering of so many members in one place, as well as to access the expertise of members of the American Filtration Society co-locating at the convention center, chairperson Peter Cartwright organized a charette. Better known in the world of architecture than in water treatment, it’s a brainstorming session with a timetable, where quick thinking outside the traditional box reigns supreme. Task force members put together new approaches and outlined work to be done in the coming months. The group will meet again at WQA Midyear in Nashville, Tenn. to report progress. A combination of apprenticeship and class instruction is the direction being pursued. 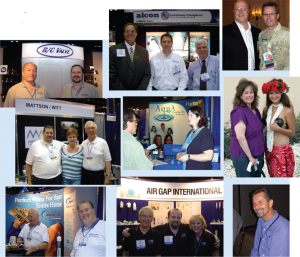 Dealers have brought continued opportunities to those in the commercial section, where training and classroom presentations by many of the industry’s leaders provides the experience and knowledge necessary to enter this booming area of water treatment. Now that training will have its own certification standard: CCWS will designate Commercial Certified Water Treatment Specialists. Look for a draft of this new certification program at Midyear as well. Right now, the approach is that those wishing to pursue this channel must first obtain CWS-I ranking, thereby ensuring they begin the CCWS training with a good understanding of basic water chemistry.

In the manufacturers section, attendees heard from California DHS staffers firsthand on the progress made towards third-party testing at WQA laboratory. This will be a reality within weeks of the close of the show, thanks to the diligence of all concerned.

International members gathered to discuss the state of regulations, commerce and contaminants in nearly every country on the map. Tim Carroll from Unicorn Water Treatment in Perth, Australia spoke of the rising problems there due to the switch to monochloramine in municipal water treatment; Tom Palkon recounted WQA’s efforts in India while Joe Harrison updated all on the success against newly proposed regulations in Italy as well as areas of changing US regulations. Kinetico’s Rod Yoder discussed the calcium/magnesium report by World Health Organization; Tony Frost acquainted members with an opportunity to help fund research on the beneficial effect of softened water for children suffering from eczema currently being organized in the UK.

In education sessions, everything from reverse osmosis to how to correctly read and interpret a job candidate’s resume were presented throughout the several days of the gathering. In addition, the symposia of the American Filtration Society were open to those in attendance. Paul Overbeck of the International Ozone Association (IOA) and Jim Bolton of the International Ultraviolet Association (IUVA) presented multiple sessions to all the co-locating organizations.

Board meeting
Pentair’s Neil Desmond turned WQA’s leadership over to Culligan’s Dennis Rupert. Financial reports showed the results of the duo’s work together over the past year, increasing revenues through a series of successful initiatives.

There are 408 new WQA members and 80 of them came to Orlando for the event. Final numbers on the Ray Cross Challenge are still coming in, but at present pledged amounts will mean a yearly annuity of $300,000 to the Water Quality Research Foundation thanks to this generous endowment from one of the industry’s pioneers.

Rupert hopes to expand dealers’ and manufacturers’ abilities to react to disasters and Dar Watts of American Aqua, Inc. acquainted board members with the Red Cross’ efforts in that regard. “While we all hope it will never be necessary, dealers can provide the most vital commodity—water—when disaster strikes. If we can all be ready to do so, we can save lives,” Rupert summed up.

The Government Relations/Water Science Joint Committee continues to liaise with on-site wastewater professionals. This dialogue is vital, particularly in light of the number of new homes in the US which have on-site septic systems. “We hope to find a test area soon where we can work together and really determine the science of how our water softeners and their septic systems interact,” explained D.J. Shanahan of Sharp Water, Salisbury, Md.

Member services and the History Task Force both reported progress, while the Education Task Force announced the termination of the high school certification program. All noted the success of the Market Development Committee in the size of the gathering.

The importance of sustainability, particularly in light of new demands by retailers, will drive research and study in the coming year.

Convention lobby
It was easy to underestimate the size of the crowd…until Wednesday evening, when all took the escalators up to the lobby at closing time for a planned networking event. People were stunned to find themselves in a crowd of thousands, while the music of Pentair’s Sid Fly and his guest fiddler from Texas filled the air. None could believe how many folks were attending the show!

President’s reception
Jerry Bishop of Water Resources International, Inc., Phoenix, Ariz. received several well-earned kudos for membership recruitment including the Bill Peltier Memorial Award. But it was the number of members Bishop has recruited to date that truly dazzled those at the reception—270 so far!

Fire dancers and hula girls
Traditionally, WQA organizes a dinner on the last evening of the annual event, but this year they took advantage of the glamorous facilities at the host hotel (Rosen Shingle Creek) and planned a poolside cocktail party instead, with entertainment designed to dazzle. As members entered, they were greeted by a lovely maiden in a grass skirt and coconut shells, a photo opportunity none could resist. As people nibbled and mingled, some were selected to be a part of the show. Hula dancers began to entertain the crowd to the strains of Hawaiian music and as the skies darkened, fire dancers amazed the crowd. Audience members were brought up onto stage, where they were taught to wiggle their hips and perform to the ukelele and drums.

Looking forward
Manufacturers unanimously report that the event was good for business, while those who rely on dealer traffic said it was slow overall. All agreed that more networking would be possible if attendees could be in a single host hotel instead of in many separate establishments; further, many noted that a single hotel with on-site convention space would, in fact, be the ideal in terms of best use of time. As our shows get larger, that may be impossible because of the number of exhibitors and attendees. In short, larger venues are an unintended consequence of WQA success!

Let’s Hear It for Texas!
The Texas Water Quality Association had great news for its members attending WQA Aquatech in Orlando—some conference classes were approved as general training credits for Licensed Water Treatment Specialists in the Lone Star State.

“Based upon information provided, this request meets requirements contained in the current TCEQ regulatory guidance RG-373: Approval of Training for Occupational Licensing. Therefore, I am approving the Water Quality Association to provide the training sessions as indicated in the attached table from the conference’s schedule of events for general training credit for licensed water treatment specialists in Texas. Hours of training credit are based on converting the WQA CEU credit assessment.”

Convention attendees had to provide documentation of technical session attendance, which the TWQA made easy with a form available at the rear of each classroom. Each licensed attendee wishing to obtain credits had to return the completed attendance form to TWQA’s offices prior to the reporting deadline, according to TWQA’s Perry Ratcliff, Chairman of Education and Training.