Calgon Carbon Corp. has agreed to settle legal disputes with Trojan Technologies related to certain Calgon Carbon patents for the use of ultraviolet (UV) light to disinfect drinking water. In exchange for an undisclosed cash payment, Calgon will grant Trojan worldwide immunity from all current and future legal action. ?

Purolite Corporation opened a 7,000 square foot, state-of-the-art $2.5 million research and development facility at its Zhejiang, China site. Three other units (cation, acrylics and polymer) were also added. An anion plant, employee facilities and warehousing units are in the planning stages. ?

The National Swimming Pool Foundation®’s (NSPF) Board of Directors voted unanimously to allocate $812,500 in research grants for the year 2007-2008, increasing the budget 25 percent over the 2006-2007 period. NSPF will accept grant applications through June 1, 2007. ?
The International Ozone Association (IOA) and International Ultraviolet Association (IUVA), will host the World Congress on Ozone and Ultraviolet Technologies (August 27-29, 2007 in Los Angeles, Calif.). The joint Congress will feature three full days of technical papers presented by members, including workshops and forums demonstrating the latest technology. ?

Membrana GmbH and Dalian OKM Industrial Ltd. have signed an exclusive licensing agreement which allows OKM to manufacture and market filtration devices utilizing Membrana’s UltraPES® 0.7 and 0.8 ultrafiltration membrane in China. OKM products manufactured and sold in China will be marketed as Ultra- Flux™ (a trademark of Membrana GmbH) Filtration Devices. ?

Culligan recapitalization announced
Culligan Holding S.àr.L., a wholly-owned subsidiary of Culligan Ltd., announced a potential $900 million recapitalization, subject to conditions including definitive documentation and board approval. The transaction would include entering into new senior secured revolving credit and term loan facilities (up to $640 million anticipated aggregate amount), together with an anticipated second lien term facility (up to €200 million anticipated aggregate principal amount), by Culligan and certain of its subsidiaries. Culligan Ltd. expects to distribute approximately $360 million from the recapitalization proceeds to its equity holders, including Clayton, Dubilier & Rice Fund VI Limited Partnership which owns approximately 83 percent of Culligan Ltd.’s outstanding shares. Proceeds from the recapitalization would also be used to repay all outstanding amounts under Culligan’s current credit facility and to redeem the existing eight percent Senior Subordinated Notes (due 2014) issued by Culligan Finance Corporation B.V., a subsidiary of Culligan.

US EPA news
US Environmental Protection Agency has issued two new compliance guides. Complying with the Stage 2 Disinfectant and Disinfection Byproducts Rule: Small Entity Compliance Guide and Complying with the Long Term 2 Enhanced Surface Water Treatment Rule: Small Entity Compliance Guide each contain a general introduction and background, describe specific requirements for the rules and provide information on how to comply with those requirements. Both manuals are available for free download at the website, www.epa.gov.
The agency issued its first WaterSense label for the Irrigation Association’s (IA) Certified Irrigation Designer and Certified Irrigation Contractor programs for adherence to water-saving techniques in landscape irrigation. To earn the label, the certification programs must test for the ability to design, install and maintain water-efficient landscape irrigation systems, including tailoring systems to the surrounding landscape, selecting water-efficient equipment, tracking local climate conditions and developing appropriate schedules for watering. 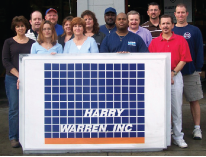 Watts Regulator Company announced that the 2006 Watts “Golden Regulator” Representative of the Year Award was presented to Bob Mycoff and Bill Orris from representative firm Harry Warren, Inc. (Orlando, FL) at its 2007 National Sales Meeting in Scottsdale, Arizona. The firm has been a Watts sales representative for two years. The award is presented annually to the manufacturers representatives achieving significant sales growth while providing superior customer support at all levels.

NSF approved by US EPA program
National Sanitation Foundation, International (NSF) was recently approved for participation as a WaterSense program independent product certification organization. The certification process will consist of product testing to ensure that high-efficiency toilets consume no more than 1.28 gallons per flush (gpf) while successfully meeting all required performance testing.

It combines provisions from the Association of Home Appliance Manufacturers (AHAM), US EPA and the Department of Energy under one protocol.

NGWA seeks volunteers
Volunteers are needed to assist with development of a nationwide, long-term groundwater quantity and quality monitoring framework. The federal Advisory Committee on Water Information (ACWI) charges the newly created Subcommittee on Ground Water (SOGW) with leading the nationwide effort. For more information or to submit your name for consideration, email SOGW Executive Secretary Chris Reimer at creimer@ngwa.org with SOGW in the subject line. Include a short paragraph identifying which work group you are interested in being considered for, why you are interested and what applicable background you bring.

Filtering technology developed at UD
University of Delaware (UD) researchers have developed an inexpensive, nonchlorine-based technology that can remove harmful microorganisms, including viruses, from drinking water. Udaily reported that the patented technology, developed jointly by researchers at the College of Agriculture and Natural Resources and the College of Engineering, incorporates highly reactive iron in the filtering process to deliver a chemical knockout punch to a host of notorious pathogens, from E. coli to rotavirus.

Water bottle ban in Canada?
The sale of non-reusable water bottles is under consideration in Quebec, according to Solid Waste & Recycling. Acting on its opposition to new 15-liter (four-gallon) bottles that must be disposed after use, the province will refer the problem to the Cabinet. Environment Minister Claude Béchard wants prompt action in order to prevent a similar situation to that of Ontario, where the containers enjoy growing popularity. He is expected to present a draft regulation “prohibiting the distribution of large non-reusable containers,” which refers to any bottles with a capacity of more than eight liters (two gallons).

Auburn professor’s technology launched
Auburn University Chemistry Professor Dave Worley’s N-halamine technology, the basis for HaloSource, Inc. in-home filters, was recently introduced in Bombay, India. The N-halamine process binds atoms to the surface of various materials. Filters contain polystyrene beads that hold oxidative chlorine or bromine atoms for long periods of time and can be easily refurbished. Worley has received 30 patents in the course of his discovery. The company pays royalties to the university through a technology transfer agreement.

Siemens plant design for China
Siemens’ Industrial Solutions and Services Group has supplied the design and equipment for Degussa Rexim (Nanning) Pharmaceutical Co. Ltd.’s purifying plant in Wuming, South China. The order included delivery of electrical equipment, instrumentation and automation systems. The facility will remove nitrogen from wastewater arising from the manufacture of pharmaceutical products. Current treatment capacity of more than 300,000 cubic meters of wastewater per year may be expanded in the future.

Water cooler contamination in New Zealand
Legionella bacteria detected in a Christchurch Hospital office-type water cooler filter may be the first case of its type in the world, according to the New Zealand Herald. Testing done last October after a patient showed symptoms of Legionnaires disease found one of 14 office-style water coolers had a significant level of the bacteria in a filter. It was different than the type that had affected the female patient and testing was done as a precaution. No evidence suggests the water cooler was linked to any hospital patients or visitors becoming ill. 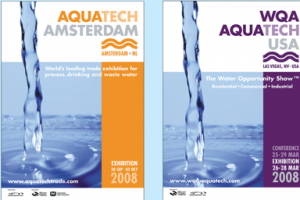 Aquatech brand makeover
Amsterdam RAI designers have developed a new look for Aquatech to reflect the international and innovative character of the exhibitions. The campaign blends unity and individuality while harmonizing the three major shows (Amsterdam, US and Asia) and features a serene image of pouring water that will be similar for the three shows but with distinctive colors and text for each country.