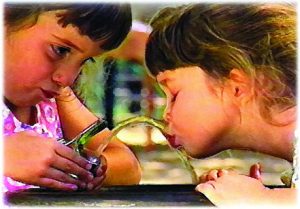 How time flies!
The other day, I happened to be at the front desk of the agency when I saw a young woman at the window. A stranger to me, I asked if I could help. She smiled and said of course I could – because she was there to see me. I had no idea who she was. Once she explained, I was absolutely floored. I’d insured her when she was four. I had worked with her family through the years; I knew she’d gotten married and her husband had returned from the sandbox and they had their first home. But I didn’t know it from her. We spent some time catching up – and I was thinking how fast 20 years had passed and of the good luck I’d had in how I insured her and when.

And that’s this lesson: people, usually parents but sometimes grandparents, often want to get life insurance on their children or grandchildren. And it can be a very good idea.

Why insure a child?
There are several reasons. One is for burial expenses, just in case. But that’s very hard to think about. Nobody wants to imagine a child dying. There are other reasons. One of the companies we use discounts the home and auto premium if the insured also purchases a life policy from that same company. For one client, the discount was substantial, as his home and auto premiums were right up there. Turns out the discount was slightly more than the total premiums for starter life policies for his daughters. In other words, the two new life policies generating the discount resulted in no additional outlay. Free, in other words.

He couldn’t do it. His wife absolutely refused to contemplate life insurance on their daughters. There are professions in which the practitioners get paid for telling people they’re acting irrationally, but mine isn’t one of them. Think about life insurance, think about death…maybe even invite death. So goes the subconscious reasoning for some, anyway.

Sad to say, children do sometimes die. It sounds obscene to mention money in that context, but even that horror can be worse for lack of money. In one case, a child died at the age of five; the family had to borrow to manage the funeral and associated costs and the various medical expenses not covered by insurance. Which meant that each month, they relived the entire process while writing a check to the bank. Other issues in that worst-case scenario involve the parents’ inability to work for some time, possible counseling for the parents or siblings and what are called ‘final expenses’. Money doesn’t make up for a lost child, but lack of money to help with the very real expenses exacerbates the terrible impact.

Child Term Riders
I prefer to use a Child Term Rider (CTR) when insuring children. The CTR is attached to a parent’s policy. A CTR with a death benefit of $10,000 costs between $60 and $70 annually, no matter how many children you have, one or 10. A CTR is somehow less personal, although it does the same thing. During the application process, we name the kids on the appropriate box on the application and that’s it.

Having the insurance early in life means you don’t have to try to get it later. In the case of the young lady I didn’t recognize, that was lucky. In her early teens, she developed juvenile onset diabetes. That’s a tough medical problem and insurance companies don’t like to issue policies to people who have it. But in this case she already had her insurance.

Sure, $10,000 isn’t much for an adult. But with a CTR, the year in which you are too old for it (generally age 25, when you are dropped off the rider), is the year in which you can get up to five times as much insurance from the company without having to be insurable. It’s guaranteed. So she had the company locked into offering up to $50,000 at an age when she would need it, whatever her health situation would be.

I have another young lady with a different health problem whose CTR we managed to work up to $100,000. In that instance, the health issue manifested itself years after she was accepted on the CTR…but wait, as they say late at night on the high end of the cable channels, there’s more. An adult can get a CTR even if there are no children.

Which is a good idea, since a child born when a CTR is already in effect is picked up automatically. No underwriting. Guaranteed. I have a couple of young women with CTRs on their personal life insurance, with no kids and with no husbands in sight, either. (Shortage of really, really good men, apparently.)

If and when they have children, their offspring will be insured just as the two young ladies I mentioned earlier are insured, even if the offspring are born with congenital health issues. And these hypothetical-right-now children will have guaranteed access to five times as much insurance when they are in their early twenties and drop off the CTR.

To put some numbers on it, between $60 and $70 per year will provide $10,000 on all the children in a family. If there are four children, that’s $40,000. If they choose to take advantage of the guaranteed conversion at the end of their eligibility for the CTR, the insurance company is locked into issuing a total of $200,000 without a single underwriting question.

What else besides grim disasters could make a young person difficult to insure? As it happens, spring breaks and youth mission trips are increasingly going to places similar to those the government had to pay me to visit. If you travel outside of what is loosely known as the ‘first world’ and don’t pick up a disease, the underwriters may surcharge you on general principle.

No road to riches
What about the savings aspect of personal life insurance policies – can’t you accumulate a good deal of money in a life policy with tax advantages? You sure can. But. Due to insurance law and several other factors, the accumulation in a policy on the life of a child, while substantial, will not be impressive until long after the parents have lost interest in the question. Say, about age 60: the child’s age being 60, I mean! You’ll be lucky to have accumulated as much as the total premium by the child’s age 20 or thereabouts. It would be better to use the money as an additional contribution to a 529 college savings plan, if college is the issue, or to a parent’s policy where it begins to work much earlier. So, when it comes to choosing between an individual policy on each child and a CTR for all of them, the cash value accumulation issue is a non-issue. Let the children convert or otherwise get their own policy when they reach adulthood and save their own money. You just can’t do it in an individual policy on a child in such a way that you’d be likely to see it.

An individual policy on a child, to do any good, would have to cost as much for each child as the CTR costs altogether, or more. So as soon as you have the second child, you’d be paying more. With each child, the ability to afford the premium decreases as the total premium necessary to insure all the children increases. Among other things, the young lady I mentioned first has three siblings and her father lost his job several years ago and has been unemployed for long enough that he would have had to drop his kids’ individual policies, if they’d had them, out of economic necessity. But they didn’t have costly individual policies. The mom in the family had a policy they could afford to keep and it had the CTR. Because a CTR costs less and insures all the kids.

Some people want to lock in a low rate for their kids, presuming that the younger the insured is when the policy is issued, the lower the premium will be. Not so. The mortality figures for children are low, but not that low. In fact, rates drop slightly as the initial age goes up. It would probably cost less for a person of 25 than for an infant of one. So if you reserve the insurance for the young adult and you are saving money. The CTR of $10,000 costs very little and the guaranteed $50,000 at maturity, if you wish to go that way, would cost what it would have cost two decades earlier. Why rush to spend money?

Once in a while, people with more-than-average means look for quite substantial life policies on their children. If they do that, they will be talking about much bigger numbers than the CTR can handle. For them, premium is not a problem. But, still, they won’t be saving much money in the first 30 years or so, and the question of underwriting will remain. And they will face certain new underwriting questions. Contrary to agents’ belief, underwriters are people, too and they don’t want to see a case they approved show up on Court TV or slightly disguised on CSI. A parent applying for a large policy on his child/children will be asked to fill out a financial form to demonstrate that the death of a child and the subsequent life insurance settlement won’t be the only thing making him rich. You have to be pretty well off to get a big life policy on a child.

In conclusion, the young lady who ambushed me last week confirmed me in my long-ago decision to try to use CTR on parents’ policies instead of individual policies on children…and that time really does fly!

About the author
Richard A. Aubrey CLU has been in the life insurance business for more than 30 years. His interest is in individual insurance, both life insurance and disability income coverage. A graduate of Michigan State University, Aubrey is at Piper McCredie Agency Inc. and can be reached at daubrey@pipermccredie.com