A Yen for Success 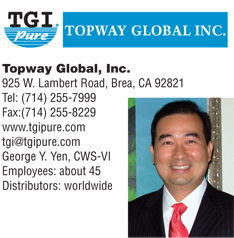 With $400 in his pocket, George Y. Yen came to the US from Taiwan in 1989 to attend Woodbury University in Burbank, California, armed with an undergraduate degree in international business from Chinese Cultural University in Taipei, two years in the Taiwan Marine Corps and a drive to succeed. The first major hurdle he faced was the language barrier. Yen spoke Mandarin Chinese, not English. In Taiwan’s school, there wasn’t a demand for English fluency, nor was there a program to teach the language.

His new environment was a paradox where he was awed by some things yet dismayed by others. Only two months after his arrival, Yen was robbed at gunpoint in front of his apartment by a group of teenagers who used their vehicles to block him from retreat. His military training made him realize the gun aimed at his face was not real; wisely, he didn’t take any chances. Yen handed over his wallet containing $40 and the robbers fled. His call for help was answered quickly, even though there was little that could be done to retrieve his property.

In spite of the language difficulties and working to pay tuition, he excelled scholastically. He joined the Chinese Student Association and later became President of the organization. Yen was one of the first Chinese students to receive the university’s President’s Award. He earned an MBA in information systems and was ready to start a career. Yen got an early lesson in business prospects as well. He bought his first car for $750 and sold it for $1,000 a year later. “That let me know I could make a deal,” he chuckled.

From this auspicious start, Yen progressed rapidly in his bid to capture a slice of the American dream. His future wife, Laura, was attending the University of California at Riverside, where she earned an MBA in accounting and finance. They had agreed to marry after reaching their educational goals. The Yens had met in Taiwan when they were pursuing their first degrees. Laura was an anthropology major at the National Taiwan University. After graduation, she worked in that field for a short time before moving to California in 1988 to seek a higher degree. Yen stayed in Taiwan to perform his mandatory military service and followed her the next year.

The water industry became a focal point for Yen thanks to a mentor and friend at Woodbury. The former President of the Chinese Student Association told him of her sister’s impending marriage to a man from Jakarta, Indonesia and difficulties of living in some parts of Asia. Of paramount concern was the lack of potable water, treatment equipment and supplies and the resulting poor health. Many risks could be reduced significantly with access to clean water and Yen had a solution in mind that would lead to his success, even though he didn’t know it at the time.

At first, Yen bought water treatment products and equipment and shipped them to Jakarta. Things went wrong, equipment didn’t work properly and Yen’s help was needed onsite. He flew to Jakarta many times to fix equipment and train people to keep the systems operational. Yen believed at least 10 people needed to be trained to maintain each system properly. While he was there, he learned about the region’s water systems and how the inhabitants lived. “It’s very different from here, how they use water. The equipment wasn’t right for the situation,” Yen said. The lessons he learned and his frustration with equipment failures prompted him to tackle the problems from his garage.

Yen enlisted the expertise of his brother-in-law who was struggling to find a job after earning his Ph.D. in material chemistry and engineering at Clemson University. His specialties were ceramic engineering and membrane separation technologies, just what was needed to develop their first five-stage RO system for Jakarta. This led Yen, his wife, her brother and his mentor from school to found Topway Global, Inc. (TGI®) in 1993. Committed to a Better Life became the company slogan, reflecting the group’s ideals and efforts to improve the quality of life on a global scale. “We started with three MBAs and one Ph.D., but no water experience,” said Yen. TGI joined the Water Quality Association (WQA) in 1994 and recruited Certified Water Specialists and other talented water treatment experts. In 1999, the firm moved to its present address in Brea, California and opened an office in Houston, Texas in 2004. The staff has grown to 45 members that are considered extended family rather than employees.

TGI is now one of the largest RO and water softener companies in California, with a worldwide distribution network. It offers all facets of RO, ultraviolet (UV) and deionization (DI) water treatment technologies, including product research and development, innovative design, advanced engineering and laboratory testing. The company has 26 NSF/ANSI (Standard 44) certified water softener models that include many of the Fleck and ProFlo controllers.

Yen believes there is room for improvement in the industry and that more development of existing markets should be encouraged. He cites growth of the bottled water segment as an example. While he was attending school, Yen noticed only a few feet of display space for bottled water products. Although that has grown to encompass entire aisles in many venues, there is room for more expansion. Another of Yen’s priorities is education for less fortunate areas, so the inhabitants can learn how to fix regional water problems. He also thinks the industry needs more people without water treatment expertise who can provide new business ideas and novel concepts. He would like to see bigger companies become more involved by bringing their technologies and vision to the industry.

In the face of ever increasing regulation, Yen believes it is important be an active part of the process to help the industry adapt to changing business requirements and TGI works with WQA and the Pacific Water Quality Association (PWQA). To achieve that end, TGI’s Vice President of Sales and Tech Support, Jerry Horner, has expressed an interest in joining the PWQA Board of Directorsr. Yen is optimistic about the future of TGI and the industry as a whole and his outlook on life and business is refreshing. Who knew how much a young business major from China could bring to the industry!

The future is wide open to a range of possibilities. What is not a consideration for TGI is merger or acquisition activity. Yen wants to keep things on a conservative track with consistent growth. He sees the opportunity to add more employees to the main office to maintain the company’s tradition of service excellence. Yen said, “I love the challenges of owning a business but growing too fast is not the best way to succeed. It’s not our goal.”