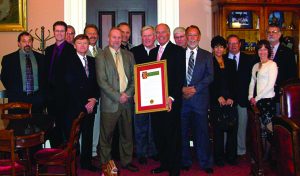 After a year of relative calm in terms of political action regarding self-generating water softeners, the first quarter of 2007 has begun with problems in nearly half a dozen California cities. As PWQA members headed to Sacramento for their annual Legislative Days, all knew it was an important trip.

President Terry Heckman (GE Infrastructure Water & Process Technologies) came up with the expedition’s motto, Clarifying the Issues, an apt slogan indeed. Throughout 2006, when towns or cities would attempt to enact anti-softener legislation, ever-vigilant PWQA members would reach out and open a dialog with the municipality, explaining the criteria for due diligence established by AB 334 and SB 1006, legislation hard won by PWQA members in years past. This process has successfully protected our industry and ensured the public’s right to choose softened water throughout the state.

Yet as the new year opened, PWQA phones began to ring with members reporting new bans being enacted by municipal leaders unaware of the legislation forbidding such action. Heckman’s hope for the two-day outreach to politicians and their staffs was that each member attending could clarify the issues, explain how we have been handling violations of these laws and how actions and policies in Sacramento affect our members and communities as a whole.

PWQA retained a new lobbyist recently and it was the first chance many had to meet and work with Pete Conaty. An experienced lobbyist, Conaty was instrumental in PWQA being honored by a resolution commemorating the group’s 50th anniversary. Read into the record of the state assembly, members were delighted to receive the beautifully framed scroll directly from Minority Floor Leader Dick Ackerman (R ) in his historic offices just off the rotunda.

More than 20 legislators were visited by the PWQA members in attendance. One—Senator Lou Correa (D)—visited us! Whether they chose to see those who represent their home, their office or their employees—or all three!—they had appointments made in advance through the lobbyist or PWQA. A role-playing training session gave each the confidence to state their case to their elected officials. A folder containing information about PWQA, its history, its members and the WQA as a whole enabled each PWQA member to leave file materials for future use in their legislator’s office.

An open invitation to all politicians to join us at a luncheon buffet on day two of our visit resulted in enlightening chats with Assemblyman Joel Anderson (R) who delighted members with his witty recap of political events; Assemblyman Doug La Malfa (R), a rice farmer from the northern part of the state with an agriculturist’s understanding of water; and Special Legislative Consultant Phil Nails who discussed both the history of water use as well as the current state of all things wet.

With the escalating number of attacks on our right to do business, PWQA recognizes the need for outspoken representation and that numbers get attention from those in elected office. Heckman and Conaty announced a new program for the coming months, in which members will be asked to ‘adopt’ a legislator—meaning they will become proactively involved with their local representatives at their local offices. Many politicians hold breakfast club meetings with their constituents; others have regular monthly soirees in different parts of their districts. In addition, PWQA will ratchet up their recruiting efforts in two simultaneous directions: first, to make good Heckman’s goal of 30 additional members this year; second, to bring in the numbers we need to protect the rights of all by offering complimentary affiliate memberships to those in ancillary water treatment organizations (other than the WQA).

If you do business in any of the western states, you owe it to yourself to get involved. PWQA is working to protect your right to do business—and make no mistake, there are those who would like to take that right away.