Lead is a contaminant of concern for many Americans. Public awareness of its harmful effects of lead is high. Sources in the environment are well known, including lead paint and lead pipes in older plumbing systems. Manufacturers of residential water treatment products strive to meet the needs of consumers wishing to treat any lead that may be present in their drinking water. These manufacturers typically offer products that conform to the NSF/ANSI Standards for drinking water treatment units for lead reduction.

Over the last few years, efforts have been underway to improve the repeatability of testing for lead reduction of media filters at pH 8.5 under NSF/ANSI 53. Round-robin studies led by NSF, conducted in 2004 and 2005, identified that different laboratories were getting different results when testing filtration systems produced from the same manufacturing lot.

Preliminary, informal investigations revealed the source of the different test results. The language in the standard allowed differing interpretations on how the lead challenge was prepared. This minor difference in preparation techniques made a very significant difference in the development of particulate lead in the test water. Products tested in a lab using nitric acid as a preservative for their concentration lead stock solution would pass the lead pH 8.5 test; the same product tested at a laboratory where nitric acid was not used would fail. After much investigation it was discovered that the difference between these tests was the amount of lead particulate produced.

ANSI standards process facilitates resolution
When this issue was brought to the attention of the NSF Joint Committee on Drinking Water Treatment Units, the Plumbed-In Lead pH 8.5 Task Group was formed to investigate this issue. Their first effort was to determine the appropriateness of having particulate lead present in the lead reduction pH 8.5 test. With this thought in mind, a literature search was performed to determine the presence of particulate lead in those water distribution systems that had issues with lead.

Validation of the protocol
Additional round-robin studies were performed to validate the consistency of results obtained with the new protocol. The first study focused on the ability of the laboratories to produce the intended challenge water when following the protocol. This round included participation by seven different labs, with a follow-up effort to develop additional information about repeatable preparation of the challenge solution by four of the seven labs.

A second round-robin study featured participation by six of the seven laboratories that participated in the first round. The focus of this effort was to test carbon block filters prepared from the same lot of carbon block production. The manufacturer of the carbon blocks designed and produced these blocks to marginally fail the test when particulate lead is present. The concept is that marginal failures are the situation in which a lack of repeatability of the test is most likely to reveal itself. If the test product is very robust and easily passes the test, potential differences in laboratory results are masked. Likewise, if the product causes an abject test failure, potential differences in laboratory results are difficult to identify.

As a result, several modifications were made to the protocol to improve the reproducibility of the method. These further refinements, summarized below, are incorporated in Figure 1. 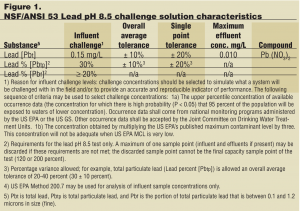 The consensus process works to improve the NSF/ANSI standards
The final revision to NSF/ANSI 53 was approved by the NSF Council of Public Health Consultants in February of 2007. This final approval validated the work done by the task group under the guidance of the Joint Committee. Significant amounts of research, a whole host of conference calls, intensive laboratory studies and the input of all stakeholder groups (including manufacturers, regulators purchasers of water treatment equipment) all came together to result in a test with significantly improved repeatability both within a laboratory and between laboratories. This effort is an excellent example of how the consensus standards process is intended to work: a great case study in achievements possible through cooperation and a common goal.

About the author
Rick Andrew is the Operations Manager of the NSF Drinking Water Treatment Units Program. Prior to joining NSF, his previous experience was in the area of analytical and environmental chemistry consulting. Andrew has a Bachelor’s Degree in chemistry and an MBA from the University of Michigan. He can be reached at 1-800-NSF-MARK or email: Andrew@nsf.org.