By Kelly A Reynolds, MSPH, Ph.D. 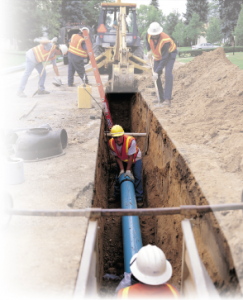 Drinking water distribution systems have been targeted for years as an area of concern with respect to ensuring safe delivery of drinking water to the end user. In the last On Tap (WC&P February, 2007) we examined the specific issues related to water distribution at the local level (i.e., premise plumbing of single households or businesses) where stagnation, temperature fluctuations and inconsistent periods of non-use contribute to deteriorating water quality. In this issue, we will focus on understanding the impact of the vast water distribution system, from source water treatment to premise plumbing delivery.

Infrastructure needs
Many have pointed out how interesting it is that we treat our drinking water with state-of-the-art municipal treatment technologies to meet stringent quality standards…and then send it to consumers in a leaky, dirty container (the distribution system). Numerous studies have been published on the negative impacts of a vulnerable distribution system1. In 2003, the US EPA completed its third evaluation of the drinking water infrastructure needs in the United States, estimating that an investment of $276.8 billion dollars is needed over the next 20 years for the installation, upgrade and replacement of infrastructure related to providing safe drinking water to the public2.

The distribution system includes approximately one million miles of pumping and piping and an estimated 154,000 finished water storage facilities. An excess of 13,000 miles of new pipes are installed each year in the US. Distribution pipe materials have a finite life span, depending on the type and age of the material and the water quality. Currently, 26 percent of the distribution pipes in the US are thought to be in poor condition. Although the life expectancies of common piping materials range from 75-120 years, pipes in the US are replaced at an average rate of once every 200 years.

Pipes in poor condition may be more likely to leak or break, allowing an increased potential for contaminants from the outside environment to enter into the distribution system. The number of documented main breaks is thought to be on the rise, considering that the annual number in 1970 was 250, compared to 2,200 in 19893. It is estimated that even well-managed water distribution systems experience about 25–30 breaks per 100 miles of piping per year. Using a value of 27 main breaks per 100 miles per year, Kirmeyer et al.4 estimated 237,000 main breaks each year in the US; however, an accurate estimate is difficult to come up with considering the variability between utilities. The public health significance of these breaks in the distribution system is not currently known. 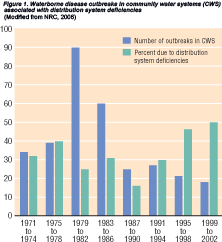 Causes and prevention
Water loss during delivery is one measure of the quality of the distribution system. In a study of 26 US utilities, reported water losses during delivery ranged from less than 10 percent to as high as 32 percent5. At least 20 percent of distribution mains are reported to be below the water table, but it is assumed that all systems have some pipe below the water table for some time throughout the year, thus providing an opportunity for intrusion of exterior water under low or negative pressure conditions. Pipes buried in soil are subject to contamination from the surrounding environment where animal and human waste can impact the water supply. A survey of water utilities in North America found that 28.8 percent of cross-connections resulted in bacterial contamination6.

Maintaining the hydraulic integrity (positive pressure) of water distribution is important given that insufficient pressure has led to disease epidemics worldwide. Negative hydraulic pressure creates a backflow of non-potable water into the potable water supply via back siphonage, where significant pressure drops siphon contaminants into the system at cross-connections or leakage points; or backpressure due to pressures in the system that exceed the supply pressure. Even minor pressure fluctuations create conditions of back siphonage and intrusion. Such events can occur during fluctuating water use patterns (i.e., in apartment buildings, during fire hydrant use, power outages, etc.).

Although water that is disinfected during treatment often maintains a disinfectant residual, this residual will decline relative to many factors, including the distance traveled, water flow velocity, residence time, age and material of pipes and water pressure. Several studies have shown that standard levels of residual chlorine, even when present in the distribution system of treated water, do not provide significant inactivation of microbial contaminants during intrusion events. Intentional contamination events in the distribution system are also a concern where public water supplies are potentially vulnerable to bioterrorism threats.

According to a CDC survey, cross-connections and back siphonage caused the majority (51 percent) of outbreaks linked to the distribution system from 1971-2000, followed by water main contamination (a collective 33 percent) and contamination of storage facilities (16 percent). (See figure 2).

Other post-treatment contamination events can occur during the storage of drinking water. Water quality may degrade in treated water storage facilities due to loss of disinfectant residual, increased temperature and external contamination from birds, insects, animals, wind, rain, algae, etc. Storage tanks are particularly vulnerable to contamination in the absence or failure, of a protective cover or barrier, open hatches and vents; however, birds have been known to contaminate even covered public water supply distribution storage tanks. 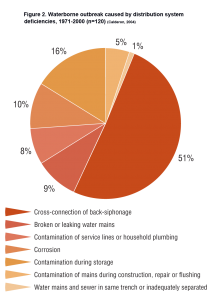 Conclusions
Awareness of the role the distribution system plays in the provision of safe drinking water to consumers is increasing and more data is expected to surface regarding associative health risks. As a result, future water quality improvements will likely address our distribution system needs. Because these water contamination events occur post-treatment, point-of-use water treatment devices are a consideration for reducing the risk of exposure to contaminants introduced in the distribution system.