Scale formation has long been a problem for those in the water industry, as well as in HVAC installations and many other commercial and industrial applications. Scale is a coating or precipitate deposited on surfaces that are in contact with hard water; water that contains carbonates or bicarbonates of calcium and/or magnesium is likely to cause scale. When water is heated or evaporation takes place or if there is a change in water pressure, scale minerals precipitate layers of rock-like deposits inside pipes, water heaters, appliances, equipment and fixtures.

Removing scale deposits is a billion-dollar industry. Numerous technologies have been used successfully over the past several decades to combat the effects of hard water and scale formation. These include water softening by ion exchange, reverse osmosis, polyphosphates, water jetting and sand or plastic-bead blasting.

One technology not mentioned above is physical water treatment (PWT) devices. The use of catalytic and magnetic devices in the treatment of water is controversial, to say the least. Performance failures of such equipment are not uncommon. Unfortunately, as with any new or relatively inexpensive technology, there are those who ride the profit wagon. Such entities often make false product claims and never cease to amaze with their creativity. Many have fallen prey to the wild marketing tactics and false promises of these devices. As a result, the entire industry suffers.

To compound matters, there has never been a protocol, or a set of protocols, established to create a certification by a recognized agency in the industry in the US. In fact, the Water Quality Association (WQA) first issued a position paper in 1978 in response to consumers’ and government agencies’ concerns. The WQA’s original position has been amended, reaffirmed and revised in several reports since then, all with the same conclusion. In July of 1994, the report concluded: “The WQA knows of no generally recognized scientific or technical evidence which proves magnetic, electromagnetic, or catalytic devices sold to treat water have any measurable physical or chemical effect on water quality. In fact, such evidence as WQA is aware of supports the position that these devices have no measurable physical or chemical effect on water quality.”

In spite of the WQA position, literally thousands of favorable testimonials from incredibly diverse applications and professionals across the globe continued to emerge about the success of this science. Inventors and manufacturers filed dozens of patents over the past three decades and several scientific abstracts have been written on the technology, all from accredited universities and by credible professors. The attack on this equipment has always been that the equipment wasn’t certified; the response (by both the reputable and the unscrupulous) has always been that the industry had not developed testing protocols nor certification standards for this type of equipment.

Over the past several years, various attempts to organize a committee or task force to set a standard for the PWT industry failed for one reason or another. However, momentum for a protocol recently picked up steam and the strongest committee to date was formed as a result.

In March of 2006 at WQA Aquatech in Chicago, the first meeting of a proposed ‘Task Force to Develop Test Protocols for Physical Water Treatment’ was set up with three purposes in mind. First, to establish an official definition for PWT; second, to discuss and propose test protocols to be used for the purpose of performance-based certification for PWT equipment and third, to determine the standards writing agency that would be responsible for developing the protocols into an ANSI standard.

The group unanimously agreed that the definition should exclude filtration types of equipment or any equipment that added chemicals to the water. At the same time, it should be broad enough to be open to potential new technologies yet to be introduced. The task force agreed to the following definition: A process utilizing a form of energy to alter the behavior of specific, targeted compounds or elements within water in order to accomplish a specific goal without significantly altering the water chemistry.

Secondly, the group considered the issue of test protocols. It was unanimously agreed that the protocols should be based on the application. The applications were divided into two groups: recirculation systems such as cooling towers and standard applications (whole facility type applications). Several parameters for the test protocols were discussed for presentation to the WQA. 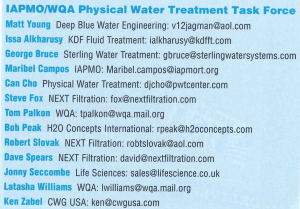 The final point discussed by the task force was the importance of the establishment of test protocols for PWT equipment. One member pointed out that PWT is a rapidly growing segment of the water industry and some form of certification is absolutely necessary now. The lack of testing and certification enables the unregulated introduction of equipment that, in many cases, does not work effectively. This environment serves only to discredit all PWT equipment. Since many of the companies selling, distributing and manufacturing this equipment are members of the WQA, this can only serve to discredit the organization and the industry as a whole. The task force unanimously agreed that the time for action had arrived.

In October 2006, the task force convened via conference call to create testing protocols for certification standards for PWT equipment. Tom Palkon of the WQA lab opened the meeting and introduced David Parke, of Independent Water Professionals, as Chairperson for the task force and Maribel Campos as the IAPMO (International Association of Plumbers and Mechanical Officials) representative. It was suggested that the task force consider several specific technologies for inclusion within the definition of PWT: mechanical precipitation, catalytic systems and electrical field generators to include magnetic systems. Palkon suggested that the group consider a subcommittee to draft a scope and purpose document for the task force. Campos presented the IAPMO IGC 91 (an ASME project on electrical anti-scale water conditioning appliances or high-density magnetics) as a possible starting point. This spurred a discussion of the differences between an IGC and an ANSI standard. Palkon strongly suggested that the task force focus on establishing an ANSI standard and bypass establishing a new or revised IGC. The question was raised by Parke as to whether revising or establishing a new IGC through IAPMO would in any way delay establishing an ANSI standard. Campos’ response was that creating a new IGC or revising IGC 91 would in no way delay the process of creating an ANSI standard, since the two would be identical.

Another conference call took place in late December of 2006 and a scope and purpose statement was unanimously accepted as written in the final draft. “The Purpose of the Task Force is to establish a protocol or set of protocols to be submitted to ANSI for certification of Scale Prevention equipment. This does not negate the establishment of an IGC through IAPMO as a part of the process. The Scope of standard shall include material safety, minimum performance requirements and structural integrity (if applicable) of scale prevention devices. The protocols should contain variations in testing to accommodate the intended field of use.”

Subcommittees were established for each of the areas listed in the document to review submitted protocol recommendations and suggest changes to these protocols in order to finalize a protocol for each area.
More meetings are scheduled in the near future, as there is a long way to go before finalizing PWT protocols. With the help of the author, WC&P will keep you updated on new developments as they arise.

About the author
Jeffrey M. Conway is CEO of Clearwater Enviro Technologies, Inc. of Clearwater, Florida. The firm is the world’s largest manufacturer of copper/silver ionization systems and electronic descaling equipment. The company was established in 1988; there are currently over 300 dealer/distributors in over 70 countries. Conway is a member of the PWT Task Force. Reach him at Clear Water Enviro Technologies, 1166 Kapp Driver, Clearwater, FL 33765; telephone (727) 562-5186 or by fax (727) 562-5187 or visit the website: Clearwater-enviro.com.