In the summer of 2006, a firm was selected to implement an arsenic, iron and manganese treatment solution for a residential development located in the rural outskirts of Boise, Idaho. Following the construction and sale of the first several large-scale residential homes on the tract, occupancy was halted by the Idaho Department of Public Health (DPH) following an analytical evaluation of the drinking water quality. It was identified that the groundwater supply contained several contaminants significantly exceeding the US EPA’s Drinking Water Standards (DWS). In particular, arsenic was detected at 690 parts per billion (ppb), iron at 2.4 parts per million (ppm) and manganese at 314 parts per billion (ppb). Other background water quality parameters used to evaluate treatment effectiveness are represented in Table 1.

In cooperation with IDPH and with local support the manufacturer designed and fabricated a 20 gallon per minute (gpm) redundant arsenic treatment unit equipped with pre-treatment for the removal of iron and manganese. The design incorporates patented arsenic-adsorbent cartridges allowing a small system footprint and ease of exhausted media replacement. The system was installed and made operational in early October, 2006.

Treatment design
Given the exceptionally poor water quality associated with the site, treatment for the removal of multiple contaminants was required. Based on years of experience in treating both iron and manganese and arsenic, the manufacturer concluded that the oxidation – precipitation – filtration technique for iron and manganese removal followed by arsenic adsorption represented the most effective solution for trouble-free longterm operation.

The iron and manganese pre-treatment system includes an oxidation step utilizing chlorine addition. Liquid chlorine with a metering pump would have been the choice in a commercial or industrial setting; however, liquid chlorine is a hazardous material and a leak in a residential setting can be serious. Therefore a dissolving feed, chlorine-based solid oxidant, certified to NSF Standard 61, was utilized instead.

Following oxidation, the source water is filtered through two (2) 13”x 54” fiberglass vessels containing oxidizing manganese oxide based media. The two vessels operate in parallel treating a designed flow capacity of 20 gpm. From the iron and manganese filtration vessel, the water passes through a particulate filter prior to entering the arsenic treatment system.

The simples configuration consists of two 12”x 56” vertical vessels, each containing four 42”x 5” arsenic treatment cartridges. The cartridges are packed with the patented zirconium-based adsorbent media. The media reacts both physically and chemically to effect rapid adsorption of the arsenic, typically requiring no pre-treatment and absolutely no backwash. Due to the elevated concentration of arsenic at the Idaho site, the two vessels are plumbed in a lead/lag configuration to provide redundant, precautionary treatment (see Drawing 1). 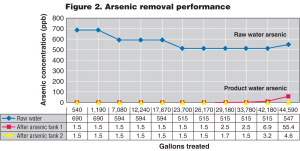 Results
The patented system was placed in operation and routinely monitored to determine effectiveness of treatment. As presented in Chart 1, the system was removed elevated levels of arsenic to non-detectable levels (<1.5 ppb), effectively removing arsenic to well below the US EPA DWS of 10 ppb. Additionally, the iron and manganese levels were removed to well within the range of the DWS.

As a result of the treatment system’s effectiveness, identical systems were installed in the constructed residential homes and Idaho DPH granted occupancy permits for each dwelling.

About the technology
Isolux Technologies, a division of MEI, has developed and patented a novel, zirconium-based adsorbent media for removal of arsenic and other heavy metals from drinking water. Isolux Technologies has been applying the media commercially via a patented cartridge system. Together, the media and the cartridge delivery system comprise the Isolux Treatment System. The Isolux Treatment System has been specifically engineered to address the needs of small drinking water systems, whether as POU, POE or central well-head treatment. Isolux has supplied the IsoluxTM Treatment systems to public, private and commercial water systems in over 21 states. Isolux provides engineering design, permit application support, equipment commissioning and operator training as routine services. Isolux Technologies is located at 968A Route 12, Frenchtown, NJ 08825; telephone 908/782-5800; fax 908/782-3380; website www.zrpure.com.

About the author
Jim Knoll is the Business Manager for IsoluxTM Technologies. He can be reached at 908 797-7480 or by e-mail at [email protected]. He has a bachelors of science in Chemistry and a Masters in Business Management. Knoll has spent over 10 years as an environmental professional, managing compliance and remedial activities for the manufacturing community. For the past eight years, he has spearheaded a team of research chemists and engineers focused on the treatment of industrial and drinking water for the removal of heavy metals and radiological contaminants. Email him at [email protected].