Analyzing the Lab: The Analysis of Chlorine Induced Disinfection Byproducts

Introduction – the role of chlorination
Much has been written about the benefits of adding chlorine (chlorination) to the drinking water supply. The role of chlorination in protecting drinking water supplies from waterborne infectious diseases cannot be overlooked as one of the most significant developments to advance human health. Since the early 1900s, developed countries like the US have been adding chlorine to the drinking water supply. The result was a dramatic reduction (virtual elimination) of waterborne diseases such as dysentery, cholera and typhoid. The goal of disinfection is to kill microbiological organisms that cause disease and chlorine is so effective because it provides a broad-spectrum killing capability. It is also used to control taste and odor problems by oxidizing naturally occurring substances such as foul smelling algae secretions and odors from decaying vegetation.1 Also, chlorine provides residual protection to inhibit microbial growth after the treated water is introduced to the distribution system. In other words, it keeps working from the treatment plant, through the distribution system pipes, until it reaches the consumer at the tap.

The remainder of this article will deal with a detailed description of these DDBPs and the methods used by a modern drinking water laboratory to analyze for these compounds.

Formation and analysis
As we have already stated, chlorine reacts with natural organic matter (NOM) to form trihalomethanes or haloacetic acids. So, what is a trihalomethane or a haloacetic acid and how are they formed as disinfection byproducts? First off, chlorine is a highly reactive gas with a chemical formula Cl2. It reacts readily with natural organic matter such as humic acid or fulvic acid in ground or surface water to form trihalomethanes or haloacetic acids. The word trihalomethane can be divided into three parts. First, tri refers to three of something. In this case, the three things are halogens, thus halo. Halogens are elements listed in the periodic table and the four most common are fluorine, chlorine, bromine and iodine (see Figure 1). 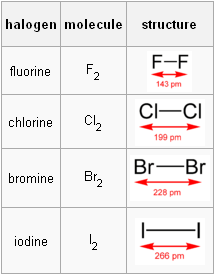 Finally, methane refers to the simplest organic molecule made up of a single carbon atom with four hydrogen atoms attached. The chemical formula for methane is CH4. The methane building block comes from the naturally occurring NOM and halogens come from the chlorine added to the water during disinfection. A naturally occurring halogen like bromine can also contribute. So, a trihalomethane is a molecule with three halogen atoms and a single hydrogen atom attached to a single carbon atom. The most commonly formed trihalomethane is chloroform (also called trichlormethane, or methyl trichloride)

The four trihalomethanes that are regulated by US EPA under the Stage 1 DBPR are chloroform, bromodichloromethane, dibromochloromethane and bromoform. All are made up of three halogen atoms and a hydrogen atom attached to a single carbon atom.

As stated previously, the Stage 1 DBPR established an MCL for total concentration of the four trihalomethanes at 0.080 milligrams per liter. None of the trihalomethanes are regulated individually.

The analysis of THMs and HAAs
Both methods for the analysis of THMs and HAAs use chromatography, specifically gas chromatography. What is chromatography? Simply stated, chromatography is a separation technique used to isolate specific analytes from one another using columns packed with specific types of media (the stationary phase). The analytes are pushed along by a liquid or gas (the mobile phase). A gas chromatography column is typically made from glass or fused silica. The column can be 30 to 75 meters long, with an outside dimension from 0.32 to 0.75 millimeters with a stationary phase film thickness from one to three microns. Compounds are separated and detected using either a mass spectrometer or an electron capture detector.

There are several methods referenced for the analysis of THMs. One of the most widely used methods is US EPA 524.2. A brief summary of the 524.2 method below will be followed by a more detailed description.

In the 524.2 method, volatile organic compounds with low water solubility are purged from a water sample by bubbling an inert gas through the aqueous sample. Purged sample components are trapped in a tube containing suitable sorbent materials. When purging is complete, the sorbent tube is heated and backflushed with helium to desorb the trapped sample components into a capillary gas chromatography (GC) column interfaced to a mass spectrometer (MS). The column is temperature programmed to facilitate the separation of the method analytes which are then detected with the MS. Compounds eluting from the GC column are identified by comparing their measured mass spectra and retention times to reference spectra and retention times in a data base. Reference spectra and retention times for analytes are obtained by the measurement of calibration standards under the same conditions used for samples. Analytes are quantitated using procedural standard calibration. The concentration of each identified component is measured by relating the MS response of the quantitation ion produced by that compound to the MS response of the quantitation ion produced by a compound that is used as an internal standard. Surrogate analytes, whose concentrations are known in every sample, are measured with the same internal standard calibration procedure.4

The most widely used method for the analysis of haloacetic acids is US EPA 552.2, Determination of Haloacetic Acids and Dalapon in Drinking Water by Liquid-Liquid Extraction, Derivitization and Gas Chromatography with Electron Capture Detection.

The analysis of HAAs by US EPA 552.2 requires a complex liquid-liquid extraction using methyl-tert-butyl-ether (MTBE). The haloacetic acids that have been partitioned into the MTBE phase are then converted to their methyl esters (derivitization) by the addition of acidic methanol. The acidic extract is neutralized by a back-extraction with a saturated solution of sodium bicarbonate and the target analytes are identified by gas chromatography in combination with an electron capture detector.5

Along with samples that are to be analyzed, the laboratory has to run quality control samples to determine if method analytes or other interferences are present in the laboratory environment, the reagents, or the instruments. Laboratory Reagent Blanks (reagent water treated exactly the same as samples) are use for this purpose. Laboratory Fortified Blanks (known quantities of method analytes added to reagent water) are also prepared and analyzed to determine whether the methodology is in control and whether the laboratory is capable of making accurate and precise measurements. Internal Standards and Surrogate Analytes are also used in the quality control process to assure that results are accurate. A detailed explanation of all the quality control steps required would be too lengthy, but needless to say, the quality control procedures required to operate a modern drinking water analysis laboratory are extensive. 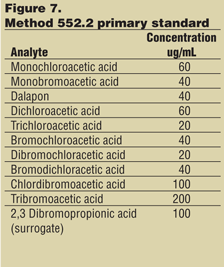 This primary dilution standard is used to prepare calibration standards, which comprise five concentration levels of each analyte with the lowest standard being at or near the method detection level for each analyte.[7] A typical calibration curve for monochloroacetic acid is shown in Figure 8.

After the analysis is complete, data is reviewed and results are calculated. As is the case with both the 524.2 and 552.2 methods, analytical results are determined based on two criteria. First, compounds are identified after the chromatography run by peak retention time. Second, concentration is determined by measuring peak areas as compared to the calibration standards for each of the analytes. A typical chromatography run for method 552.2 is shown in Figure 9.8 The data analysis and calculation procedures are very specific for each method and most modern instrumentation makes use of sophisticated software for this purpose. 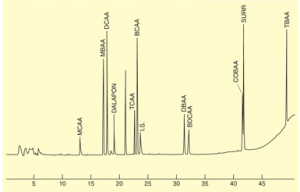 Conclusion
Chlorine has proven itself to be a powerful weapon in the battle against waterborne diseases. The benefits have been documented time and time again. The formation of disinfection byproducts such as trihalomethanes and haloacetic acids as a result of the use of chlorine was an unanticipated consequence and US EPA will continue to regulate the amount of these disinfection byproducts in drinking water. Modern drinking water laboratories will continue providing the necessary analytical services for monitoring. Hopefully this article has provided the reader with a better understanding of the generic terms trihalomethane and haloacetic acid, their formation and methods of analysis.

About the author
Stephen R. Tischler is Vice President of Business Development for National Testing Laboratories and a member of the 2007 WC&P Technical Review Committee. Tischler is responsible for directing all sales and marketing activities for the organization, as well as contributing to operational and strategic planning. Prior to working with National Testing, Tischler held various senior management positions in the chemical manufacturing engineered plastics manufacturing and laboratory services industries. Early in his career, he worked as an analytical chemist for NASA. He has a BS Degree in chemistry from John Carroll University (University Hts., OH) and an MBA from Baldwin-Wallace College (Berea, OH).