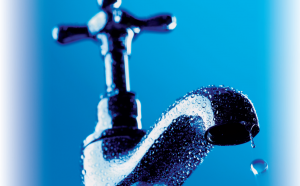 The quality of water at the end use is impacted by numerous and varied factors including source water type and quality, age of the distribution system, climatic events and even consumer use patterns. Therefore, providing high quality drinking water at the tap requires a multi-barrier approach aimed at source water protection, source water treatment and reliable distribution. Each of these steps are monitored and controlled by municipal water treatment standards and guidelines; however, what happens to the water quality beyond the service connection at individual sites is not as well understood. New reports of water quality deterioration in the plumbing of residential or commercial buildings, known as premise plumbing, pose a question: Just what is present in our pipes?

Premise plumbing defined
Drinking water is generally supplied from a surface, ground or mixed water source. Following collection and appropriate treatment of municipal water supplies, drinking water is transmitted to end users via a distribution system that includes pumps, piping and storage networks. In the US, there are approximately 154,000 finished water storage facilities and a million miles of distribution system networks. Premise plumbing increases the length of water distribution to six million miles

Premise plumbing is defined as the point from the service connection line to the public distribution system and extending through schools, hospitals, businesses and private buildings. The US Environmental Protection Agency (US EPA) has regulations regarding lead and copper contaminants in the premise plumbing water, but there are no regulations regarding other potable water quality parameters after the service connection. Beyond the property line, therefore, water quality is primarily the responsibility of the consumer.

A report by the National Academy of Sciences identified several characteristics associated with premise plumbing and water quality:

Although water is not expected to be sterile following adequate municipal treatment, it should be free of pathogens (i.e., disease causing microbes). Pathogens, however, are known to enter the distribution system via breaks or leaks in the system and poor hydraulic integrity (i.e., lack of positive pressure). Negative hydraulic pressure can create a backflow of non-potable water into the potable water supply. Contaminants are siphoned into the system at cross connections or leakage points. Such events are common due to variable delivery and use patterns and during power outages. Compared to the general distribution system, water in premise plumbing has longer residence times, variable and lower flow conditions, higher temperatures and increased stagnation. The introduction and sometimes re-growth of harmful microbes under these conditions leads to an increased risk of disease in the end user.

Deteriorated water quality
Contamination of drinking water, post-treatment, (i.e., in the distribution system) has emerged as a primary cause of documented waterborne outbreaks in the US. The overall number of outbreaks associated with community water systems has decreased in the last decade, in part due to increased regulatory requirements and control; however, the proportion of outbreaks associated with distribution of the water has increased (Fig 1).

Once municipal water is delivered at the end use, the homeowner then assumes responsibility for the supply. Bacterial colonization of pipes, hose connections, faucets and fixtures is well documented. Levels of bacteria may increase by several orders of magnitude by the time it is dispensed from the tap. While the organisms studied were not pathogens, they do provide insight as to growth potentials in premise plumbing.

Organisms may be introduced into premise plumbing via re-growth, backflow and intrusion events. In 1995, a norovirus outbreak was documented affecting 148 high school students. The school was connected to a community water supply, but water from a flooded football field was back siphoned into the premise plumbing via submerged hoses. Another school outbreak occurred in 2001 following chemical contamination of the drinking water via a cross connection with an air conditioning unit containing ethylene glycol (CDC data). Reports of premise plumbing-related outbreaks are primarily from buildings where larger populations are exposed. When small populations are affected, such as in individual households, outbreaks would likely not be reported.

Identified risks
HPC bacteria are commonly isolated from premise plumbing and are known to grow in distribution systems, but a vast collection of scientific evidence supports that in the absence of fecal contamination, HPC bacteria are not directly related to health risks in the general population. Severely immuno-compromised individuals may be the exception, but all are exposed to much greater levels of HPC in food (WHO, 2002).

Other bacteria common to premise plumbing are potentially harmful, including Legionella, mycobacteria and Naegleria. Legionella bacteria are known to persist and re-grow in premise plumbing. Legionella outbreak data is now available, since the organism was added to the CDC outbreak surveillance list in 2001. During the first survey period (2001-2001) six Legionella outbreaks were documented, all from institutional or large building environments. Legionella is now the single most common causative agent in drinking water outbreaks identified and researchers have isolated Legionella from up to 33 percent of tap water samples surveyed. Respiratory infections from this bacteria may lead to death, especially in elderly populations. 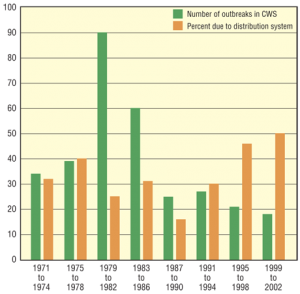 Mycobacteria are also found in water. Of particular concern is a group of chlorine resistant bacteria known as Mycobacterium avium complex (MAC). MAC infections are are the second leading cause of death in HIV positive patients, where between 25-50 percent experience severe or fatal infections. Researchers have found that approximately 20 percent of tap water samples test positive for MAC where it effectively grows in biofilms of the distribution system. Although rare, MAC infections in populations other than the immuno-compromised has been documented.

Naegleria are free-living protozoa known to feed on bacteria and biofilms in the distribution system. They may even offer a protective barrier for some bacteria (i.e., Legionella) by internalizing the bacteria without digesting it. Naegleria is not known to be a problem with consumption but several fatal outbreaks occur each year due to recreational exposures. In 2002, two five-year old Arizona children died from Naegleria infections. Surveys of their household environments showed that the protozoa were detected in household faucets and sinks. The transmission route was presumed to be from a bathtub exposure.

Long residence times in premise plumbing can result in rapid decreases in disinfectant residual and lead to growing populations of opportunistic bacteria (those primarily causing disease in susceptible populations, i.e., the immuno-compromised).

Recommendations
There is little published research regarding pathogen occurrence, growth and survival specifically in premise plumbing. Although limited data is available regarding HPC (heterotrophic plate count) bacteria, these bacteria generally are not a human health risk and offer little information relative to the associative prevalence of harmful microbial populations.

Pipe materials appear to be a factor in bacterial colonization and re-growth in the distribution system. Plastic faucets have been shown to harbor higher numbers of specific bacteria (i.e., coliforms) compared to metal however iron pipes appear to support a higher diversity of bacteria compared to PVC surfaces*. We do not know the extent of the public health risks associated with microbes and their ecology in distribution systems or whether or not diversity and selectivity of specific bacterial groups is preferred. In fact, several studies have shown that HPC bacteria are antagonistic to pathogens when they are introduced to the established microflora of premise plumbing.

Information is not currently available regarding the changes that occur in microbial populations in the premise plumbing compared to the distribution system. While it is documented that 51.4 percent (4/7) of the waterborne outbreaks in community water systems in the US from 2001-2002 were related to problems in the distribution system, no information is available regarding exposures to harmful organisms in premise plumbing. This is surprising considering the increased potential for pathogen survival, growth and introduction. If waterborne disease outbreaks occur from problems in premise plumbing, they are unlikely to be detected or reported due to the small population affected (i.e., a single household).

Overall, these data gaps mean that very little is known about the quality of water that consumers are actually drinking out of the tap. In order to evaluate health risks and mitigation approaches, much more research is needed to determine the types, numbers, growth and disease potentials of the microbial communities at the point of consumption.