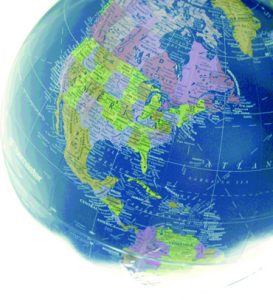 The issues
Based on my observations, North Americans seem much less likely to completely trust the municipal authorities to provide reliably safe drinking water on a continuous basis. This is definitely not a fact, but a perception and perception absolutely drives the POU/POE drinking water market. (POU means point of use, which is treatment at the tap or faucet. POE, point of entry, is treatment of the entire household supply.)

North Americans have an innate skepticism about the quality of their water. I believe that much of this is fueled by the media, which publicize (and often exaggerate) any story about a pathogenic organism outbreak or some study that points out a newly discovered health-related contaminant, etc. The Dutch, on the other hand, seem to recognize that it is the duty of the drinking water authorities to supply safe, high quality drinking water, no questions asked.

A 2002 national survey of Americans revealed the following:

The number of US households using POU treatment technologies ranges from 32-41 percent, depending upon the organization making the survey. In various surveys, consumers revealed the following motivations for either treating water at the tap or purchasing bottled water:

Bottled water sales in the US have increased by approximately 13 percent per year for the last five years, even though the average cost is about $90 per gallon, compared to less than $0.01 a gallon for tap water.

The United States Environmental Protection Agency (US EPA) has adopted a very objective and balanced view towards POU and POE water treatment devices (provided they have undergone performance validation testing and are not subject to outlandish claims). My European experience, limited primarily to the Dutch authorities, is that they categorically claim that no technology will work and could actually ‘make water worse’! (As a disclaimer, this is based on a protracted conversation with a highly placed official some years ago, along with some publicity released by the municipal water suppliers.)

Interestingly, in the US, there is a trend towards the municipal authorities actually specifying POE or POU treatments for certain health related contaminant issues.

A case in point is arsenic. The US EPA Arsenic Rule, which went into effect on January 23, 2006, mandates the maximum contaminant level (MCL) of 10 µg/L (from 50 µg/L). Since arsenic is only a health hazard if it is consumed, treating it at the entrance to the house, or more appropriately, at a single drinking water tap makes good sense.

In North America, concern is becoming heightened regarding contamination of water supplies in the distribution system from the water treatment plant to the home. Recent indications of lead contamination in certain parts of the US, as well as the ubiquitous problem of biofilms releasing bacteria or other contaminants, underscore opportunities for POU and POE treatment.

The total US residential water treatment market (POU plus POE) was estimated to be $802 million per year in 2004, with $160 million of that attributed to POU reverse osmosis (RO) units. By 2008, the total residential market in the US is expected to reach more than $1 billion.

As many parts of the US, particularly in the southeast and southwest, already have segregated water distribution systems (one for potable water and the other for irrigation), a mindset exists with many consumers regarding dual water supplies.

In the future, I believe that there will be a number of applications where it is more cost effective to install POU devices to treat the water at a single tap in the house than to treat the entire municipal supply. Although this involves the added burden of residential monitoring to ensure ongoing compliance, the fact that only about one percent of residential water is actually consumed make the economic advantages of this approach very clear. It is estimated that in certain cases, the cost savings of utilizing POU/POE technologies over municipal treatment could amount to 50 percent.

As the European Union (EU) continues to harmonize drinking water standards, I believe that they, along with the World Health Organization (WHO) will respond to increasing public pressure and increasing treatment costs and will become more inclined to consider POU and POE treatment in certain applications.

The technologies
With regard to treating water supplies to remove health-related contaminants, if the contaminant is volatile, such as radon or a volatile organic chemical (VOC), or may present a problem if in aerosol form, it should be treated with a POE technology. This is to prevent inhalation during bathing or showering, or other activities where a person might be exposed to running water.

If the contaminant only represents a threat if ingested, POU treatment is usually sufficient, provided that all drinking and culinary water is taken from that particular tap.

16 percent of Americans get all of their household water from private wells, which are not covered by the Safe Drinking Water Act. Often, the local health department will require that a new well be tested for bacteriological and nitrate contamination, but that’s about all. As a result, the vast majority of these consumers only react to aesthetic concerns with treatment technologies. These concerns are usually the result of high hardness and perhaps iron and manganese. In those parts of the country with these water problems, the municipal water providers often do some treatment, but often not enough to completely satisfy most consumers. Whereas softeners will typically remove low concentrations of iron and manganese, higher levels require special filtration technologies.

Softeners are the lynchpin of the residential water treatment industry, being the first significant POE product, introduced in the mid-1930s. Although now considered mature and perhaps somewhat archaic, water softener technology has undergone several changes recently. The perceptible change in consumer attitude regarding conservation and reuse has led to reexamination of the sodium chloride discharges associated with household softener regeneration.

Several years ago, the US water treatment industry was hit with a series of local proposals — in California, Texas, Michigan, Montana and other states, to ban or severely restrict the use of water softeners in an effort to reduce chloride discharges into the environment. The industry went to work to address these proposals. The consensus today is that the industry has met with some degree of success, but the issue is by no means resolved.

With increasing emphasis on water reclamation and reuse in the arid areas of the US southwest, the softener ban debate takes on added importance. Additionally, there are

The older valve technology regenerates a softener on a preset time interval no matter how much water the customer has used. The demand initiated regeneration (DIR) unit, however, regenerates only after the flow of a preset volume of water. Even newer technology, based on sensors monitoring water chemistry of the treated water, initiates regeneration when the unit approaches chemical exhaustion. DIR or sensor-initiated units typically produce 50 percent less salt discharge than the older timer units. 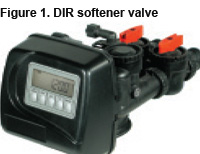 Obviously, incoming water quality will dictate the specific treatment technology required. No two water supplies are exactly the same anywhere in the world; each application must be analyzed for its own characteristics.

For those supplies with unacceptably high sediment (suspended solids) levels, the most widely used technology is a media filter tank, as illustrated in Figure 3.

The trend today is towards a single medium to effect filtration, such as Filter Ag material. This material will filter out solids down into the 5-15µ range and the valve provides for automatic backwashing.

For chlorine removal, the same tank, as illustrated in Figure 3, can be filled with granulated activated carbon (GAC).

In the specialty products area, arsenic removal technologies have exhibited the highest growth rate because of the recently mandated US EPA Arsenic Rule. There are a number of technologies that perform very well for arsenic removal. These include adsorption media (granular iron media, activated alumina, ion exchange, among others) coagulation/filtration and RO. For POE applications, the adsorption media are most appropriate. Because it is a regulated contaminant and removal to below the MCL of 10 µg/L must be ensured, two tanks in series are recommended.

A new technology entering the North American POE market is microfiltration (MF). Comprised of polymeric or ceramic membranes with pore sizes below one micron, and about the size of a typical filter media tank, this technology is directed at those applications where the consumer is primarily concerned about microorganism contamination. This concern has been heightened in recent years as the result of the 1993 ‘Milwaukee Outbreak’ of cryptosporidiosis, where 400,000 people got sick and 104 died. As a direct result of this, the US EPA developed the Long Term 2 Enhanced Surface Water Treatment Rule, enacted last year, requiring municipal water works to ensure that the turbidity of their finished water is below 1.0 NTU (nephelometric turbidity units). MF is the most widely used municipal treatment technology to meet this and I predict that within 10 years, virtually all municipal water treatment plants in the US, treating a surface water source, will be using MF.

POU treatment utilizes many of the same technologies as described above for POE except for softening and iron and manganese removal. The largest volume of devices sold are sediment and GAC cartridges, to the tune of many millions each year, ranging from undersink to countertop to pitcher to refrigerator (in the door) installations. 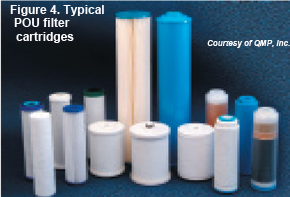 The POU technology that is probably in second place with regard to North American sales is RO. At least 300,000 units are sold every year in the US alone, with a growth rate of 10-15 percent a year. This technology is very well known, having been on the scene for at least 40 years. RO not only removes dissolved salts, but also removes suspended solids, dissolved organics and most microorganisms. With the exception of distillation, RO is the most complete contaminant removal POU technology. 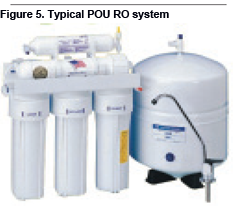 Recent improvements in RO technology include the GE Water Merlin™ unit (Figure 6), which uses two large RO membranes capable of producing up to 0.5 gpm (113 L/h) of purified water, thus eliminating the need for a storage tank. Another new development is a storage tank design that uses water (rather than air) to force purified water out of the tank to the tap (see WC&P July 2006).

Conclusions
In summary, POE and POU technology sales in North America are very much alive and well. Concomitant with sales growth is the development and introduction of new technologies, components and system improvements.

About the author
Peter S. Cartwright, President of Cartwright Consulting Co., Minneapolis, is a registered Professional Engineer in Minnesota. He has been in the water treatment industry since 1974, has authored almost 100 articles, presented over 125 lectures in conferences around the world and has been awarded three patents. Cartwright has chaired several WQA committees and task forces and has received the organization’s Award of Merit. He is the Technical Consultant to the Canadian Water Quality Association. A member of the WC&P Technical Review Committee since 1996, his expertise includes such high technology separation processes as reverse osmosis, ultrafiltration, microfiltration, electrodialysis, deionization, carbon adsorption, ozonation and distillation. Telephone: (952) 854-4911; fax: (952) 854-6964; email: pscartwright@msn.com or visit his website www.cartwright-consulting.com.