In the Path of Paul Revere—But No Midnight Rides 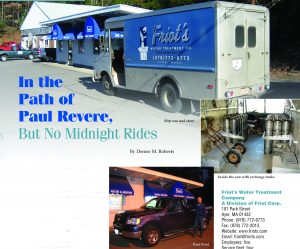 Ayer, Massachusetts, located about 35 miles northwest of Boston in the historic Nashoba Valley, is known for its appreciation and protection of natural resources and its focus on the well-being of families and the community as a whole. It is also home to Friot’s Water Treatment Company, a quietly successful family-owned corporation. As the only local business offering exchange tank service, the company provides treatment options to consumers in a 25-mile radius service area that includes central Massachusetts and southern New Hampshire.

The company opened its doors in 1971, when Massachusetts Institute of Technology graduate Alan Friot, an electrical engineer, purchased a service exchange tank business located in an industrial park in Boxborough. Shortly after the purchase, the firm expanded into the sale and rental of automatic equipment. Later, Friot opened a retail store in Ayer.

The success of the business allowed for construction of a new batch regeneration plant for the exchange tanks a few years later. The original facility was shut down when the new plant began full operations in 1982. To further improve the quality of equipment, all of the original galvanized exchange tanks were replaced with stainless steel around 1995.

The company uses a stepvan, pickup truck, car and forklift to provide regularly scheduled service to its several hundred route customers, the majority of which are homeowners with private wells.  To keep costs as low as possible, the company purchases salt by the truckload and stores it inside the plant building.

The family that works together
The enterprise is a success story that spans two generations. Friot and his wife Helen work primarily in the retail store, answering technical calls from customers and helping out with office duties while daughter Suzanne Gagnon works part-time as the office manager. Son Paul, company President and spokesman, primarily handles sales and services calls for automatic treatment systems in addition to running the service route operations (which he has done since high school). He took a break from managing the service routes in the ‘80s and returned in 1992. The younger Friot is also a successful inventor, holding a patent (2002) for a point of entry (POE) arsenic removal process. (See James Hunt’s review of Friot’s process in WC&P, October 1997). 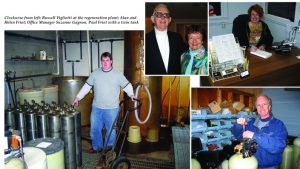 A very active WQA member, Friot holds certifications (CWS-VI, CI and CSR) and is the Regent for Massachusetts. He is also a member of the Onsite Wastewater Issues Task Force and the NSF Arsenic Task Group, though the latter has seen little activity in recent years. Friot says membership and certification in WQA is important, as it helps keep the industry professional and technically competent. He also believes WQA is a voice representing the industry, providing scientifically based information to state and federal agencies dealing with water quality issues that can affect treatment businesses.

Employee Russell Vigliotti is the only non-family member. He has worked for the firm, off and on, for many years. Vigliotti currently serves part-time in the exchange tank regeneration plant and delivers pallets of salt.

Local issues, local water
In certain areas of new construction, where the local board of health is concerned about the amount of sodium added to the water via automatic water softeners, potassium chloride is used instead of sodium chloride. (Resin comes in sodium form from the manufacturer and the softener needs to be run through a series of regenerations to convert it to the potassium form before the sodium level in the softened water is tested.)

The most common water problem is high iron (5-10 mg/l) as well as manganese, hardness, corrosive water and sulfur smell. For iron and manganese removal, a water softener with either a cartridge or backwashing sand filter is frequently recommended. Arsenic removal has become a larger part of the business in the last decade, with levels up to 350 ppb being found in some customers’ water.  Paul’s removal arsenic removal process and POU equipment are offered as treatment options.

Discharge from the regeneration of softeners, filters, etc., into septic systems is an ongoing issue that is also addressed. State regulations appear to prohibit the discharge from filters and purifiers to septic systems, creating controversy about whether brine should discharge to the septic system or to a drywell – or simply outside above ground.  Discussion with each customer about the pros and cons of septic discharge versus the other options helps them make informed decisions.

Customers, with test results in hand, often request an estimate for treatment options over the phone. The company prefers to test the water onsite along with reviewing the previous report. Usually, similar test results are found, but not always. Reasons vary: some wells do not produce consistent water quality, the original sample was drawn after the well sat unused for a significant span of time or some other anomaly occurred. Two mottos (‘Assume nothing’ and ‘The test of a system is not can it work, but how can it fail’) guide the process of problem analysis, reducing chances of something being overlooked.

Innovative solutions
The company approaches water quality issues with a unique style and Yankee ingenuity. They use temporary hookups if there is no initial clear cut solution. This provides a testing platform for the customer’s system to determine what will resolve the problem. The tank is connected using two simple washing machine hoses, a second spigot (plumbed in after the main shutoff) and an exchange tank filled with softener resin, filter-ag or other media; sometimes a cartridge filter is also used. One noticeable drawback with the method is a significant pressure drop created by using the hoses, but it temporary and doesn’t cause serious concern. Consumers are given a comprehensive view of available options before investing in a system, which creates a greater customer service experience.

Small is good
Friot’s Water Treatment Company is very much a small business with a philosophy of doing what is best for consumers as the top priority versus what might be more profitable for the business. It has earned the trust of the community and frequently is on a first name basis with customers. There are no aggressive marketing or high-pressure sales tactics; it relies on word-of-mouth advertising for about 75 percent of new customers. The balance comes from Yellow Page advertising, a company web site and walkins/drivebys at the store.

For the foreseeable future, Friot said the firm plans to continue with the current arrangement. It deliberately remains small to try to maintain a higher level of technical expertise and customer service.