This is Not your Father’s Oldsmobile: Today’s RO

It’s the time of year when auto shows are displaying the new designs and features that are coming down the line in the ‘08 models. It’s also the season for the classic car shows—here in Phoenix, the annual Barrett Jackson auction is taking place, while back in Detroit, the classic auto show that always follows the North American International Auto Show (a part  of Detroit, that and the Woodward Dream Cruise, that I truly miss) is unfolding.

Cars and reverse osmosis (RO) systems have little in common; however, they do share a number of leaps in improved technology and capability over the past decades. Recently, through various US Environmental Protection Agency/Environmental Technology Verification (US EPA/ETV) projects, decentralized water treatment and state R&D projects, there has been a great deal of information provided on today’s RO membranes and their ability to reduce/remove different contaminants from water. 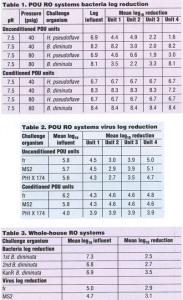 Brief history
RO grew out of the ‘go to the moon and make the desert bloom’ technology ideals of the late 1950s. Initially, the main goal with RO membranes was the desalination of brackish and sea waters in order to provide fresh water for desert coastal cities such as those in southern California. Often attributed to research coming out of UCLA, some of the first successful desalination plants were built in the mid 1960s in California.

RO membranes have what is considered to be the smallest pore structure, with pore diameter ranging from approximately 5 to 15 Å (0.5 nm to 1.5 nm). Due to the extremely small size of RO pores, only the smallest molecules are capable of passing through the semi-permeable membrane. Additionally, RO membranes have a high rejection rate for inorganic salts and charged organics due to charge repulsion established at the membrane surface.

In the past 30 years, RO technology has been brought into the house through small point of use (POU) systems that fit under the sink. Over the years, there have been a number of efficiencies developed (like the automatic shut-off valve) leading to a greater commercialization of residential RO use. Another major advancement in home RO technology has been the development of a zero-waste residential RO unit, which addresses one of the larger negative concerns with RO: the creation of rinse water that is typically sent to the drain. 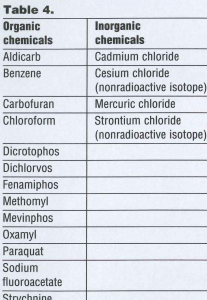 New testing developments
Over the past year, we have subjected RO systems, including larger commercial units, whole-house units and POU systems, to a number of different tests. Each was designed to evaluate a different ability of the RO system and its capabilities at removing or reducing various contaminants. The following is a review of some of that testing.

Biological contaminant testing
Both POU and point of entry (POE) RO units were tested under the US EPA/ETV Program for biological contaminants in the water. The purpose of the program was to evaluate RO systems performance under a simulated intentional or incidental biological contamination event. In the projected scenario, it was decided that the threat would be over a short, defined moment in time; therefore, the test was conducted only over a 24-hour period. 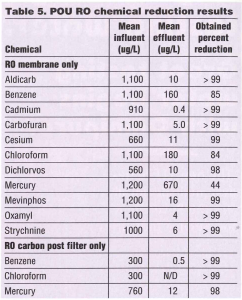 In order to determine the effect of membrane conditioning, two separate groups of tests were conducted. The first group was conditioned for 25 days prior to being exposed to the challenge contamination; the second group only received the initial 24-hour conditioning. Additionally, the systems were evaluated at inlet pressures of 40 and 80 psi in order to establish if there is a difference in rejection capabilities based upon incoming water pressure. All testing was conducted on the RO membrane only; all pre- and post-filtration was removed prior to the test. Tables 1, 2 and 3 illustrate results of this testing. Complete reports, with a review of test set-up plans and variables, can be found at www.epa. org or www.nsf.org.

The effect of conditioning
A quick review of the test results indicates a few things. First, it was evident that much like ultraviolet (UV), where there is a burn-in period, RO membranes undergo a similar process. This became apparent in comparing the test results on the POU systems where the conditioned units performed significantly better and had a lower standard deviation between systems than the unconditioned units did. It appears this process takes somewhere between one and three weeks for the RO membrane to stabilize. This is an interesting fact, as most standard testing is conducted on RO systems right out of the box; in actuality, the system should perform better after only a week of conditioning.

Additionally, it was encouraging to see that after a short 24-day conditioning period, the small POU units obtained between a 6.7 and 8.4 log reduction for bacteria and 3.9 and 4.8 log reduction for viruses. Keep in mind that in order to legally use the term purifier for a water treatment system, you must obtain six log reductions for bacteria and four log for virus. This is only a quick test and does not represent any certification as a purifier; however, the tests showed extremely favorable results of the RO’s ability to be a significant part of a home water purification system.

Similarly, the whole-house unit performed very well with no conditioning period at all, obtaining a 2.5 and 3.5 log reduction for bacteria and 2.9 and 3.1 for virus. Based upon the results obtained during the smaller POE unit testing, one can anticipate the performance of the whole-house RO unit to increase over the first three weeks and then stabilize.

Chemical agents testing
As with the biological testing, both POU and POE RO units were tested for chemical agents in the water. Again, it simulated an intentional or non-intentional, short-term chemical contamination event. Unlike the biological evaluation, a specialty volatile organic chemical (VOC) filter was evaluated here. The chemical agents were first passed through just the RO membrane in order to evaluate the membranes’ ability to reduce these chemicals. Following this initial evaluation, the post filters were tested to show complete system capability. The organic and inorganic contaminants in Table 4 were evaluated for the POU and/or the POE RO systems.
­

On the POU side of the testing, the RO membranes were challenged with each chemical at a target challenge concentration of one mg/L. This chemical challenge concentration is much higher than most levels in the NSF/ANSI standards for POU devices, but was done intentionally for this US EPA/ETV testing.
Based upon the results obtained on the microbiological testing, membranes underwent a seven-day/seven tank-fills conditioning period.

In order to load the carbon filters to a degree that simulated contaminant loading in the middle of their effective lifespan, the carbon post filter was exposed to 300 µg/L of chloroform water until 300 gallons (1/2 of the NSF VOC Certification capacity) passed through the filter. The RO membrane treatment process removed 98 percent or more of all challenge chemicals but benzene, chloroform and mercury. Based on the significant reductions obtained with the RO alone, the system post filter was challenged only with chloroform, dichlorvos, mercury and methomyl (see Tables 5 and 6).

Chemical agent results
Again, full reports are available online; however, to review: the RO membrane alone removed greater than 96 percent of all challenge chemicals except benzene, chloroform and mercury. When tested with the VOC post carbon block filter, the data shows that the combined RO and carbon block system would remove 98 percent or more of all challenge chemicals, with the vast majority being reduced over 99 percent

As we all know by now, the regulated level for arsenic has officially been reduced from 50 ppb to 10.0 ppb. Due to this regulation, there has been a slew of testing conducted on numerous treatment systems for arsenic reduction over the past five years. Table 7 is a summary of testing conducted either through our commercial RO US EPA/ETV report or the extensive number of POU projects that we currently have up and running.

The results indicate the overwhelming success of RO membranes for arsenic reduction. In the POU projects now running, there is a wide range of raw water parameters being introduced to these RO units. Mostly, the systems are seeing elevated levels of hardness (20 to 30 grains), but very little iron. Additionally, a number of the systems have high silica, nitrates, fluoride and excessive TDS, all being handled exceptionally well by the RO membrane. Our oldest POU program, which has 25 to 28 grains of hardness, has been running since 2003 and has just recently undergone a membrane replacement.

These test results support that over a wide range of raw water chemistry, RO is a highly dependable technique for the reduction of arsenic. Of particular note are the results that we have obtained on arsenite (arsenic III). Around the industry, one continually hears that RO is great for arsenate (arsenic V) but not good for reducing arsenite. These studies (and others conducted by the US EPA) indicate that, in fact, RO does quite well reducing arsenite from the water. On average, an RO membrane will remove 95 to 99 percent of arsenate and 60 to 75 percent of arsenite from the water.

Conclusion
Whether you are looking to use RO systems as a pretreatment system for commercial equipment, as a means for well head treatment at a municipality, for desalination or POU for compliance, RO is a robust product, capable of working over extremely wide ranges of raw water parameters, that provides consistent results. The added value of the RO unit over other water treatment techniques is that RO is capable of handling incidental spikes in water contaminants like viral, biological and even chemical agents, while maintaining safe and reliable water for all purposes, including the most important one—safe drinking water.

About the author
Shannon P. Murphy is Vice President of Municipal Water Programs for Watts Premier Inc., a division of Watts Water Technologies, of North Andover, Mass. Murphy holds a Bachelor’s degree in biology from Concordia University in Montreal, Canada and a Master’s degree from Wayne State University in Detroit, Mich.. Murphy has been a member of the WC&P Technical Review Committee since 2004. He can be reached at MURPHYSP@watts.com.