Exploring a New Technology Paradigm
Does physical water treatment (PWT) work? That depends on who and where one asks the question. Time honored and respected in the British Isles, PWT is routinely scoffed at here in the United States. If it does work, under what circumstances? In what way?

Most familiar (or most infamous!) to WQA members are magnetic devices. When these enjoyed a flurry of public attention a number of years back, WQA formed a Magnetic Task Force that came to the conclusion that there were more questions than answers. In any case, magnetic devices are used as the treatment of choice by many throughout the EU and elsewhere.

Other PWT devices rely on electric fields (see No Salt Softeners—Fact or Fiction, WCP September 2006), ultrasonics, capacitive effects, high frequency and resonance phenomenon. For the most part, the manufacturers of these products sell them as scale prevention/elimination. While there is at present no NSF/ANSI or WQA standard against which to test this equipment, a protocol does exist in Germany, the DVGW W512. The evaluation of scale prevention using this test was developed by the German Technical and Scientific Association for Gas and Water. A scale prevention efficiency of 80 percent is necessary for a device to pass. Few of the many that undergo the testing achieve even that score. 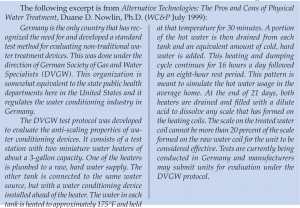 The newest PWT systems are neither electric fields nor magnets. Utilizing the process of crystallization, a well-known physical phenomenon, one new product uses specially treated polymer beads in a conventional mineral tank. Unlike any other alternative water treatment, this new media has scored 99.6 percent efficiency on the DVGW W512 test.

Figure 1: Heterogeneous nucleation. Geometrical parameters defining size and shape of a lenticular ß particle situated on a grain boundary in phase α for the case of isotropic surface energy.

Using polymer beads is certainly neither new nor unique, yet this media is different. First, there is no regeneration. Neither salts nor chemicals are required. A combination of the curved surface geometry and composition of these beads does something special to encourage what is called low energy heterogeneous nucleation. Low energy is self-explanatory; in this case the term is comparative, in the sense of many reactions either using or releasing significantly more energy than this crystallization process. Heterogeneous, according to Webster, is defined as being composed of unrelated or unlike elements or parts. Miscellaneous, basically. Nucleation is the act of forming in or around a nucleus and has come to define a phase transition.

For a scientific illustration of this process, we turned to the Massachusetts Institute of Technology, that defines it as follows:

Heterogeneous nucleation can occur on imperfections when the nucleating particle effectively “replaces” some energetic feature of the original configuration. For instance, nucleation on a grain boundary (see Figure 1) removes grain boundary area and replaces it with interphase boundary area that would have been created anyway by formation of the new phase. Thus, preexisting imperfections effectively “catalyze” the nucleation process. 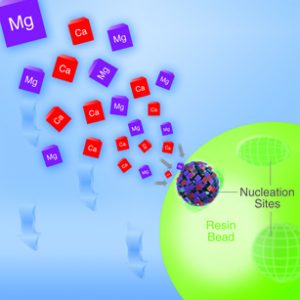 Heterogeneous nucleation is a commonly observed phenomenon. Heterogeneous nucleation can be understood by considerations of the geometry of the nucleus. A simple model for the case of nucleation of a new phase on an isotropic grain boundary can be obtained by assuming that the nuclei have the shape of two hemispherical caps that abut with an equilibrium dihedral angle given by the Young force balance equation. The model equations can be derived in a parallel to the critical spherical nucleus size that balanced the rate of volumetric energy decrease with the rate of interfacial energy increase.

1. Rcrit is the same as for homogeneous nucleation—this makes sense as the critical chemical potential is a function of local curvature in the isotropic case.
2. ∆Gcrit is reduced proportionally to the volume reduction of the critical nucleus. 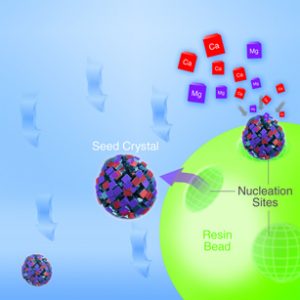 Back to that new media. Heterogeneous nucleation is only half of the picture. A proprietary process imprints a highly active catalytic template on the surface of those beads. Think of these templates—and there are billions of them—as groups of atoms arranged to look like the perfect seed for hardness-selective crystal growth. They function as catalysts producing a lower energy path for hardness reactants to crystallize. It is also where the technology derives its name: Template Assisted Crystallization (TAC).

Nucleation is the step where the solute molecules dispersed in the solvent start to gather to create clusters in the nanometer scale (elevating solute concentration in a small region) as to become stable under the current operating conditions. These stable clusters constitute the nuclei. However, when the clusters are not stable, they redissolve. Therefore, the clusters need to reach a critical size in order to become stable nuclei. Such critical size is dictated by the operating conditions (temperature, supersaturation, irregularities, etc.). It is at the stage of nucleation that the atoms arrange in a defined and periodic manner that defines the crystal structure, a specific term refering only to the internal arrangement of the atoms, not to the physical external macroscopic properties of the crystal, its size or shape.

Crystal growth is the subsequent growth of those nuclei that succeeded in achieving critical cluster size. Subsequently, nucleation and growth continue to occur simultaneously while the supersaturation exists. Supersaturation is the driving force of the crystallization, hence the rate of nucleation and growth is driven by the existing supersaturation in the solution. Depending upon the conditions, either nucleation or growth may be predominant over the other and as a result, crystals with different sizes and shapes are obtained. Control of crystal size and shape constitutes one of the main challenges in industrial manufacturing, such as for pharmaceuticals.

Returning to the PWT media, the imprinted polymer beads, by acting as nucleation sites for crystallization of calcium and magnesium, transform these hardness minerals from the dissolved state into undissolved sub-microscopic crystals. This shift in physical states is extremely fast: to use ion-exchange softening measurements, it would be rated at 100 gpm per cubic ft. Therefore, for practical applications, the PWT media is used in liter quantities instead of cubic foot quantities.

The TAC process
A ball rolls downhill (after a little push, that is) to seek a lower energy state. Crystal formation from a solution is a result of this same natural inclination toward lower energy states; the little push needed is nucleation, where clusters of atoms and molecules (calcium carbonate, for instance) start organizing, either within the bulk solution or on some surface. The solution’s conditions: concentration, temperature, etc., as well as the nature of its surface, determine the likelihood and future of this event. Once initiated beyond a critical state, hardness nucleation, for instance, induces other dissolved cations (Ca+2, Mg+2) and anions (CO3-2, SO4-2) in solution to group together and form an organized, undissolved crystal structure. These crystals will then keep forming until some new equilibrium is reached.

While it would seem logical to then remove these crystals, it is their continued presence that keeps the process going, providing continuous scale prevention downstream of their initial formation.

With TAC technology, the nucleation conditions are essentially rigged to assure hyper-fast crystallization. When hard water contacts this media, an avalanche of sub-microscopic hardness crystals instantly forms on the bead surfaces and then breaks away, allowing the templates to induce additional crystallization in the flowing water. There is a secondary process (homogeneous nucleation) that completes the treatment. The now free-floating sub-microscopic hardness crystals continue to function as new nucleation sites and induce additional dissolved hardness to continue to form crystals in the bulk solution.

This crystallization of the hardness minerals means that they are now unavailable to nucleate downstream on the surfaces of just about anything subject to scaling, even when the conditions would otherwise favor it. They are, to put it simply, otherwise occupied, choosing the lower energy state opportunity that TAC offers.

One of the interesting but fundamental side benefits of this TAC process is the release of carbon dioxide into solution.

The CO2 then reacts with the water to form carbonic acid, H2CO3, which results in a lowering of the pH of the water.

The benefit is that the equilibrium of the water chemistry shifts to a state that slightly favors dissolving existing scale. The extent of this depends on the overall water chemistry. In most cases where observation and monitoring were conducted, the scaled surfaces lost their deposits over time.

The manufacturing process
A specific variety of polymer resin beads are exposed to a series of chemical processes in what chemical engineers call a ‘chemical reactor’: a completely enclosed stainless steel tank in which the physical conditions of temperature, pressure, pH, agitation, etc., are precisely regulated while chemical reactants are introduced in programmed succession. When the process is complete, the media is ready to perform. The final product is chemically very clean and recently passed NSF 42 toxicology testing.

Installation
At first, it looks fairly traditional. An installation starts with standard fiberglass wound tanks and the media is put inside. There’s no need for a control valve or brine tank. The basic configuration is a tank with an in/out head for smaller models (up to about 30 gpm). Larger systems are configured with top and bottom connections.

The biggest difference with TAC media is upflow. The media works best when water flows up through it, keeping it fluidized. This maximizes the interaction between the hardness ions and the media surface templates, while helping to transport the sub-microscopic crystals from the media surfaces into the bulk flow.
The media depth is typically less than six inches, so TAC systems are also extremely lightweight and easily transported. The general rule is that each liter of media can treat up to four gpm. For commercial systems, this effect is even more dramatic. A 16 x 65-foot tank can easily treat a flow up to 75 gpm.

Conclusion
While there was a time when snake oil and mirrors were being foisted on unsuspecting customers as water treatment devices, today’s alternative physical water treatment technologies are legitimately making use of science’s latest discoveries. The result is untraditional means to accomplishing water treatment goals.

It is time to allow scientific proof to be the final judge. With an established standard and test protocol, the capabilities and limitations of different devices will become better understood—leading to better products. In the coming months, WQA is participating with the IAMPO in a subcommittee researching these devices seeking to establish protocols. Dealers and their customers will ultimately be the beneficiaries of a fresh look at the alternatives. Science is changing every day as new methods provide new insights. As an industry, we must evolve with that knowledge.

About the technology
TAC is available in the marketplace today. The best example is ScaleStop™ by Next™ Filtration Technologies, Inc., 6542 Hypoluxo Road, Suite 362, Lake Worth FL 33467; (800) 783-0310; visit the website www.nextfiltration.com or email sales@next filtration.com